A Look at Small-scale Coffee Production in Colombia 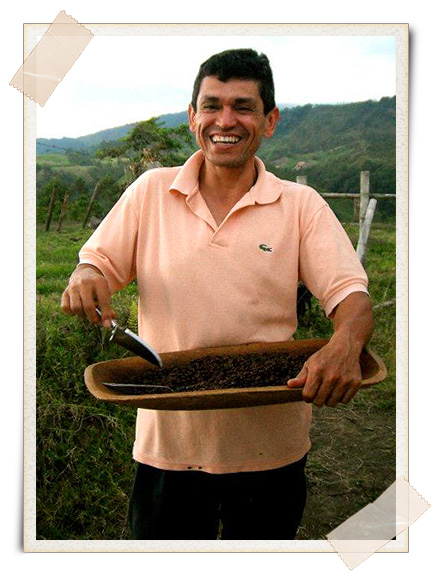 Coffee is one of those crops that seem to defy traditional categorization. It has taken on a life and purpose above and beyond that of nourishment or delight that we associate with most food and beverage products. Throughout all corners of the world it has established itself as a venerable staple of countless cultures. Coffee’s heightened status may be due to that mild stimulating effect appreciated by so many, its association with individual ritual and routine, or its ability to connect people through a reunion between friends or a first date between strangers. Beyond that, its warmth, flavor, and aroma speak to the human senses in a manner representative of utter comfort. Perhaps it is no surprise that the coffee trade accounts for a large percentage of international commerce, but few would believe that it is second only to petroleum as the most traded product in the world. Despite its widespread consumption, the coffee plant is cultivated only in certain areas accommodating to its distinctive climatic preferences, which are generally tropical and between 1200 to 1600 meters above sea level. Much of the final product is consumed far from its origins but both the producer and consumer are linked through socio-economic factors and dependent upon one another. The relationship invites investigation and here we will examine one particular source of The Bean.

In recent years Brazil and Vietnam have surpassed it as the top two coffee growing nations, but in the hearts and minds of many there remains only one country synonymous with a quality cup of Joe, and that would be Colombia. The first seeds arrived there around the mid 19th century and commercial production commenced shortly thereafter. Though consolidation and corporate pressures have created many large scale plantations, the independent farmer has always occupied a crucial role in the industry, culture, and national history of Colombia and one man who takes a great sense of pride in that fact is Pedro Burgos. An agricultural engineer by trade and a naturalist at heart, Pedro learned soon after finishing his education that commercial coffee farming was in his blood, but not his future. With the support of his wife, Maryori, and their two daughters, he set forth on a course different from the traditional trajectory followed by many of his peers. The couple acquired about 14 acres of land near the town of Salento in the Quindio river valley, historically and currently a major center of coffee production. They purchased the land from an elderly man that had grown coffee for nearly half a century and they called it Reserva Café Sachamama, or “Mother Forest Coffee Reserve.”

Pedro and Maryori are passionate about the natural world and have adopted the practice of managing their land as stewards rather than owners. To walk with them through Sachamama can be a slow process because of their desire to stop and identify every plant species or pause to observe any sort of animal or insect activity. Their eyes come alive with a child like exuberance when they are in their forest. And this forest is truly theirs. Immediately after acquiring the property they set about a slow process of reforestation through transplanting and culling of many native plant species, a deliberate effort that continues through present day.  They have blended this restoration operation with small-scale cultivation of Coffea arabica, a variety prized for its flavor and adaptability. Some of the coffee shrubs on their property are close to 60 years old, with epiphytes and mosses growing on the branches and the plants themselves sprawling nearly 15 feet both vertically and horizontally. The standard commercial plant is pruned, fertilized, and stripped of its beans intensively with an average life expectancy of eight years and often grown in rolling green acres of perfectly straight rows as far as the eye can see. The problem with that approach is that the coffee plant is best suited to a tropical climate with significant altitude. The regions where the plant thrives are usually some of the most bio-diverse on the planet yet the modern day tactic is to clear-cut areas that would otherwise host a plethora of different plant species supporting a widely varied ecosystem.  That is why the term “shade grown” coffee is becoming increasingly important in marketing and consumer preference. The term could likely be contested by many agencies or experts and the true adherence of those companies or growers to their claim of “shade grown” may have some gray area.

Pedro harvests his own variety of “forest-grown” coffee and an amble around his property proves it. On 14 acres he has about 500 coffee plants versus 3,000-4,000 per acre on a commercial plantation. Though Pedro had the chance to enter the industrial side of the field, he gravitated towards a different approach. He was less focused on instantaneous profit and long term damage. He became more interested in ecology and natural systems than monoculture. His approach was largely untested and completely unheard of in the region. At first, he claims, even he had doubts about his own alternative mindset and theories, but when an Italian couple came for a visit a few years back they told him about Terra Madre (an Italian organization behind Slow Food) and Pedro said the network gave him hope. “It proved to me that I was on the right path,” he says, “and validated a lot of what I was trying to do.”

Pedro’s commitment to the environment and unwillingness to compromise his integrity has created a product of supreme quality. His ecologically sensitively grown coffee may have inadvertently caused subtle benefits. Coffee beans are considered hydroscopic, meaning they take up water in the surrounding atmosphere in greater concentrations than most plants. With water comes aroma and flavor captured in the immediate vicinity. Maryori will gleefully inform any visitor that coffee harvested when a nearby fragrant orchid is in full bloom will absorb those floral notes and taste (perhaps by that same token, when a true connoisseur drinks cheap industrial coffee that person could detect faint hints of pesticide and farm workers’ misery). Additionally, Sachamama differs from “conventional” coffee farms in that Pedro and Maryori bring the process full circle by hand roasting and packaging all of their beans. Most large scale operations ship the dried bean to processing facilities far from the plantation. At Sachamama, the berry is first harvested, and then the skin and fruit surrounding the seed is removed by a manual crank apparatus. Next, the seed is fermented in tightly sealed buckets for a little less than a day and sun dried for several weeks. The final stage involves roasting in small batches. Not only does the whole process require patience and diligence, but the time from flower to mature fruit requires an additional 9 month wait.

In general, the cultivation and preparation of coffee is an exercise in discipline and, for Pedro and his family, a labor of love. He is not merely selling a product, and the customer is not just buying it. He speaks with conviction when he explains that the exchange of goods between people can represent a deeper cultural interaction, especially with food and beverage. Every product can have a history that explains a bit about its origins and the path it travelled to eventually end up before the consumer. When asked if he would like to distribute his product more widely throughout the country or internationally to perhaps engage in a distant cultural exchange of his own he scoffs at the question. “Why would I want to do that? I sell my product here in the community where I live and that is the way I like it.” His response demonstrates a man committed to focusing on improvement and quality of life in his own world, a message from which we could all benefit.