Agroforestry: The Art of Farming With Trees 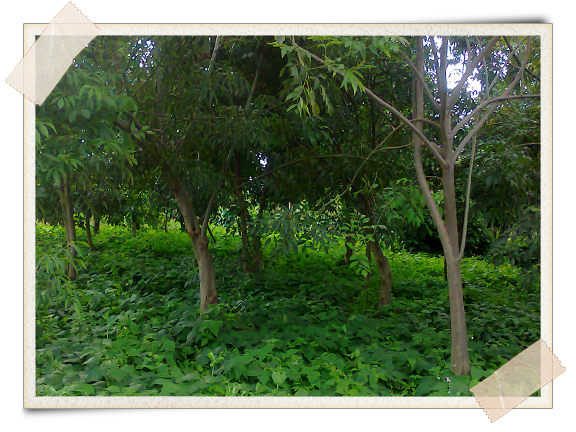 Kenya is an agricultural country, endowed with an abundance of fertile soils. Farming serves as the most important economic activity for up to 80 per cent of its population. Out of this majority, a large number are small scale farmers, owning plots of less than five acres of land across the country.

Small scale farmers play a key economic role, not only in food production, but by contributing to self employment and boosting the local economies all over the country. As the UN Special Rapporteur on right to food affirms: “small scale farming is creating employment and contributing to rural development…it is better at preserving ecosystems because farmers combine various plants, trees and animals on the piece of land.”

Like any other pursuit, small scale farming is fraught with challenges that prevent farmers from reaching their full potential. Obstacles range from: [1] Depletion of soils resulting from constant overuse of the same “shamba”- a Swahili word for land.  [2] Lack of information on sustainable farming approaches [3] pest and disease management and to [4] drought, extreme precipitation and cold weathers.

Despite all these setbacks, efforts to end hunger and keep the land productive, however small, are now geared toward low-cost, sustainable approaches to farming. Agroforesty is now prominent among these solutions, deemed as the next agricultural solution to feed the world; it is defined as a dynamic and ecological method of land management involving the simultaneous cultivation of farm crops and trees.

Agroforestry combines agricultural and forestry techniques to create more varied productive, profitable, healthy, and sustainable approaches to land use. It diversifies and sustains production for increased social, economic, and environmental benefits on plots of land of any size.

Having been practiced by farmers for decades, agroforestry focuses on a wide range of trees that act as fertilizers, soil improvers, fruit providers, fodder, fuel wood, and medicine. Today, trees in farms are seen as a crucial bridge between forestry and agriculture, striking a balance between conservation and production. While Kenya’s forests diminish, more trees are being planted in farms, and small scale farmers are doing this for their own benefit and that of Mother Nature. More so, it is a strategy to compliment the 10% forest cover advocated by the Kenyan government.

Representing Kenya’s agroforestry for this article is John’s small plot; trees form part of his farming endeavors. Through this noble partnership, he has experienced a constant production of food and other tree products in a rejuvenated soil. He says that, if done well, agroforestry offers the best use of land if joined with good agricultural practices, such as organic farming. “It thus increases resiliency towards fighting hunger,” he adds.

John Chepsoi, 45 year old small scale farmer  living in Nakuru, North west of Nairobi has incorporated trees which do not compete with his crops (silvoarable system), but bring in multiple benefits to him, his livestock, crops, soil, and the environment at large. They are Nitrogen Fixing Trees (NFTs).

It began when he planted a few trees on a section of the plot four years back. He observed that the soil in the area with the trees usually looked fertile and alive. The crops were healthier and yielded more compared to the bare land. This led him to introduce more trees on his plot to increase fertility and increase production. He has harvested potatoes and his beans are blossoming. He is expecting a good harvest this season as he says all systems are functioning well under this agroforestry method of farming. 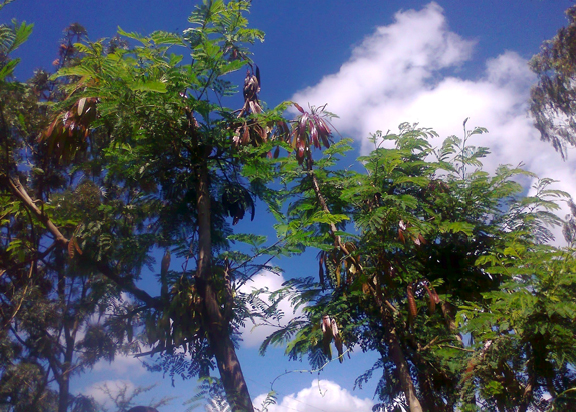 Walking round his farm, trees which are fast maturing and able to fix nitrogen in the soil are planted; he uses these trees as fodder for livestock and also as fire wood. When cut, he says that they are able to coppice again, hence avoiding the urge to invade the forest. Some of these trees include: grevillea, luceana, calliandra, acacia and sesbania sesban. The Kenya Forestry Research Institute (KEFRI) provides useful information to field workers and farmers on different useful trees that can be planted in farmland. (www.kefri.org

One example of the acacia tree, which has long been combined with traditional farming in Africa, is the Faidherbia albida, also known as “Mgunga” in Swahili. It possesses the unique ability to produce much needed nitrogen for the soil and plants. With its phenology, Faidherbia goes dormant and sheds its nitrogen-rich leaves during the early rainy season, when crops are being planted, and resumes leaf growth in the dry season.

The air we breathe consists of approximately 80% nitrogen gas. This Nitrogen is normally unavailable to plants, but nature has devised a unique way to cycle those nutrients through the trees. This is done through Nitrogen Fixing Trees (NFTs) which are able to utilize the atmospheric nitrogen through an association with a Rhizobium, a bacterium which is hosted in the root system of nitrogen fixing trees. These plants biologically accumulate nitrogen by pulling essential nutrients out of the air for their own use, and if managed well, can make it available to other crops as well. This reduces the need for commercial nitrogen fertilizers.

Through an agroforestry system, John farms without the application of synthetic fertilizers (DAP/CAN) commonly used by many farmers, but lets nature perform this duty through NFTs.  His style of farming has been a productive and conservative one, and he sees these as a long-term strategy and is happy he followed the path of agroforestry.  “The goodness of agroforest trees is that they are there to offer their free services all year round,” he adds. 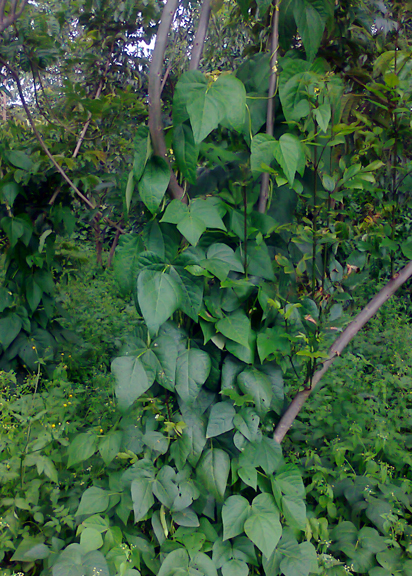 a bean climbing one of the trees

He is planning to establish an agroforestry nursery in the future where he can raise and sell seedlings to other farmers, in the effort of spreading the benefits of agroforestry in building sustainable future and earning income.

John explains that during the dry season, from December to March, some trees are able to shed their leaves, while others remain green, which he uses to feed his livestock. He further says that producing staple food crops like maize, sorghum and millet under these agroforestry conditions dramatically increases their drought resilience in dry years because of the positive soil moisture and better microclimate.

The fallen leaves, weeds and crop residues don’t go to waste. They are heaped to naturally decompose and later used to fertilize the farm. John is keen not to throw away any of this, as he calls it a treasure. After they are heaped, they usually attract many beneficial micro organisms, which feed on them.  As we turn a heap together, there were hundreds of earthworms at work. Earthworms are described as “ecosystem engineers.” Charles Darwin referred them as “Earth ploughs.” They contribute to enriching and improving soil for plants, animals and even humans. Earthworms create tunnels in the soil by burrowing, which aerates the soil to allow air, water and nutrients to reach deep within the soil. Earthworms eat the soil which has organic matter. After the organic matter is digested, the earthworms release waste from their bodies, called castings, which contain many nutrients for the crops. As an important addition to their other roles, trees not only act as natural fertilizers, but as niche for these hardworking earthworms and microbial life.

Through constant pruning and cutting firewood, he is able to increase the organic matter (leaves) in the soil, which act as mulch, keeping it moist and well aerated, and increases the activity and population of microbial life in the soil. The leaves also act as humus, a very important feature in building soil fertility.

John also acknowledges that trees are able to suppress weeds, reducing the time and energy needed for weeding, and promoting “easy to work” soil. Other trees, like luecena, attract bees during flowering. While collecting nectar, they help in pollination and repelling harmful insects. Trees here are able to provide a microclimate. The place is cool, and you could feel the breeze. John says he is able to work without feeling the hot sun, and the same applies to the crops. “These trees protect my crops from both dry season and heavy rains,” John says. And adds that, “it conserves soils and reduces run off in my small plot.” 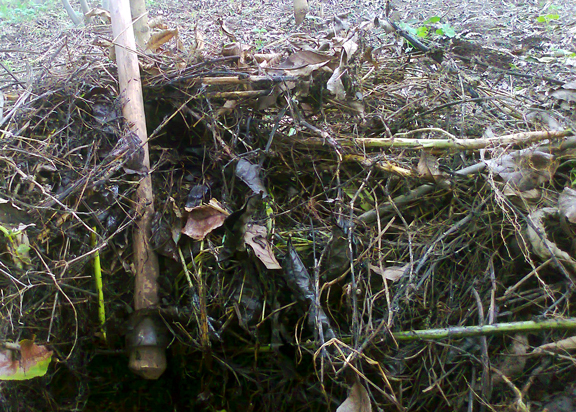 NFTs may be integrated into a system in many different ways; including clump plantings, alley cropping, contour hedgerows, shelter belts, or single distribution planting.

With growing concerns about how small holder farmers can continue to feed themselves in their small farms without destroying local ecosystems agroforestry is the best thing to happen to sustainable farming. I applaud small scale farmers like John and hope that other small scale farmers will follow suit and plant trees on their farms for a better and more productive future.