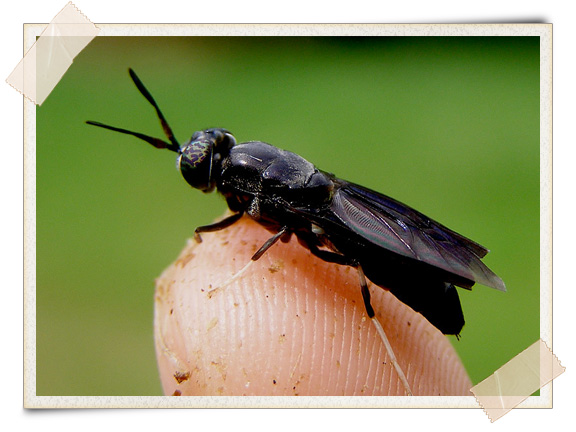 Black soldier fly (BSF) adults are attracted to mesophilic storage units as an ideal site to lay eggs. Once BSF larvae reach maturity within the storage unit, they easily find a way out through the aeration holes. They then dig down into the soil where they pupate and later emerge as adults. The storage units therefore serve as ideal seeding units for the promotion of an abundant wild population of BSF. But why cultivate BSF larvae?

BSF larvae are some of the most voracious eaters within the natural world. They can effect as much as a 20-fold reduction in the weight and volume of food waste in a period of less than 24 hours. In an area of only one square meter, they can eat up to 40 kg of fresh food waste per day. And for each 100 kg of food waste, there are roughly 20 kg of nutrients of a high protein (42%) and fat (34%) content. BSF larvae can eat just about any type of fresh putrescent waste, even meat and dairy products.

The functioning of a mesophilic bin is in no way comprised if BSF larvae are not present. Mesophilic decomposition is driven mainly by bacteria, fungi, actinomycetes, protozoa and rotifers – all operating at mesophilic temperatures. But when BSF larvae are present, a bin that might ordinarily handle 3 kg’s of food waste per day, becomes supercharged and can handle as much as 30 kg’s per day. The size and capacity of a bin, however, must always be rated or configured based on its functioning without BSF larvae.

BSF larvae thrive in the presence of salt, ammonia and food toxins. They can easily digest food waste that is far too toxic to feed to pigs or other animals. It takes them roughly two hours to die when submerged in rubbing alcohol. They can be centrifuged at 2,000 g without harming them in any way. They are tough, robust and adaptable.

BSF larvae emit a distinctive odor that drives away all other species of flies. This is a mild odor that can be sensed by humans but in no way is it offensive. BSF adults do not bite or pester humans. They do not have functional mouth parts. They do not eat, or regurgitate on human food. They do not go into houses. They have never been associated in any way with the transmission of disease.

After about two weeks of incessant eating, the larvae mature. These prepupal larvae then set out in search of a dark, dry place where they can pupate. They search the periphery of the waste, and if, within a container, they are provided with two small ramps, they easily crawl up and out of the waste. The two ramps spiral up (left and right) to the top of the container where an exit hole is provided. The larvae then fall into a bucket. This special container, called a biopod, has no moving parts. It requires no energy, no electricity, no fuel, no chemicals – nothing, not even water. 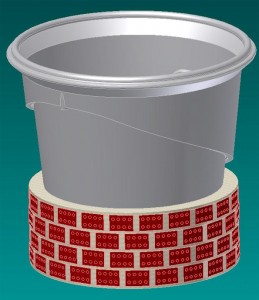 Two sizes of biopod are now being manufactured in Vietnam: 2-foot and 4-foot. The 2-foot is ideal for household use. A household wishing to enhance the capture of larvae can operate a 2-foot unit alongside a mesophilic bin. The 4-foot is designed for small-scale commercial use. This larger unit can handle up to 40 kg’s of waste per day.

The liquids draining from the bottom of the biopod should be allowed to flow into a bed of dry biomass. Biochar and effective micro-organisms can be added to the biomass. The drawing on the left shows a 4-foot biopod positioned on a mesophilic bin of a height of only 36 cm. The liquids that drain into the bin are never allowed to turn anaerobic. The mesophilic residue from this bin, rich in nitrogen, can later be incorporated into a thermophilic composting operation.

From a third to a half of larval fresh weight can be processed into a dry meal that has roughly the same value as Menhaden fish meal valued at about $1,200 US dollars per ton. Of course, not all fresh weight converts into dry meal due to the moisture content of fresh larvae. Also, about 3% to 5% of the harvested larvae should not be processed and sold, or otherwise consumed. They should be stored under protected conditions until they emerge as adults. These adults should then be released into the wild so as to maintain an abundant population of egg-laying females.

BSF technology is not in itself a total solution in the disposal of putrescent waste, due to the fact that larvae leave behind a small fraction of waste or residue. But BSF residue to the red worm is not a waste: it constitutes an ideal substrate. In fact red worms grow 2 to 3 times faster on BSF residue than on partially decomposed food waste. Professor Tran Tan Viet of the University of Forestry and Agriculture in HCMC has carefully studied the mutually beneficial relationship between BSF larvae and red worms in disposing of putrescent waste.

BSF larvae digest fresh putrescent waste, something that red worms cannot do, and red worms digest the more recalcitrant cellulosic materials, something that larvae cannot do. Together they form a perfect partnership, recovering all possible nutrients. Red worm residue (or castings) constitutes one of the best growing mediums for plants. It effects an enormous reduction in the amount of fertilizer required to grow plants: 3
A study in Connecticut (Lunt and Jacobson, 1944) reported worm castings increase the nutrient availability of the soil by 1.4 fold for calcium (Ca), 3.0 fold for magnesium (Mg), 11.2 fold for potassium (K), 7.4 fold for phosphorus, and 4.7 fold for nitrate-nitrogen (NO3–N).

Red worms are commonly fed to shrimp in Vietnam to suppress disease. Chickens fed small quantities of red worms consume less feed and have a higher growth rate than chickens not receiving this supplement.3 Pigs in the wild thrive on insects and worms, and worms in the diets of pigs reduce the incidence of disease.

Red worm castings sell in Vietnam for as much as $500 US dollars (10,000,000 VND) per ton. Therefore the contents of the mesophilic storage units acquire considerable value, if further processed by red worms. Mesophilic residue could be collected, shredded and processed by scavengers in small-scale vermi-composting facilities. Scavengers might even be forced to buy this residue from households, just as they now buy recyclables. Note that the city would not have to clean out mesophilic units or transport residue. Scavengers would do this based purely on the value of the mesophilic residue.

Before concluding this section on BSF/red worm bioconversion, we must address doubts that some have expressed about the existence of BSF in Vietnam.
As previously noted, BSF adults are far from being a pest, and because of their benign and unobtrusive behavior, they are not easily noticed. Most Vietnamese, when shown a picture of BSF adults or larvae, would say that they have never seen them before. Yet as any Vietnamese entomologist will readily confirm, they are present throughout Vietnam, from north to south, from hot tropical coastal areas to cool mountainous highlands.

I have seen them in waste dumps and manure piles throughout the Mekong. They are abundant in every district of Ho Chi Minh City. I have even observed BSF larvae in a biopod set up on a second-floor patio of an apartment house in District 5. They are even present in Dalat at 1,500 meters above sea level.

Right before Tet 2011, the Water Supply and Sanitation Project in Binh Dinh Province commissioned a study to verify the presence of BSF in Binh Dinh province. 4 Todd Hyman, who conducted the study, visited all of the dumpsites in four districts of the province. He had no problem finding and photographing BSF larvae and adults on all of these sites.

If putrescent waste is made available to them under the right conditions, BSF larvae appear naturally from wild populations. In tropical areas, BSF larvae usually appear within 7 to 10 days. The manual seeding of a bin or pod with young larvae is normally not necessary.