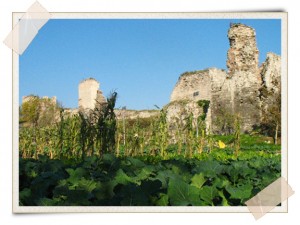 “As you pass through one of the gates entering into the ancient city, you might catch a glimpse of a thin strip of emerald-green vegetable orchards along these monumental walls.”

Istanbul, which is one of the largest cities in the world, has undergone substantial development over the past several decades. Istanbul grew dramatically beginning in the 1980s and 1990s, with its population expanding from a few million to more than 13 million today, due in large part to an influx of migrants to the city. As Istanbul has evolved into a major city, one reason that its character has undergone dramatic changes is that the Turkish government has made Istanbul’s physical, environmental, and social “urban destruction and reconstruction” one of its priorities. One result of both Istanbul’s population growth and urban development has been a transformation of the city’s landscape. 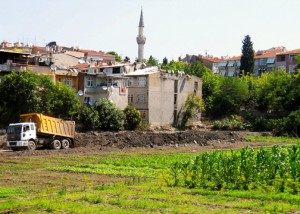 More specifically, Istanbul has become increasingly developed over the past several decades, with the result that urban gardens that have long existed throughout the city have become increasingly scarce. In Turkey, these vegetable gardens, or traditional market gardens, are referred to as bostans. Oktay, who defines bostans as “vegetable gardens and patches,” notes that bostans traditionally acted as boundaries and contributed to “self-sufficiency” within urban areas, including Istanbul. Tuğba notes that bostans are typically small gardens or orchards limited to about four to five acres in size, and a few individuals – typically members of the same family – tend each bostan. According to Başer and Tunçay, both peri-urban and intra-urban agriculture have enjoyed a long history in Istanbul, and bostans have long been a common feature throughout the city. Even in pre-Ottoman times, gardens were grown alongside Istanbul’s Theodosian city walls, because the walls provided storage for harvested crops. In addition, wells near the city walls offered regular and reliable sources of water necessary to maintain the bostans. As Istanbul subsequently expanded in size, and grew in terms of its population during Ottoman times, orchards, crop fields, and vegetable gardens became a commonplace feature in the city. The number of gardens throughout Istanbul also likely grew, due, in part, to the arrival of migrants who brought their traditions and knowledge of gardening along with them when they settled in the city. 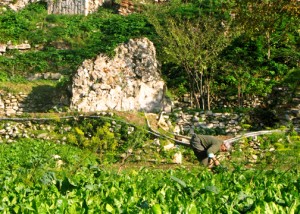 By 1900, Thackara estimates that there were more than 1,200 bostans covering 12 square kilometers on both sides of the Bosporus. As a result, until “well into the twentieth century,” most of the fruits and vegetables consumed in Istanbul came from local gardens and orchards that were close enough to the urban population where sellers could easily transport produce to city customers. Urban gardens were part of the fabric of city life in Istanbul. Kaldjian notes that bostancis or master bostan gardeners were seen “as experts, organized in guilds, and held in high esteem,” and their vegetables were “sold in wholesale and retail markets” as an integrated part of Istanbul’s food and commercial networks. Tuğba emphasizes that bostancis grew fruits and vegetables in order to sell them, as the crops were not used purely for home consumption. Overall, according to Oktay, Istanbul “possessed various attributes that generated an ecologically sustainable environment,” including small-scale gardens throughout the city. 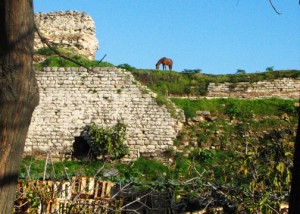 The number of bostans in Istanbul remained largely stable until the 1950s, when bostans began disappearing partly as a result of the rapid growth of the city. At present, Kaldjian writes that bostans’ “verdant contribution to Istanbul life” has largely been “paved under for public and private uses,” in part because bostancis are largely powerless in the face of “intense competition for metropolitan space.” Another reason for the decrease in bostans is that the gardens are maintained only by “back-breaking, risk-laden, and politically insignificant work of producing and selling vegetables,” and, further, such work “pales in comparison to revenues from a multi-story apartment block.” By one estimate, there are currently some 1,000 bostans remaining in the greater metropolitan region on the Asian side of Istanbul, but this may be an optimistic guess, and the size of individual bostans has likely decreased since the early part of the twentieth century. Many of Istanbul’s bostans are also “still to be found in the southern part of the [Theodosian] wall,” where the land is municipally-owned and rented to families who grow beets, carrots, salads, and other vegetables, and herbs. In sum, bostans still exist throughout Istanbul and its periphery; however, these gardens have been “all but eliminated by urban growth” and they have been “pushed to the margins of urban space.” 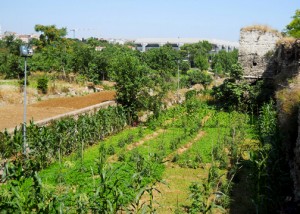 In light of the changes that have marginalized bostans, it is unclear at present whether urban gardening in Istanbul will undergo a revival. Along with the pressures of population growth and urban development in Istanbul, it is also the case that urban gardeners’ experience and knowledge are not very likely to be passed on to future generations. Based on interviews he conducted nearly two decades ago, Tuğba writes that the bostancis that he spoke with expressed concern that they would be “expelled from their plots in the near future,” and many bostancis had, at that time, already sold their plots to parties uninterested in maintaining urban gardens.

At the same time, Thackara suggests that there are signs of interest in reviving the bostan tradition in Istanbul. For example, members of Yeryuzu Dernegi (Earth Association) aim to promote the spread of urban gardens in Istanbul, and the organization offers classes on permaculture and information on how to transform unused spaces into gardens. In addition, a number of different entities, including urban planners, historians, and representatives of non-profit organizations, have an interest in preserving and revitalizing bostans, and they are actively pursuing those goals. Bostans have garnered attention for many reasons: they provide food and greenery in an urban setting, they preserve Istanbul’s rich history, and they offer focal points for families, neighbors, and communities. These urban gardens also “generate high value crops” in a location where fresh vegetables are a “culturally and nutritiously important component of the diet” and they “represent valuable jobs and important food sources.” At a time when leaders of cities around the world consider how best to address problems like food deserts and urban heat islands, bostans represent one small-scale solution that takes advantage of Istanbul’s past in order to secure its future.

To learn more about current threats to Bostans, you can read more at: