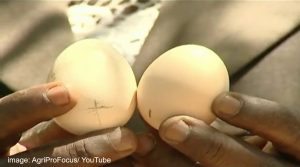 Christine Kilonzo has learned how to determine a chicken egg’s sex; she can distinguish between male and female chicken eggs by measuring the shape of the egg’s curve. Through careful examination, one can see that female eggs have a sharper curve than their more rounded male counterparts.For Christine’s purpose, it is essential that the female, not the male, eggs hatch. Using her method of measuring the curve of the egg to determine the sex, she separates the eggs. She then incubates only the female eggs are incubated. The male eggs are both eaten (a nutritious addition to her family’s diet) and sold to others in her community to eat.

The Kenyan government was so impressed with Christine’s innovation that she was invited to showcase her technique at the East-African Farmer Innovation Fair (EAFIF) in May 2013. Since then, many organizations (including Prolinnova, World Neighbors, USAID-Kenya, AgriProFocus, CGIAR, Internation Center for Research on Women (ICRW), Kenya Agriculture & Livestock Research Organization (KARLO), International Institute of Rural Reconstruction (IIRR), and Inades-Formation) have come together to support the documentation and dissemination of Christine’s knowledge and technique. You can watch their video of her innovation here.

Since implementing this technique, Christine greatly increased her income. Now, thanks to that higher income, she is able to send her children to school. (She relies on the income from selling the grown hen’s to pay for her children’s schooling.) Her children love the opportunity to learn and play with the youth in their community, and Christine is thrilled she can provide her children with the education they deserve.