Concerns about Lead in Urban Agriculture 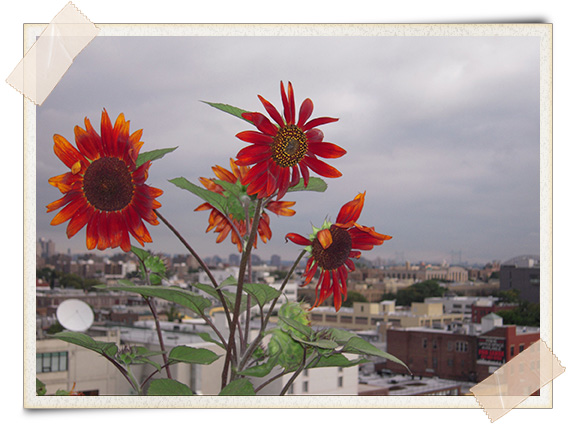 Hand in hand with the growth of public interest in local and organic produce is the increase in urban farms, community gardens, and backyard vegetable plots. Unfortunately, plants grown for consumption in the urban environment may contain a unique set of potential health hazards. Soil contamination by lead and other heavy metals can be present depending on exposure to air pollution, water pollution, and prior use of the land (Houlihan Turner 2009).

I became interested in the subject of potential contamination of urban soils after a visit to the Brooklyn Grange by Professor Tom Whitlow. He is a member of Cornell University’s Department of Horticulture, and has been conducting a research project at the Grange. His current project involves testing rain water samples for heavy metal particulates, as a way of measuring the safety of growing vegetables in an urban environment. To complete this project  he hopes to compare his findings to the results of samplings in rural areas. Since I have been interning at an urban farm, and supporting the urban agriculture movement whole heartedly, I wanted to inform myself about the possibility of lead making its way into the fruits and vegetables grown in cities.

The heavy metal worrying most consumers and growers of city grown produce is lead. While high doses of lead can cause vomiting, diarrhea, seizures, and even a coma or death, it is unlikely that this sort of exposure would be relevant to urban agriculture. Ingesting small amounts of lead that has been taken up or deposited on the fruit or vegetable is a possibility. Low doses of lead is know to result in anemia, nervous system damage, headaches, constipation and fatigue. When lead enters the human body it travels in the bloodstream and may deposit in tissues and, more likely, in bone. It does not readily degrade (the chemical’s half life is 25 years), and so it stays in the body for an extensive period of time (Health Canada 2007). Lead is especially dangerous for small children and babies as it can effect mental development.

Lead was once used in paints and in gasoline. In Canada and the United States, lead paints are no longer used because of the serious health risks. Dust containing traces of the paint can be inhaled, and small children sometimes eat lead paint chips do to their sweet taste. Lead paint has been banned since 1978 in the U.S. (EPA 2011). Yet, any older buildings still contain lead paint, and plots where buildings once were may have remains of lead paint chips or lead plumbing.

Prior to the early 1970s gasoline contained lead additives as a lubricant for engine valves, so car exhaust was a major source of lead particulates in the air and environment. With new engine developments in the 1970s, lead additives were no longer necessary and unleaded gasoline became more commonly used. In 1990 Canada banned leaded gasoline in the Canadian Environmental Protection Act (Health Canada 2009). In 1996 the U.S. banned leaded gasoline as a stipulation of the Clean Air Acts Amendment of 1990 (EPA 1995). Airborne lead particulates have dropped dramatically in the U.S. and Canada. Other countries, especially those using older models of cars, still use leaded gas.

Lead particulates do not just disappear over time. Some will have dispersed, but some accumulate in soils. Lead from car exhaust remains mostly contained to 100 meters from the road. Soils near high traffic areas, or older construction sites should always be checked for lead content. Rooftop farms are generally an exception to this. Most rooftop farms have new soil purchased from a farm supply store. While the soil will not have elevated lead levels from sitting in urban pollution, these new soils may still be exposed to lead and heavy metal contamination as rain drops collect lead particulates in the air and carries them into the soil. This is what the research of Professor Whitlow is examining. Interestingly, he found that there were ten times less heavy metal particulates in the air at the Brooklyn Grange, six stories above ground level, than at the busy street level of Northern Boulevard in Queens, New York (Whitlow 2012). Us rooftop farmers were breathing easy with this news.

Uncontaminated soils in an untouched environment have a naturally occurring lead concentration of 20-50 parts per million. Typical urban soils fall in the elevated range of 50-200 parts per million. The United State’s EPA has published Ecological Soil Screening Levels (Eco-SSLs), which are “concentrations of contaminants in soil that are protective of ecological receptors that commonly come into contact with and/or consume biota that live in or on soil” (EPA 2005). The EPA’s researcher collected hundreds of papers about Eco-SSLs for different conditions, such a species type, soil pH, and type of soil contamination. Papers which represented extraneous situations were dismissed (such as those where the organism was exposed to contaminants in a manner other than normal ingestion or uptake, or if the study was conducted on a known toxic area), and an average of the applicable paper’s proposed Eco-SSLs is what the EPA reported. These values exist for plants, bugs, birds, and mammals. The Eco-SSL for terrestrial plants was found to be 120 ppm for lead (EPA 2005). However, Eco-SSLs are a guideline and not a regulation. To open a community garden or urban farm there is currently no requirement that soils be tested and approved by a government or private regulatory company beforehand. 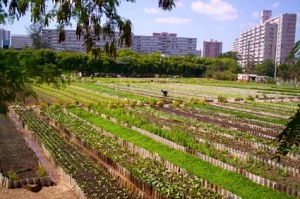 Just because a soil is contaminated with lead, or other heavy metals, it does not mean the land cannot be used for urban farming and gardening. Soil amendments can be used to decrease the bioavailability of lead. Lead is more soluble at lower, acidic pH levels. Adding phosphate to soil will raise the pH and make lead (and mercury, cadmium, nickel, copper, zinc, chromium, and manganese) less available to plants. Arsenic, molybdenum, selenium, and boron are metals which are more soluble at a high pH, so it is really important to know what metals are in soil before treating it to avoid accidently creating another potential plant contaminant (Muckel 2004). Liming is another method to raise the pH of soil. Using calcite limestone will add calcium to the soil, and dolomite limestone will add both calcium and magnesium. An organic method of liming is to use ground oyster shells (Mitchell 2012). The Brooklyn Grange uses oyster shells from swanky dinner parties on the roof to add calcium to their soil and keep pH levels elevated.

An alternate approach to dealing with lead contaminated soils is to grow produce which is less susceptible to lead uptake or deposition. Leafy vegetables and those with a long growing period are most likely to accumulate lead (Armar-Klemesu 2000). Leafy vegetables become contaminated through deposition from the air, or from rain. Washing your greens before cooking or consuming can lower the risk of ingesting lead by up to 73%. This shows that the minority of lead contamination is through uptake by the roots (Nabulo 2012).  Root vegetables may also have elevated lead concentrations, but this is do to direct contact with the soil, as opposed to the roots having absorbed the lead (Rosen 2012). According to Armar-Klemesu “Celery, parsley, leek, lettuce, spinach, carrots, beets and radishes are not advisable to cultivate on heavily polluted soils, on account of their high uptake of heavy metals and nitrate. Gourds, onions, garlic and fruit trees and shrubs offer lower risks.” As a general rule of thumb, the order of highest lead levels to lowest lead levels is leaves, roots, fruits, and seeds (Massadeh 2011).

For those involved in community gardening or urban farming, assessing the risk of lead exposure can be difficult. Many urban growing areas are within 100 meters of high traffic areas, putting them at serious risk for lead heavy soils, yet it is not common for these soils to be tested or treated accordingly. As a consumer of local, city produce this research has not deterred me from continuing to support urban agriculture. Only limited amounts of lead particulates actually accumulate within the plant, with most lead contamination being on the leaves and roots from direct exposure to lead in the air, rain, and soil. It is comforting to know that with proper testing, soil treatment, and plant planning lead should be of little concern for urban produce. However, I believe that washing local, organic produce is not stressed, and that many people believe that since it is pesticide and herbicide free it is not necessary to do so. City farmers, and especially gardeners, are not strategizing to reduce the risk of their plants taking up lead, but hopefully in the future these practices will become more widespread.