Cultivating the Next Generation of Visionary Farmers: Growing Power’s Approach to Urban Agriculture 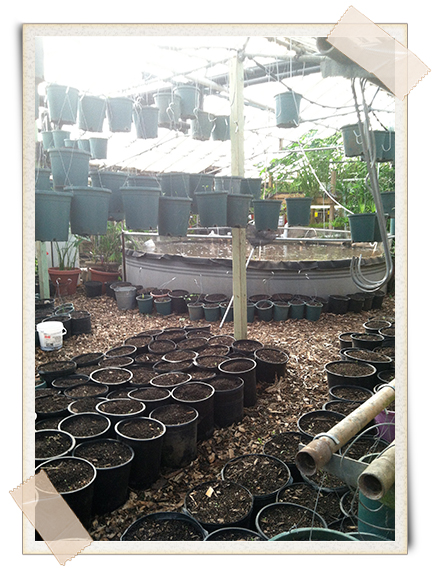 In 1993, Growing Power began as a small organization employing young people from a nearby housing development to grow food for its roadside grocery stand on the Northwest side of Milwaukee, Wisconsin. In the 1920s, the neighborhood was nicknamed “greenhouse alley” for its many agricultural operations, but eventually, the greenhouses left and like many neighborhoods, the area became what is considered a “food desert.”

Growing Power remains the last and only operating farm within Milwaukee’s city limits. In 1999, it expanded into a Community Food Center and started hosting additional educational activities. Due to its commitment to community development, social justice, and great food, Growing Power has become a key player not only in its own neighborhood and the City of Milwaukee, but in the major questions of development and resilience our world faces today.

Will Allen, Growing Power’s founder, has risen to the level of visionary in the new ecological, environmental justice, health, and urban farming movements. Recognized by TIME Magazine, The New York Times Magazine, and YES! Magazine (to name just a few), this MacArthur Fellow still does the most important work—sowing the seeds—at the farm when he is not meeting with Michelle Obama or hosting the bi-annual Growing Power Farm Conference of more than 3,000 attendees.

Growing Power has developed six “Areas of Expertise” under which it categorizes its work:

One of the best ways to wrap your mind around Growing Power’s wide variety of initiatives is to take one of the tours offered at 1:00 pm daily at the farm’s headquarters. When I arrived on a late Fall Wednesday in 2012, about 15 people had showed up to learn more about the place. Some were Milwaukeeans who had never before made it over to the premises; some were proud locals showing off a gem of the city to guests from out of town; some were students on a field trip from Mount Mary, a local women’s college; and some were just curious.

After everyone in the group introduced themselves and described why they had decided to attend, our tour guide directed us to the farm’s microgreens production. An emphasis on microgreens increases the farm’s productivity through intensive growing in a limited space. Pea sprouts, zesty sprouts, and other sprout varieties are grown in 10-gallon buckets—over 12,000 of them—that sit on indoor beds of woodchips and hang from the beams of the greenhouse ceiling. Greenhouses are a necessary and rare source of warmth during Wisconsin winters and can be found in many farms in the area, but Growing Power notably uses the very structure of the greenhouse as a design suited for productivity. 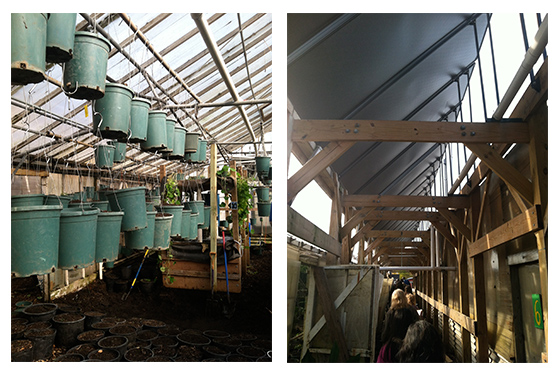 Vertical is the name of the game at Growing Power in many ways. A capital campaign is already well underway to build a five-story vertical greenhouse and learning center on the original property. This new center will serve as a processing facility, conference area, classroom space, and allow more year-round indoor growing. Sporting a sloped roof for not only thermal solar panels, but increased greenhouse space and rainwater collection, the building’s design will enable it to collect much of the energy it needs to function. The new building will also expand Growing Power’s market store and create much-needed community meeting space.

With all its national and international recognition, Growing Power does maintain strong community partnerships in its home city. Each week, over 400,000 pounds of food waste are collected from area restaurants, coffee shops, cafeterias, and the City of Milwaukee to turn into compost. As a Growing Power brochure says, “The simple truth is…it all starts with the soil.” The farm is well known for its vermicompost (you can buy their worm castings in a bag at the store) and is developing an innovative large-scale method to compost meat scraps using layers of worms and wire screen. By the time the worms wriggle through the screen, the compost on the other side is ready to be used.

After an explanation of the compost and taste test of the microgreens, our guide explained to us Growing Power’s use of aquaponics, a form of cyclical agriculture where fish and plants are grown together. Milwaukee sits on Lake Michigan and has a rich aquatic legacy tied to its local culture. Two of the fish most often found at the city’s many Friday night fish frys are perch and tilapia. Perch are no longer legal to commercially 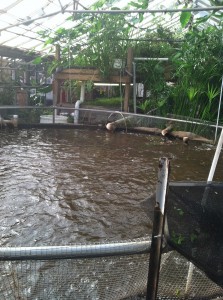 fish in Wisconsin, as the number of Yellow Perch in Lake Michigan has decreased 80% in the last twenty years. Tilapia are also popular, but they are native to Africa and prefer warmer water temperatures. Both perch and tilapia are raised at Growing Power’s headquarters more efficiently and sustainably then their non-aquaponics counterparts. Some of the farm’s tilapia even eat duckweed, a plentiful and complimentary plant that grows easily in aquaponics.

In some of the systems, papyrus, nasturiums, and water cress act as natural filtration devices. Pea gravel and sand filters are also used in systems created in partnership with scientists from University of Wisconsin-Milwaukee’s School of Fresh Water Science. On a given day at Growing Power, you may run into university professors and students perfecting the pump flows and pH levels in the fish house systems. Solar panels on top of the fish houses are used to heat the water. Vertical space is again noteworthy here, where mycoscaping logs (growing shiitakes and six varieties of oyster mushrooms) hang over the fish tanks to use that little bit of space between the surface of the water and the roof of the greenhouse. Every bit of greenhouse or outdoor space represents an opportunity to grow more food.

Growing Power’s greenhouses are inspiring. Banana, sugar cane, papaya, and fig specimens can be found in some of the greenhouses at their Milwaukee headquarters, but the organization’s greenhouse spaces are found throughout the area. The owner of Forest Home Cemetery on the city’s South Side called up the farm a while ago to offer use of the cemetery’s greenhouses. In the past, many cemeteries used greenhouses to grow their own ornamentals, but since these flowers have been outsourced, many of these spaces have sat unused. Growing Power has reclaimed this space for growing and has started a new farmers’ market on nearby Mitchell Street.

Our tour revealed more and more partnerships and initiatives that Growing Power has had a hand in. After and hour and a half, we returned to the entrance with an opportunity to buy produce from the market store and sign up to volunteer. Growing Power utilizes more than 3,000 volunteers each year as well as many other additional visitors and stakeholders.

Outside of our state, Wisconsin is often associated with old television shows or the Packers, and Milwaukee is famous for its breweries. Milwaukee is a city that remains one of the most racially segregated in the country, a sometimes forgotten place that in the eyes of many is just a little-sister city of Chicago. In recent years, though, when locals are elsewhere in the country and say that they’re from Milwaukee, people increasingly respond, “Oh, I know about Will Allen. Have you been to Growing Power?”

Growing Power provides a refreshing revisualization of the importance of Milwaukee and the Upper Midwest. Growing Power and others have facilitated Milwaukee’s transformation into an incubator of ways to solve our environmental/social challenges with community-specific creativity. Milwaukee’s assets as a former industrial epicenter are being repurposed and utilized in new ways.

True to its original form as a roadside farm stand where low-income teens could work for a wage, Growing Power focuses on our abundance of talents instead of the places where our communities have broken. No matter where you are in the world, there is vertical space—you just have to find a way outside and look up.

To take a tour of, train with, or volunteer for Growing Power in Milwaukee or Chicago, visit their website for details.