Durian: The King of Fruits—Penang, Malaysia 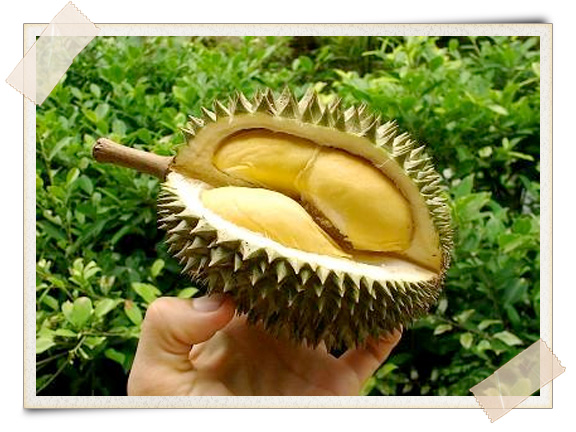 I had heard stories about the fruit that stinks like gym shorts and rotten onions; the large thorny fruit that foreigners traveling throughout South-East Asia loathe; the fruit banned in many public facilities like buses, trains, and hotels. If there is a fruit that deserves not only the folklore, but also the name “King of Fruits”, it is indeed the Durian. Durian belongs to the family Malvaceae, a rather large family containing such diverse plants as okra and hibiscus. Durian is a tropical tree, native to Brunei, Malaysia, Indonesia, and potentially the Philippines. It is open-pollinated, which means the fruit can vary greatly in appearance and taste. The flowers are most often pollinated by either birds or bats and sometimes even large bees.

This unique fruit has gained widespread fame for its distinctive characteristics–a highly flavorful taste, large size, thorn covered husk, and of course, a distinguishing odor, although some enjoy the scent and regard it as highly fragrant. Even with its questionable taste and odor, the fruit is extremely popular and can be quite lucrative for its seller, as the fruit can fetch prices ranging from eight to twenty American dollars. In some places, there are rumors of even higher prices for the more rare varieties.

Many believe that the best Durians can be found in a small island off the western coast of Peninsular Malaysia called Panang. It was there that I met Joseph Teoh, one of the only organic Durian farmers in the region. He has created a beautiful nine-acre farm, which has an abundance of herbs and fruits.  He drove me out to his farm and for a day we walked and discussed the various properties of the infamous Durian fruit. Joseph believes the Durian is useful for its widespread medicinal value, which is demonstrated by the myriad of species that make use of it (snakes, dogs, scorpions and even elephants). Teoh says, “When you watch animals that seldom eat fruit consume Durian, you know there is good reason for it”. For one, it is high in sugar, Vitamin C, potassium and the amino acid tryptophan (called nature’s sleep aid). Durian is also a good source of carbohydrates, proteins, and fats, hailed by raw food eaters around the world. The leaves and roots can be used as an antipyretic, and the seed can be consumed in addition to the fruit itself. For these reasons, Joseph, his wife, helpers, and dogs eat primarily Durian during its harvesting season, supplementing the fruit with only a little rice here and there. 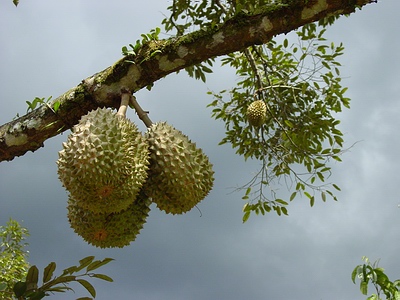 There are two types of roots, both of which play an integral part in the Durians survival. First, the “base roots” run deep and strong to hold the tree up; Durians can grow up to 150 feet high. The other root system is made up of “feeder roots”. These roots are small red roots that run along the surface, resembling veins. They extend outward to as far as the canopy on a healthy tree. The survival and abundance of these feeder roots are crucial to the existence of the Durian tree. Being surface feeders, they uptake the nutrients for the development of fruit, which is an important role since the Durian has a high nutrient need. These feeder roots are very sensitive to compaction and the existence of other plants which can compete with them for nutrient uptake.  For this reason, the understory around the Durian trees needs to be vacant of all competing vegetation due to the Durian’s unique root system.

In order to reduce competition, chemical applications of herbicides are commonly used in Durian orchards. They kill the competing weeds, but also affect the plant in many negative ways. First, an abundance of herbicide and pesticide use can harden the ground and limit the absorption of water into the soil. For example, if it is a hot day and too many feeder roots are shocked by the contact of cold water, it can inhibit growth and even damage the tree.  Since the feeder roots are so sensitive to temperature the most beneficial way for the Durian to receive water is by infiltration and absorption into the soil surrounding the tree. When the ground is hard the water is not absorbed and much of it is lost to evaporation.  In order for flowers to form, the ground needs to remain relatively dry, so at first minimal water is needed. To avoid the trees becoming waterlogged, one can spread ash on the soil surface around the trees. Once the flowers have been pollinated and the stems are about an inch long, more substantial amounts of water are needed.

The chemicals also degrade the nutrients that the Durian absorbs, limiting the overall  nutrient content  of the fruit. Since the Durian is a surface feeder, the chemicals can be absorbed by the feeder roots and have a substantial impact on the plant. Although animals can be used as a more natural technique for weed reduction, when cultivating the Durian plant, the use of animals is not recommended since the feeder roots are easily compacted. Therefore, Joseph uses weed eaters and pulls out weeds throughout his orchard.

In Durian production there is no need for insecticides, because of the fruit’s hard, thorny shell it is rarely affected by small pests. Its only real pest is the Flying Lemur, which in a single night can damage approximately twenty Durians. Often traveling in groups of around twenty, the damage they do can be quite catastrophic. Joseph has an innovative solution for the Lemurs, which is a great example of Integrated Pest Management. There is a species of red ant he calls “angry ants”. Instead of eradicating these ants from his farm, he promotes them. They harvest the sap from the hard shell, leaving the Durian dryer but creamier, as well as collect and place aphids on the hard shell of the fruit. They collect excrement from the aphids and for this reason protect both the aphids and the fruit. Flying Lemurs know not to tamper with the angry ants, for obvious reasons, and the fruit on Joseph’s farm is consequently left alone.

An additional pest to be considered when growing Durians is the wild boar. The wild boar eats the fruit when it drops. In Thailand, the largest exporter of Durian, they pick the fruit before it drops, which helps extend the shelf life and improve shipping durability. Joseph, however, does not pick the fruit because he claims that all fruit create many saps that protect it from animals and the sap is only apparent before the fruit ripens. Once the fruit ripens, the sap is gone and is ready to be consumed by animals and humans. Otherwise, the sap can cause harm to humans consuming the Durian fruit. So, Joseph waits for nature to dictate when the fruit is ready; and as it falls, it is quickly harvested, as Joseph tries hard to get to the fruit before the wild boar do.

To create a nutritious and flavorful product, Joseph applies fertilizer to the ground surrounding the trees around four times a year. He uses worm cast, cow manure, composted food waste, and ash. He has a total of ten bins for creating his worm cast. He places cow manure in these bins and the worms work throughout the bins aggregating around 2.2 kg  of finished product per bin each day. This means, Joseph produces a total of 22kg of finished worm cast per day! He also collects the runoff from watering the bins to use as a compost tea. The compost tea is highly rich in nitrogen and he applies this mixture to the soil under the trees. He warns against using chicken dung or introducing any type of bacterial microorganism, as the trees need fungal rather than bacterial microorganisms. Both fungal and bacterial organisms can be found in forest and prairie ecosystems, but grasslands have a higher content of bacterial microorganism; whereas, forest ecosystems are abundant with fungal activity.  Bacterial microorganisms are thus introduced for vegetables and leafy plants where trees work best when fungal microorganisms are introduced.  One way to tell if the tree is healthy is the appearance of orange colored fungus around the bark. If the tree is pale, it needs to be given more nitrogen and water. Another way to assess the health of the tree is to look at the sheen of the leaves and the placement of the limbs. The feeder roots help dictate, and the limbs follow the feeder roots, shading them for optimum nutrient absorption. If the tree is growing better on one side, then fertilizer and ash are necessary to amend the opposing side. This way, the grower can promote even distribution of nutrients and limbs for optimal fruit development.

In spite of all this information about the Durian, readers may still be left with one question: why is Durian called the “King of Fruits”? Of the seasonal fruits, the Durian is usually the first to drop, which then precipitates the dropping of the mangosteen, or the “Queen of Fruits”, as well as mangoes and others. It is also considered one of the most nutritious and desired fruits in the world. Its place at the beginning of the season combined with its medicinal properties make the Durian the rightful owner of its regal title. Joseph makes sure to cultivate all other varieties of fruits far enough from the Durian as a way of maintaining respect for “the King”. Growing organic Durian is rare, but it can fetch a greater price for the farmer and provide a more nutritious product to its consumers. I believe once you consume a Durian, you will then understand its title, as it is completely unique in the world of fruit.

Joseph tries to teach his neighbors and fellow farmers these techniques, however, few listen. In order to make a living, Joseph believes in growing fruits and herbs because they require substantially less labor than vegetables. “Vegetables are high cost and labor intensive. Durian, you plant right and take care for five years then you will have good product for the next 100 years, requiring minimal maintenance. So why not work five years and harvest your whole life?”