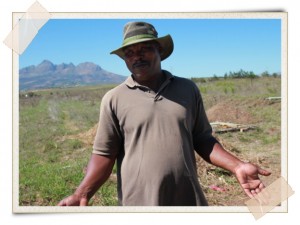 “I want to be able to sleep at night. I want to know that the food I’m selling people is going to help their health, not make them sick.”

These are the words of Eric Swarts, an emerging farmer, who grows organic vegetables on a 10-hectare farm in the Cape Winelands region of South Africa. Prior, Eric worked on a number of the large-scale, commercial farms that attribute to a large percentage of South Africa’s agricultural economy. Years working in a chemically intensive, high-input growing environment left Eric disillusioned with conventional agriculture and guided him towards organic growing. Historically, challenges with land acquisition, financial insecurity, lack of expertise and access to markets have restricted young black farmers from entering the organic sector but in 1999, Eric joined an independently sponsored initiative aimed at introducing emerging farmers to organic agriculture. Opportunities like this set an optimistic tone for the future of South African agriculture, the global food system and the environment at large.

We are currently in the midst of two global crisis’, hunger and climate change. These two are inextricably linked; our rapidly deteriorating global environment is and will continue to present challenges to food production. With the FAO recently stating that global food production must increase by 70% by 2050 to meet the demands of the growing population and avert a future food crisis, it’s clear that as our ability to produce food becomes compromised by our changing climate, we need to put an end to the status quo.

High-input, intensive commercial agriculture systems are notorious for their destruction of ecosystems, biodiversity and abundant misuse of natural resources. With this in mind, governments globally are recognizing that in order to meet increased food production levels, while working with the consideration of climate change threats, we must actively build and support sustainable, climate conscious, smallholder agricultural systems.

In Africa, smallholder farmers are the majority food producers – they are responsible for growing about 80% of food products generated on the continent. Their input to the global food supply is crucial, and thus, investment in and support of these farmers is absolutely vital.

South Africa, one of the more financially stable countries of the continent has a dual agricultural economy, of both well-developed commercial farming and subsistence production. South Africa covers 1.2 million square kilometres of the continent, making it roughly one eighth the size of the U.S and hosts seven climatic regions, from Mediterranean, to subtropical and semi-desert. 12% of land can be used for agricultural production, yet, due to limited water availability, only 22% of that 12% is high potential arable land.

In recent years the South African agricultural sector has faced a number of challenges. Increasing centralization, unstable weather and unpredictable food prices have led to a gradual decline in agricultural employment. A low number of new entrants into the industry has resulted in a largely ageing population of farmers – which does little to secure the strength of smallholder farmers.

In 2011, the South African government made public its intentions to support and grow sustainable, climate conscious agriculture. They have, alongside a number of private stakeholders, enterprises and NGOs, developed a number of programs to support climate-friendly agricultural systems that will provide crucial ecosystem services and help mitigate climate change and aid in alleviating hunger and poverty. 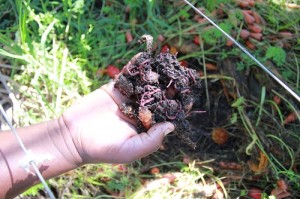 It was an early program, Go Organic at Spier that supported Eric in changing his role from farm hand in the high-input, mono-crop, commercial agriculture sector to farm manager of his own organic, vegetable farm in Stellenbosch, South Africa.

Prior to joining the Spier program, Eric had extensive experience with farming. He grew up on the farm that his father managed and upon finishing school, he pursued a diploma in agriculture, which led to employment on various commercial food farms in the Western Cape.

In 1999, at the height of Eric’s disillusion with the commercial agriculture industry, Spier (a Stellenbosch based business with an emphasis on sustainability and triple bottom line reporting) and the Sustainability Institute joined forces to launch the program, Go Organic at Spier, that supported young, emerging farmers from ‘historically disadvantaged communities’ on a 14-month training program in organic food farming. Eric took this as his moment to exit the commercial food sector and joined the program in an attempt to gain knowledge and experience in a supportive environment.

At the end of the Go Organic project, four out of five of the other trainee farmers decided to return to the commercial agriculture sphere finding organic too financially precarious, labour intensive and unstable when working with the area’s dry, phosphate rich soil and arid climate.

However, the program only intensified Eric’s enthusiasm for organic farming. In 2002, he seized the opportunity to continue farming on 10 hectares of Spier’s privately leased land through a sponsored land-reform initiative. The land-reform initiative recognized that it was easier for small, emerging farmers to lease or rent land rather than purchase it. Owing to this, Eric was given the opportunity to try his hand at organic farming without suffering set-up costs for land purchase or the management difficulties of loan repayment, he was also supported by Spier through subsidized water and infrastructure costs. 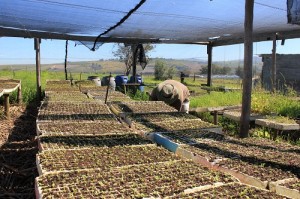 His first growing season was a difficult one as he learned that it’s not always feasible to directly apply large-scale methods to a small-scale project. He poured all of his available funds into the farm – and found a supportive customer base for his certified organic produce with Dew Crisp, wholesalers to South Africa’s most prominent supermarkets and a few smaller restaurants and retailers.

After a few tough growing seasons, Eric found there was still a lot to learn about overcoming the challenges of organic farming and if he wasn’t going to turn back to chemicals, he had to seek out knowledge and techniques from seasoned organic growers. In 2004, Spier and The Sustainability Institute facilitated a skill-exchange trip to India, where Eric visited and worked with a number of small-scale organic farms in the southern farming region. The experience offered an opportunity to view the challenges of organic farming in a new context and learn the true meaning of ‘working with what you have available’ – a philosophy, or farming ethos that he has since integrated into all aspects of his farm. 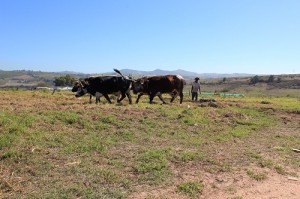 Eric continues to utilize a number of the practices he picked up from Indian farmers, a favorite and most efficient practice is the art of mixing cow dung and urine with molasses to create a liquid manure for the soil. He places measured amounts of dung, urine, water and molasses in containers, where it is left to ferment for 10 – 14 days. The resulting liquid is then applied to crops once a week. The soil on Eric’s farm has been a continuous obstacle in achieving a profitable yield, “ten years ago, when we started, it was just white sand.” The soil is very high in phosphates and so other popular procedures, like utilizing chicken manure, are of little help, the wealth of micro-organisms in the Indian cow dung and molasses mix aid in boosting the soil nutrition. It’s techniques like these, that work within nature’s boundaries, that have helped Eric to coax his land back to health and vitality.

Labour is another challenge facing the productivity of Eric’s farm, “you can have everything needed for the land, but if you can’t afford labour you can’t do anything.” During the summer season Eric employs four casual workers and uses his six Nguni oxen for seedbed preparation and ploughing the fields.

His seed is sourced partly from his own plants and partly from commercial seed retailers (the seed is washed prior to sowing) – “the big companies are not interested in selling organic seed and if they do, it’s 3 to 5 times the price of their standard. Availability of organic seed is also hugely limited in terms of variety and not all varieties work in our soil.”

As part of his involvement with The Green Road, (a local initiative that ensures continued production of good quality natural and organic food by committed farmers who are both joint owners of the supply chain and committed consumers) Eric has been involved in a new volunteer-led certification process – the Participatory Guarantee System of organic certification/guarantee for small growers/farmers. The PGS system requires that consumers and producers participate in the guarantee process of each farm – offering emerging farmers an alternative to costly organic certification.

Through a new supportive sales partnership, Eric’s farm now supplies one of Cape Town’s most prestigious hotels, The Mount Nelson, with his produce and contributes weekly to a Cape Town based community supported agriculture scheme, Harvest of Hope.

Eric’s perseverance and consequent success act as a great force of inspiration for organic farming and emerging farmers in South Africa. We need to arouse greater opportunity and support for small-scale, climate conscious food growers globally. Increased financial support, market access, the facilitation of knowledge exchange and infrastructural subsidies are crucial. There is no longer anytime to dodge the question of feeding the world’s growing population nor how we can protect our planet’s dwindling natural resources and biodiversity. The time is now and the answers do not lie in the continued dominion of international food corporations whom exercise depletive growing methods and export the majority of their goods, it lies within the proliferation of story’s like Eric’s.