Farming and the Yin Yang Theory at the Health Club Farm, Thailand 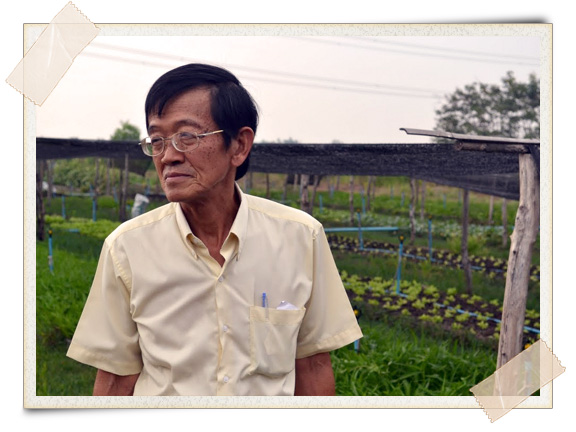 Pairod got his degree in engineering around thirty years ago. Ten years later he was diagnosed with Hepatitis B and became ill. The doctors wanted to treat his disorder with western medicine, but he refused. Pairod had been studying macrobiotics and believed he could find his own remedy by changing his diet. According to Pairod, the industrialization of agriculture has resulted in a loss of essential minerals and vitamins through a process by which, not only the soil is stripped of its nutrition, but also the vegetables and the consumer. Market demand has selected crops based more on appearance and yield than for nutrition. Pairod created a special diet for himself using only local organic foods and to this day he has had no issues with his Hepatitis B. Since then, he has been actively helping people overcome health problems including diabetes, cancer, high blood pressure, high cholesterol, and many more. He believes that the key lies within a nutritious, highly specialized diet mixed with ample rest, exercise, and meditation.

Pairod’s healing practice is founded on rejuvenating the blood stream. Once you can revitalize your blood, your body can take care of the disease on its own. Vitamin supplements are only needed because much of our food lacks the vitamin and minerals that it once provided. The normal or healthy pH of human blood should be between 7.2-7.4. Disease tends to drop or raise your pH, limiting its ability to treat the disease on its own. While common Western medicine treats the specific problem, Eastern medicinal philosophy tends to target the origin or cause of the problem. For instance, he believes tumors are good and that they are created by the body to hold the disease from spreading through the blood to the rest of the body. So Pairod doesn’t focus on the tumor, instead he rebuilds the body’s strength and balances the blood’s pH. 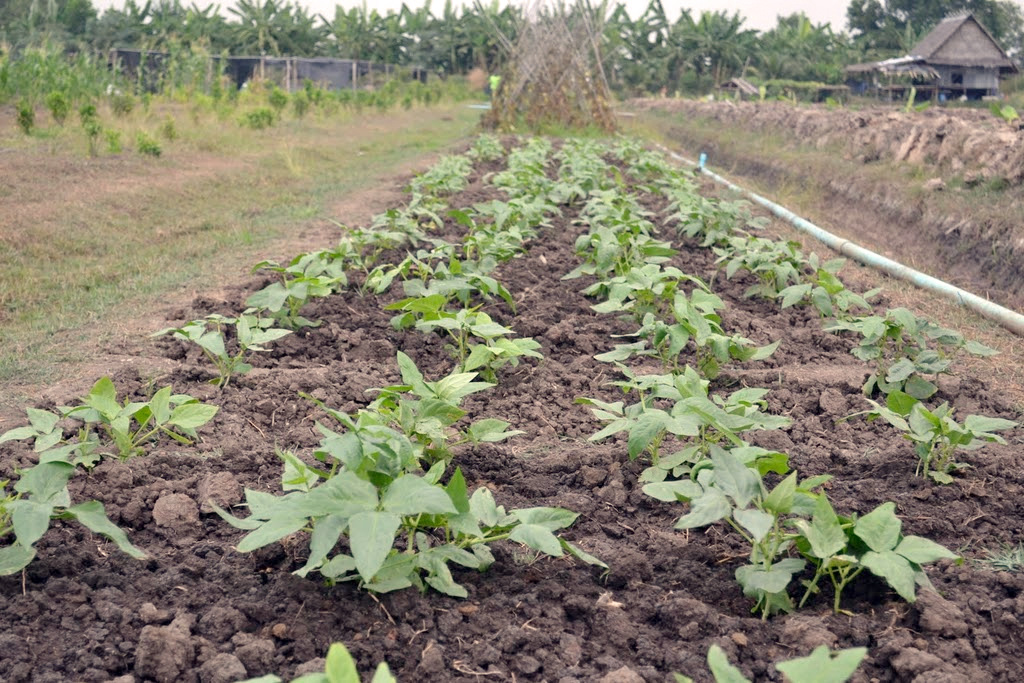 The Ying yang theory can be applied to many things, but never have I heard it being used in the context of farming and nutrition. Here at Pairod’s farm, in Pong-Argard, part of the Chachoaengsao Province of Thailand, I listened to him explain how deep the concepts of Ying and Yang ran through his farming and nutrition practices. The Yin yang theory is all about balancing, and as any ecologist knows, unconstrained nature also has a way of maintaining balance. He explains, “Yang is the force from outside going in and Yin is the force from the inside going out. Together they create balance, and when someone is sick they are out of balance, either requiring a Yin or a Yang position.” In Pairod’s opinion, the appropriate food will provide this balance. “We eat to be healthy, otherwise why would you eat?” 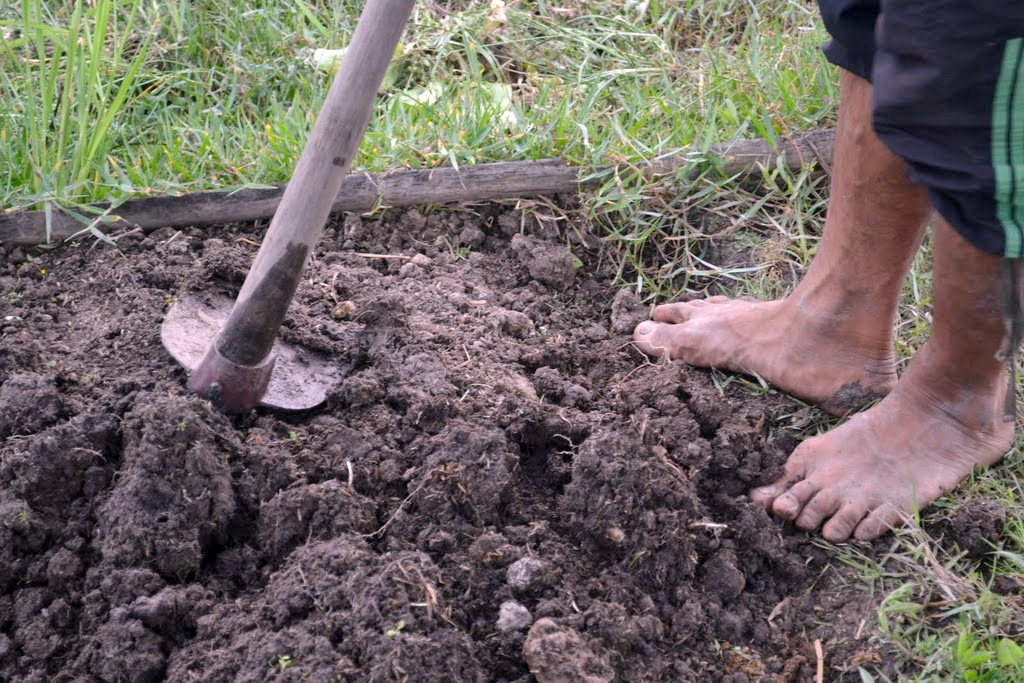 There are four main principles to Pairod’s farm. The first is the emphasis on quality and not quantity. “We are preparing raw material for healthy food.”  He has sent his vegetables to labs to test for mineral and vitamin content. All the tests have come back confirming high amounts of each, indicating that his produce is extremely nutritious. The second principle is that food should be sourced locally. Pairod says because we are Thai, we should eat Thai foods.  Seasonal diets are our bodies’ way of synchronizing with nature. The third principle is that long life vegetables are healthier.  Quick growing annuals that you replant every season are less nutritious for you than perennials. He says the longer a plant takes to produce an edible product, the healthier it is. A few examples of long life plants that Pairod uses are Ivy Gourd, Hummingbird tree, and Cassod tree. The Ivy Gourd has many extensive medicinal qualities. The extract from the roots and leaves can be used in diabetes treatment. Ivy Gourd can also be used in treating skin eruptions, gonorrhea, and as a laxative. It is believed that, due to the presence of glucose-6-phosphate, the plant can support a healthy body and regulatory system. The Hummingbird tree can be used to treat dysentery, epilepsy, bronchitis, fever, smallpox, sore throat, stomatitis, and much more. These are just a few examples of the numerous long-term medicinal plants Pairod grows at the Health Farm. Finally, the last principle is that food must be fresh. Food loses its vitality after harvesting.  “The longer we wait to consume the crop the less we benefit from its digestion,” claims Pairod. These are the principles that guide The Health Farm and the diets he creates. 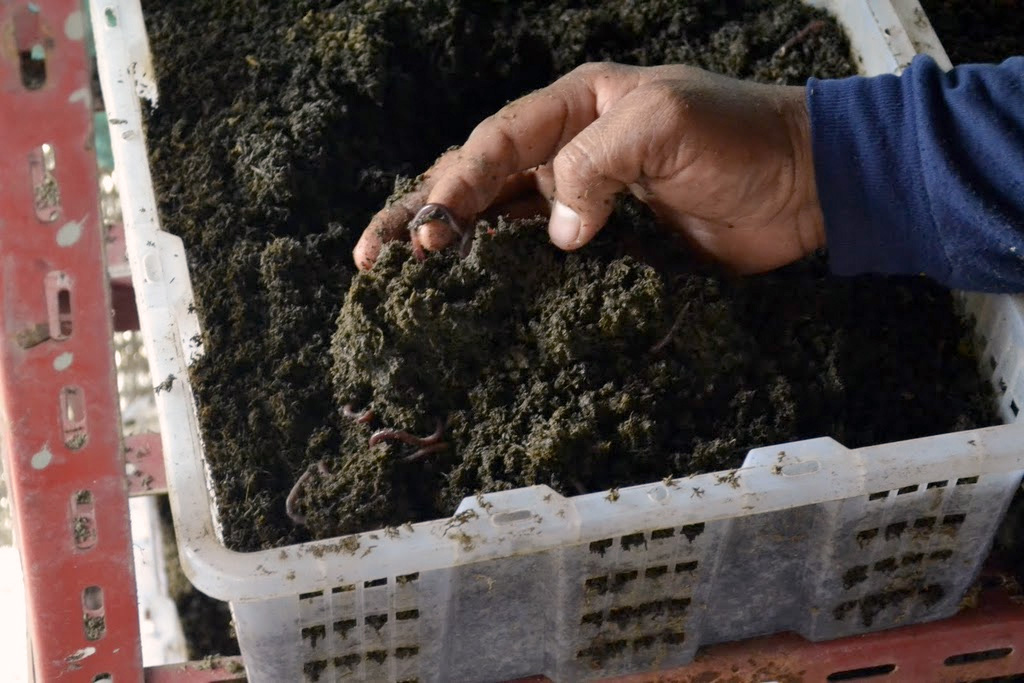 In order to restore soils vitality and pH, Pairod uses EM, earthworms, and waste water. These three replace his need for any type of conventional fertilizers. When he first started farming the land he also harvested soil from the forest to mix in with the existing sub-par soil. Pairod says, “Soil becomes strong after three years and that is when my vegetables became strong.” The earthworms play a major role in the restoration and “strengthening” of his soil. He has erected three buildings dedicated strictly to the harvesting of these essential farm workers. In each building is a concrete slab that houses three long, even piles of organic fertilizer. Pairod deems the fertilizer and its creators so vital that he has erected a small electric fence on the inside of his buildings, surrounding the piles to protect from predators. Pairod builds the soil base from food waste and manure and waters once a week. The food waste is kept in bins until the unpleasant smell goes away. Then it is mixed with the cow and buffalo manure. He releases the earthworms to reproduce and plough through the product leaving one ton of a finished and finely aggregated substance after only one month. These creatures can be found throughout his soil, and as Pairod says, “Evidence of the earthworm in your soil is the true test for being organic”.
To protect from insects, Pairod uses a few techniques.  He plants some plants with strong scents that deter insects throughout his farm such as Marigold, Yellow Cosmos, and the Globe Amaranth. Also, Pairod makes a concentrated solution from boiling down such plants as Basil, Lemon Balm, Thai Basil, Lemon Basil, Lemongrass, and Thai Galangal. This solution is mixed with water and then sprayed on the plants. It is all natural and does no harm to the product. It naturally repels insects from targeting his produce.

It is innovative techniques like this that make small farmers unique.  Chemical companies are quick to promote the newest form of pesticides, and the vast majority of Thai farmers rush to the stores to purchase them. But here, Pairod believes that nature provides all necessary cures and remedies. He studies his farm and believes in harmony. He even reported that some plants he sowed for the sole purpose of attracting and feeding the pests. This process is widely used and believed to deter the pests from more profitable crops. He respects the pest’s purpose and their role in the Ying Yang farming system he has created.

Pairod has created two large ponds to house his fish. He raises 5 different types of fish, Big-Head Carp, Catfish, Seven Striped Barb, Silver Pomfret, and the Common Snakehead. These fish are just one of the many sources of healthy protein for his patients. In fact, Pairod tells me he grows 40 different types of protein, with 15 types of rice and has even discovered a vegetable source for the much needed vitamin B-12 that exists almost exclusively within meat. Incorporating aquaculture into small farming systems is extremely common throughout Southeast Asia, with catfish being the most prevalent. These are value added products that survive with minimal input. Creating water ponds are necessary when farming in the tropics where the dry season is so drastic and severe. It is the only way to insure ample water throughout the year. The King of Thailand has devoted his life to promoting sustainability and advocating self-sufficiency. In 1991, the King began widely promoting the use of Vetiver grass to protect soil erosion and to preserve water. His teachings have inspired farmers throughout Thailand to practice more ecological farming techniques. Due to the Vetiver’s deep and thick root system, the plant can hold a massive amount of moisture in the soil. At the Health farm, Vetiver grass plays a significant role in improving water holding capacity and has been planted between most of the beds. 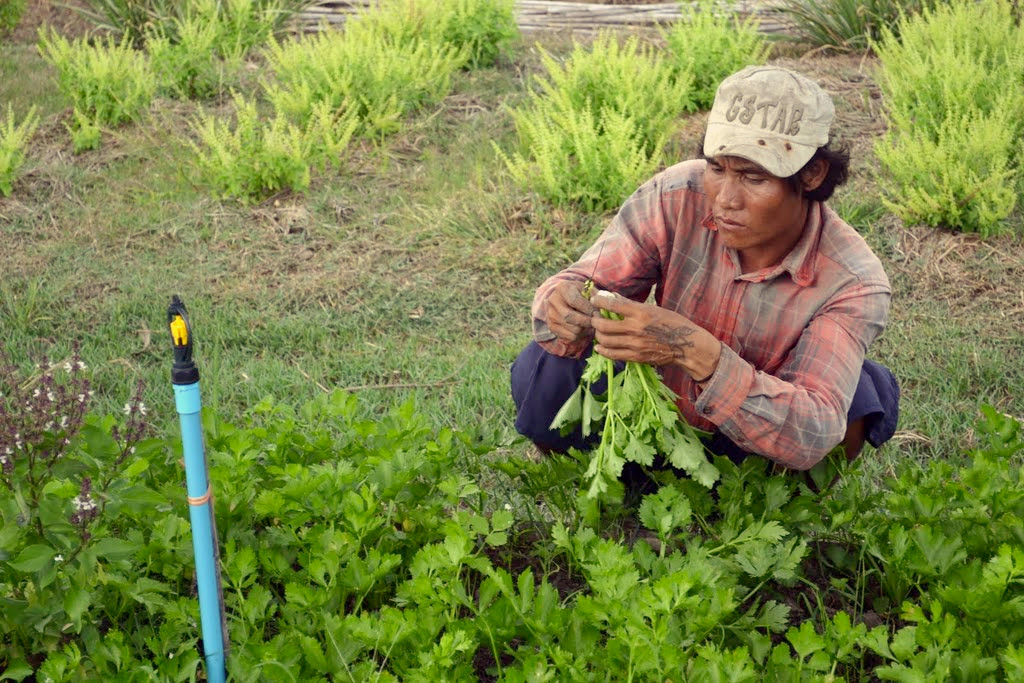 Here at the Health farm, Pairod grows superior products. Pairod is an intelligent farmer and a well-respected man. He farms because it is what he believes in and everyday he receives confirmation for his success. He has established his market by creating and promoting his healthy food and the diets he designs and he claims his produce is a value-added product. He has no need for conventional fertilizers, pesticides, or herbicides. The key to his success lies within a balanced and richly diverse ecosystem that works with nature rather than against it. Every afternoon, the train is loaded with nutritious, organic produce and shipped two hours away to Bangkok city proper where it is cooked and served to those in need. His patients believe in Pairod and his produce. They were referred by friends to Pairod and quickly abandoned all attempts to treat themselves with conventional practices.  Now, they believe in not only Pairod’s medicine, but his philosophies as well. He hopes to promote his techniques and remedies in the future, but believes many would be quick to disregard his teachings.  Still, his patients are forever grateful and have continued to send their friends and family to see him, which is good enough for Pairod. He is currently working on writing a book to promote the cultivation of healthy and nutritious food to target disease.