Farming… in the City? 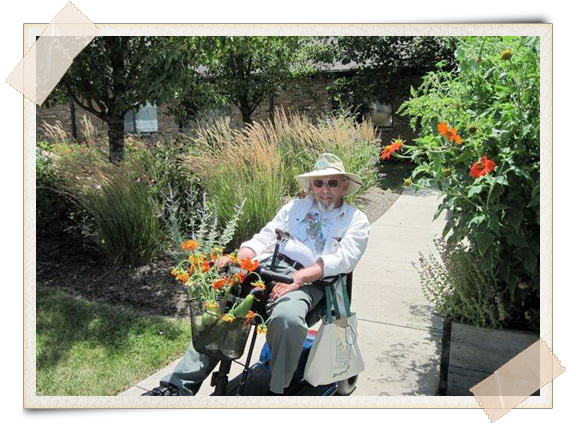 Dr. Lou Laux currently lives in Springfield, Ohio at a retirement community called Oakland Village. He is a retired Biology professor from Wittenberg University, where he taught for 32 years until he retired in 1991.  Prior to Wittenberg, he taught at the University of Michigan, and at the Young Harris College in Georgia.  He has been an avid gardener and bird watcher throughout his life.  His fascination with fauna and flora led to his PhD studies in Zoology where he completed ecological bird studies. Everywhere he has gone he has always found the time to garden with his wife of 54 years Ann Laux. They have always enjoyed producing their own vegetables, particularly heirloom varieties. In many of their homes they have constructed solar powered greenhouses to extend the growing season. Even today, at the tender age of 81, Dr. Lou Laux continues to grow and educate using several raised beds that he built at his retirement community. His peers have all been inspired by his delicious produce and have learned that it is never too late to start growing.

In 1935 there were 6.8 million farms in America, most of which were the family farm of our Hollywood imagination – a family with children, livestock, family pets, the large kitchen garden, and, of course, a crop or livestock to market. Those 6.8 million farms proved be the peak number of American farms.

Today the number of farms is significantly reduced to about 2 million farms, but the above image of “family farm” is virtually no more.  Not far from where my wife and I live is a family owned dairy farm.  When we arrived to work in the area in 1959, along with it being a traditional dairy farm, its retail ice cream outlet was also an important social gathering place. Today it is still owned by the same family, but now it is a major recreation site with a much expanded ice cream outlet (in-door and out-door seating) and gift shop, separate full-service restaurant and gift area, a goat herd displayed petting zoo style, miniature golf, and annual farm related festivals – all making for a major social gathering place for all ages.  Is there anyone who does not know where I mean – yes, Young’s Dairy.

So, how are farms in America now designated?  The American Farm Bureau Federation recognizes eight types of farms grouped into two categories.  Ten percent are corporate level farms, both family and non-family, with sales of $250,000 and up well above a half million dollars.  The remaining five farm types range from retirement/lifestyle farms to farms with sales of $249,000 and below.  The family farm of yesteryear certainly isn’t what it used to be!

Is it not time to redefine the concept of family farm?  In fact, the spirit of the family farm is redefining itself now…in cities nationwide, as well as here in Springfield and its surrounding suburbs. In Pam Corle Bennett’s column of January 6th, she gave us a taste of what it means to garden in Springfield, programs where vegetables are primary with flowers having the auxiliary role of floral enhancement.

There is the County Extension Service building surrounded by the Gateway Gardens. All manner of planted containers from pots, wading pools, straw bales to elevated beds (a very promising technology for the urbanite) of various dimensions, high and wide can be viewed, as well as a 10,000 square-foot Victory Garden.

But there is more – land surrounding corporate sites (Benjamin Steele and Gordon Foods); yards, school, church, and retirement center grounds; and even abandoned city properties (Habitat and Springfield Promise Neighborhood projects). In some cases a greenhouse is available (such as Tac Industries), or small livestock (such as the On The Rise program).  Furthermore, the planting site is not necessarily tilled.  Given the potential of 3lbs/square-foot for vegetables, is this not urban food production?  Is this not farming in the city?

But is it family farming?  Of course, the whole community becomes the family.  Virtually all of the Extension Service Gateway Garden programs are staffed by the Master Garden Volunteers (MGV), their volunteer services extending into many outlying programs – school, church, and retirement center settings; or neighborhoods surrounding vacant city lots.  The Wittenberg student requirement for community service, and faculty interest is also resulting in volunteers for community garden activities.

It is now community urban food production, not only including individual families, but all who wish to actively participate, as well as all those folks walking by or looking out windows.  Their obvious visual pleasure and comments adds to the sense of community. In the retirement center where we actively produce food in elevated beds (one of the 19 Way to Grow community gardens now in Springfield), the folks living in the surrounding apartments tell us of their pleasure watching us.  More and more, many traditional values are finding new opportunities for expression.  Urban food production is expanding upon America’s traditional values of the family farm.

How about expanding upon employment within the context of urban food production?  Is this not literally working for food, but not as a handout?  Believe us, we have experienced much pleasure listening to the expressions of joy from satisfied eaters of fresh produce from our modest retirement center urban food production.

And it gets even better. The Extension Service programs, largely successful because of the active MGV, and the corporate site program have provided several thousand pounds of fresh produce to our Second Harvest Food Bank.  The corporate site program also provides incentive points toward the health care premiums for those employees who participate.

Curiously enough, Springfield is not alone in this resurgence, but we are among the pioneering cities in urban food production.  Is it not time for Springfield to elevate the image of these programs as potentially significant, not only for food production, but for the unlimited potential for building community and ultimately for real jobs and business opportunities?  Is it not time to create the financial and regulatory incentives that allows for farming… in the city?