Gardening without Digging by Les Anwyl 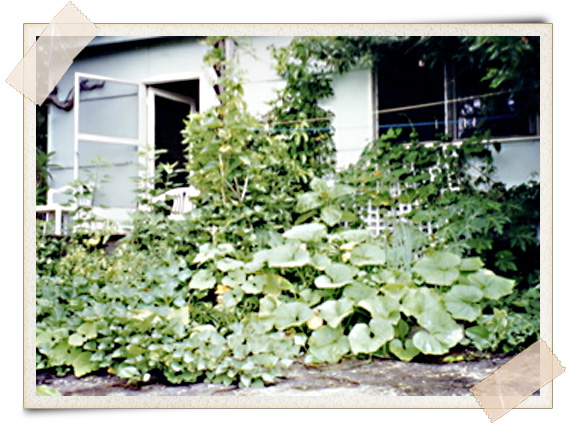 One of the easiest and most effective ways to improve and build soil fertility in any gardening situation is to use a method known as sheet mulching.  Thick layers of mulch are placed directly on the soil, simulating the thick leaf litter and humus found in natural forest systems.  Sheet mulch provides multiple benefits, including water retention, weed suppression, slow release of nutrients and increase of beneficial soil organisms.

I first was introduced to this method through a sweet old lady called Esther Deans.  She had written a book called ‘Growing without digging’, and was one of the first people in Australia to promote this type of garden.  Her simple method enabled anyone to quickly create an extremely productive garden in any soil, even directly over weeds or lawn.  The somewhat chaotic garden in illustration 1 is one of my early mulch gardens, made on shallow sandy soil over solid rock!

I later came across the method again at Bill Mollison’s Permaculture Institute.  Big areas of tough and mostly useless bladey grass (Imperata cylindrica) were just trampled, covered with cardboard and lightly mulched with straw.  Cuttings of sweet potato (Ipomoea batatas) were pushed under the cardboard, with their growing tips exposed to the light.  In the rich soils of northern New South Wales, rampant sweet potato runners soon covered the mulch, and produced enough tubers to feed an army.  Sometimes fruit or nut trees were planted at the same time. They thrived with sweet potato as a groundcover.

The materials listed below are not always available and can be expensive, so it becomes important to identify locally available material which can be substituted.  Various materials can be used, applying the same principles. Some suggestions are given, but be resourceful with what is available to you.

To make a sheet mulch garden, first knock over any tall weeds or woody plants with a brushcutter, or just trample them; don’t remove them, as they will quickly decompose under the mulch and add nutrients.  A light sprinkle of organic fertiliser or manure is applied to the ground to kick-start microbial activity.  A little lime or dolomite may be helpful if the soil is a bit acidic.  Overlapping layers of newspaper or cardboard are placed on top to create a barrier that prevents weeds from regrowing. Banana or other large leaves can be used as a weed barrier in place of paper. So can old clothes, blankets, carpet or underlay. 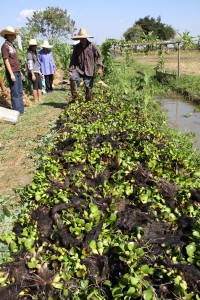 Follow the weed barrier layer with a good layer of lucerne hay [editor: also known as alfalfa – Medicago sativa], which is a rich source of nitrogen (for a deluxe version use mushroom compost as well). Then top this off with a thick layer of straw.  Part of the beauty of using straw and hay is that they are very easy to handle and quick to apply (one of Esther Deans’ goals was to encourage gardening amongst the elderly and less mobile). However, for these layers I have also used woodchips, lawn clippings, seaweed, autumn leaves, peanut shells and sugar cane waste, just to name a few.  Any weed material which doesn’t have ripe seeds or persistent tubers can be used.  Here in Chiang Mai, Thailand we have made good use of water hyacinth (Eichhornia crassipes), an abundant aquatic weed.

Of course, with different materials the results will vary.  Sometimes the straw will be full of weed seeds.  Sometimes termites will take the place of worms.  Sometimes there is not enough nitrogen.  But I can confidently say that with this method, soil fertility and structure will always benefit and water needs will be reduced.

The garden needs a really good watering to get it started, but once wet it conserves moisture.  To plant in the garden, make a hole in the mulch, down to the paper, and make a little rip in the paper so that roots can easily find the soil.  Fill the hole with a couple handfuls of good compost or soil and then plant seeds or seedlings.

Organic matter will improve the fertility, structure and water holding capacity of any soil.  Sheet mulch gardens quickly provide bulk organic matter and create an instant humus-rich layer on top of the soil. 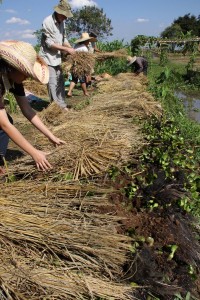 The soil is never exposed to sun or the impact of rain, so it develops excellent structure, especially in the top layer where the feeder roots are.  Even with regular watering, the top layer of soil in an unmulched garden goes through wet and dry cycles.  In sheet mulched gardens, though, the moisture, humidity and temperature at the surface remain constant.  This creates a microclimate conducive to worms and a rich variety of soil organisms, including fungi, which are very important to the nutrient cycle.  These microbes convert the straw, lucerne and paper to humus and colloids (dispersed particles), and to readily available plant foods.  They also eventually incorporate the organic matter into the soil, effectively doing your digging for you.

The important thing to get right is the appropriate mix of rough fibrous (high carbon) material to nitrogen rich material.  With not enough nitrogen, materials will take a long time to break down and will borrow nitrogen from the soil in the process.  It is a lot like a compost heap, except that you do not want it to get hot [Editor: Heat, such as generated in compost heaps, could be harmful to garden plants.  Fortunately, materials used in sheet mulched gardens are not piled to the extent that damaging heat is generated]. The other difference between sheet mulching and a compost heap is that when you have made your compost in a heap, you have to spread it around your garden.  But with this method, your compost heap is your garden!

I have been making paper and mulch gardens for more than twenty years.  I have made them in suburbia, deserts, rainforests, swamps, sandy and clay soils.  I have made them over thick lawn, weeds, even rock. The method has been successful for establishing trees, perennial gardens, groundcovers and vegetable gardens. I hope you will find it useful in your situation.

Editor: Les is from Australia and has long been involved with horticulture, especially with nurseries and tropical plants. He was a senior horticulturist at the Royal Botanic Gardens in Sydney before becoming involved with permaculture, after which he worked on many community garden projects in remote Australia. For the past year he has been involved with Fair Earth Farm in Chiang Mai and will soon be returning to Australia where he manages a property for biodiversity and wildlife habitat as well as food production. Les can be reached at [email protected].