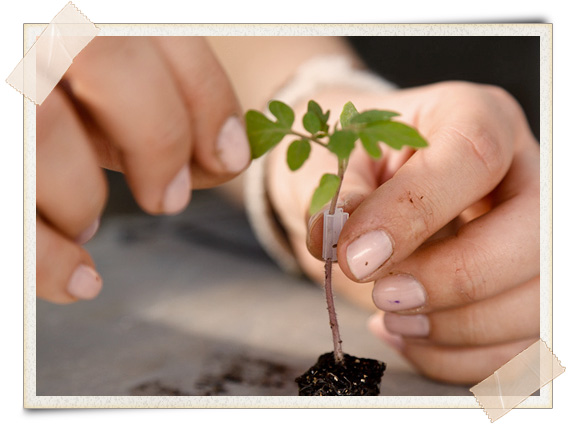 GAINESVILLE, Florida – Grafting tomatoes to control soil-borne diseases may be a cost-effective management solution in some organic production situations, according to a University of Florida study.

Graduate student Charles Barrett and horticulture professor Xin Zhao received a $10,000 Sustainable Agriculture Research and Education (SARE) Graduate Student Grant to examine the effectiveness of using rootstocks in organic production of grafted heirloom tomatoes to provide resistance or tolerance to root-knot nematodes — a prolific soil-borne pathogen of Florida’s sandy soils. In addition, the researchers were interested in assessing the growth, yield, and fruit quality of the grafted tomatoes and analyzing the costs and returns of producing and using grafted tomatoes in organic farming systems.

“Grafting is not a new technique worldwide, but its interest in the U.S. has been increasing in recent years as a potential alternative to chemicals as a disease management tool,” said Zhao. “Organic growers, especially, have limited options for controlling soil-borne diseases and root-knot nematodes. Chemicals aren’t the answer and crop rotation, which is an alternative, may not always be feasible, especially when you are dealing with small-scale production systems. That’s why we wanted to look at grafting as an option.”

The process of grafting involves fusing the foliage and fruit-producing top (scion) of a plant cultivar with the rootstock of another plant cultivar, producing a plant that carries the characteristics of both the rootstock and the scion. In the Southern SARE project, two heirloom tomato cultivars were grafted onto two tomato rootstock cultivars that show tolerance or resistance to root-knot nematodes and express a vigorous growth habit.

“The results of our study showed that both rootstocks significantly reduced root-knot nematode galling in the grafted plants as compared with the non-grafted and self-grafted scion plants,” said Barrett. “Root-knot nematodes cause root galls that damage the roots and thus result in the plant’s poor performance.”

“In the field with very high pest pressure, we saw one rootstock was even more effective than the other rootstock in decreasing root galling, but there was no clear relationship between root galling and tomato yields. Better yields with one rootstock-scion combination was observed as compared to the non-grafted plants and self-grafted plants in that field,” said Barrett. “In the field where the pest population was induced and not as high as the other field, we saw less gall development on the rootstock grafted tomatoes than the non-grafted and self-grafted plants, but there was little difference in yield.”

The researchers agree that the effects of grafting on root-knot nematode control and tomato yields deserve more in-depth research, but the take home message from the study is that when seeing root-knot nematode infestations, grafting is a method that can be used to overcome this soil-borne pest.

Barrett added that in their economic analysis, the researchers found that the economic benefit of grafting is most evident when used in highly infested fields.

“The cost of grafting can be four times more expensive than non-grafted transplants, so there is a limitation of adoption,” said Zhao. “Ultimately, the determination of weighing the cost of producing/using grafted transplants versus the expected return has to be made by the grower.”

Zhao said that additional grafting research is required, including more economic analyses; using the technique in other production systems, such as high tunnels; encouraging more breeders to get involved so more rootstocks are available for growers; performing more site-specific studies on various rootstock and scion cultivars; and exploring the nutrient management aspects of grafting. The nutrient management research is also supported by a Southern SARE Graduate Student Grant (Enhancing Nitrogen and Water Use Efficiency in Tomato Producer By Using Grafting Technique).

To learn more about the project, “Integrated Use of Grafting Technology to Improve Disease Resistance, Yield and Fruit Quality in Organic Heirloom Tomato Production,” visit the national SARE projects database and search by project number GS10-096.