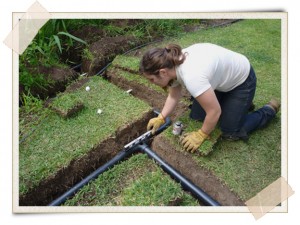 Over the past five years, droughts have caused many Americans throughout the Midwest and western United States (U.S.) to reevaluate the importance of water in their lives. This commodity and resource is taken for granted in this country. It often seems that the presence of water is either over-abundant or insufficient. Though both constitute unwelcome challenges from an agricultural perspective, a surplus of water is likely more manageable than a scarcity. A severe, or even moderate, drought probably tops the list of a farmer’s greatest fears (perhaps along with an untimely freeze) as a threat that exists out of his or her control. The amount of precipitation that falls over the course of a year is certainly beyond our control, but what we do with the water we have can compound or alleviate pressures felt by farmers, municipalities, companies, and individuals alike. As the population swells, people are clamoring for more water, when they should be asking, “how can I use less, and how can I target my consumption to more useful areas?”

It is estimated that the average American uses 40 gallons of water during the course of a day, rarely questioning its source or final destination. Much of that water is used as part of daily chores and activities, such as washing dishes, clothes, or ourselves. It comes from reservoirs, rivers, and aquifers that are part of a larger system generally intended for multiple uses. When this water gets flushed along it usually heads to a septic tank or treatment facility. Both require huge amounts of time, energy, and space to safely address a potentially toxic and hazardous by-product. The toxicity levels of these effluents often become higher when they are combined or concentrated, thus resulting in more challenging efforts to purify with less favorable results. What we can do as consumers is limit our inputs into an overburdened system by implementing individual changes. Obviously, a conscious effort to use less is something we all could benefit from, but other more progressive and aggressive measures might be in order as the situation grows more contested in the upcoming years. One approach that continues to gain acceptance is the use of grey water. 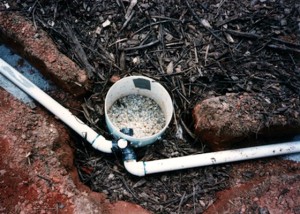 Of the 40 gallons used daily, a large percentage of that water passes on with minimal contaminants before arriving at its final destination. Certainly toilet water that is considered raw sewage, or black water, presents a public safety concern in our current system. But water from washing machines, dishwashers, sinks, and even bathtubs should be considered relatively clean and usable as long as it remains free of chemical detergents. These are the most common sources for residential grey water. To harness the potential of this “waste” one can make some basic plumbing alterations so that machines or drains discharge into a yard, landscaped area, or garden. The main idea is to tie into an outflow pipe and install a three-way valve that allows you to direct water outside for irrigation as desired (the most common appliance that people associate with grey water is the washing machine because the risk is fairly minimal and the reward substantial, with traditional top-loading machines averaging 30 gallons per cycle in the U.S.).

During the planning process, a variety of other site-specific conditions are worthy of consideration prior to installation. Topography and slope of the land can greatly affect gravity flow in a positive or negative manner. Soil type will determine absorption rates and appropriate volume. The type of plants or crops one opts to grow will also affect volume or rate of flow. Acceptable edible plants to introduce into a grey water system are the subject of much debate within the field. Those that err on the side of caution will say that grey water should only be applied to ornamental landscaping and fruit trees because of the threat of bacteria and pathogens coming into direct contact with produce. Others will say that only root crops should be avoided while everything from tomatoes and peppers to blackberries and hops are acceptable candidates. Each individual is capable of determining their threshold for risk, but systems that incorporate dishwater or bathwater should include additional filtration or bio-remediation methods in the form of planter boxes, mulch, or composting worms that break down bacteria harboring residues prior to dispersal on vegetation. Once the type and location of plants has been determined and the source and volume of water set, one can commence outlining the plan for irrigation pipe. Digging trenches and finding the proper level are the bulk of the installation. Sub-surface irrigation, by way of drip or soaker hose, is recommended to reduce saline deposits and loss due to evaporation.

An elephant in the room that has escaped mention up to this point is regulation. Before even considering a grey-water system for a home, one should check with local and state authorities for restrictions, permitting, and approval. Thorough investigation is required into plumbing and building codes, as well as state and local environmental and board of health regulations. This daunting prospect is enough to deter even the most committed enthusiasts, but the process creates engagement in community issues and encourages active participation in important dialogue. The variance is huge throughout the country. Take the case of two neighboring states where water rights in the past have caused disputes resulting in death: Colorado and Arizona. In Colorado, the attempts to recognize grey water systems as a viable alternative to current methods have been met with strong opposition due to many archaic laws and beliefs. A recent House Bill (HB 12-1003) introduced last year intended to merely distinguish the difference between black water and grey water failed to pass, leaving many hopeful supporters of practical change demoralized (including Colorado State University, considered one of the leading research institutions within the field that had built a $230,000 grey water system for a green dorm that was deemed illegal by current state law). Now consider Arizona, which has embraced the use of grey water since 2003 when it passed comprehensive legislation aimed at simplifying, streamlining, and validating the practice. They developed a three-tier system set by volume targeting different uses: residential, commercial, and municipal. The language is clear and concise and information regarding how to go about setting up a grey water system suited to your specific situation is readily available on a governmental outreach program through the Arizona Department of Environmental Quality (information available below). They have set the gold standard for grey water law in the United States (not so much the case for their immigration laws).

The fact of the matter remains that water issues throughout the country, particularly the West, forever have been, and continue to be, enormously complicated. As Wayne Aspinall, Colorado Congressman from 1949 to 1973, said, “In the West, when you touch water, you touch everything.” However, years of convoluted rationale should not obstruct pragmatic and sensible progression. Resistance to change is often the result of a failure to understand the recently exposed facts at hand. Grey water may seem like a small matter, but it represents a greater principal tied to a necessary shift in perception regarding prudent stewardship of our waterways. Though it is best applied for homeowners looking to reduce waste and produce home grown food (a noble cause in itself) it also represents something bigger. It stands as a declaration that we as citizens prefer our water to be used for important purposes, such as drinking and irrigating our crops, not moving sewage through a pipe. Greater efforts need to be made by people across the board, including hay farmers who use pivot irrigation to blast jets of water twenty feet into the air at one o’clock in the afternoon on a hundred degree day, or fruit growers that use flood irrigation in orchards as opposed to drip or micro-sprinklers. They are just as much at fault for reckless endangerment of a limited resource as the city planners and governmental officials that fail to see the benefits of safely using reclaimed water. Grey water systems, however, embody an era of more conscious thought about utilizing crucial resources in the best way possible.