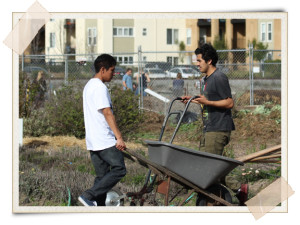 The Homeless Garden Project in Santa Cruz, California is one of the many community garden projects in the area, yet is unique in its mission and its everyday actions. This particular site is still known for its organic produce and sustainable practices, but it is the devotion to the city and its homeless populations that makes the Homeless Garden Project unique. On any given day, a mixture of students, professional workers, and homeless men and women work kneel in beds of lavender, kale, and cover crops, to produce fresh produce and to enrich not only their own lives, but the community as a whole. The Homeless Garden Project (HGP) is a certified organic community garden in Santa Cruz, California, that “provides job training, transitional employment and support services to people who are homeless”(What We Do). The mission statement of the HGP is that “In the soil of our urban farm and garden, people find the tools they need to build a home in the world”.

The HGP operates on three acres of land between the Monterey Bay and the redwood forests of Santa Cruz. The garden is open to the public every day from dawn until dusk, and visitors are welcome to walk through the gardens and sample a fresh strawberry. From Thursday through Sunday volunteers may come to work and join in the day’s activities. There they meet the staff and trainees, and share a meal with all who make the garden happen. Through community involvement, sustainable farming, and a genuine desire to help the homeless population, the HGP has established itself as a principle actor in the sustainable agriculture movement in the Central Coast, and a model cooperative for others to follow.

The HGP offers four main programs to benefit the homeless population and Santa Cruz residents at large. The Women’s Organic Flower Enterprise teaches female trainees to dry herbs and flowers and design arrangements out of them. Revenues generated from the flower projects are then channeled back into the program, and throughout the year women are trained in job skills while making valuable connections with other women. The HGP participates in Community Supported Agriculture (CSA) programs, which sell organic produce to community members at prices dependent on need, and teaches trainees important skills in marketing. The HGP is an education center, and its Cultivating Community program invites groups to attend workshops and lectures on the farm. The Connecting with Community Program links homeless trainees with local resources such as housing, food stamps, drug rehabilitation, counseling, and low-cost physical and mental health services (Programs). Throughout their programs, the HGP promotes job training, support, and re-assimilation into society.

Along with essential support and training for the local homeless population, the HGP also commits to ecological practices by employing organic and sustainable methods in their farm. This component of the project largely stems from the first director, Paul Lee. When the Citizens Committee for the Homeless created the HGP in 1990 Paul brought his experiences from the Chadwick Garden at the UCSC campus (Rabkin, Reti, and Farmer 229). Lee incorporated his learned sustainable practices into the HGP, which included French intensive, bio-intensive, and no-till practices. 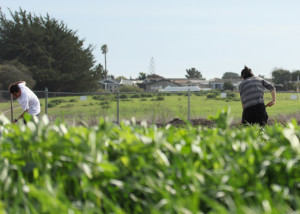 The French intensive system of gardening is a raised bed style that involves hand-working and deep cultivation (French Intensive 1). This technique is very calculated, and provides the soil with targeted drainage, air, and key nutrients at specific levels. Advocates of French intensive claim that, in tandem with cover crops, the time to develop one foot of topsoil decreases dramatically compared to traditional methods (French Intensive 2). Today, the HGP still follows these practices; beans and grasses cover the beds during the off-seasons, before they are hand-cut and incorporated back into the soil to release essential nutrients like nitrogen. The garden also has an extensive composting system, and volunteers can be seen sifting compost and gently raking it into the top portion of soil. The farm does not use machines, pesticides or herbicides of any kind (Omer). At the HGP, as in many sustainable growing operations, the earth is treated with as much care as the workers, and the product is a high yielding garden with a devoted staff.

The HGP, like most urban gardens, faces a multitude of obstacles, primarily involving land acquisition, water management, and finances (Omer). The HGP relies upon financial support in the form of donations and government grants, to help them acquire tools, water, and funding for their projects. However, their land is much less secure than their financing (Omer). Although the farm has devoted immense care and attention to developing healthy topsoil, they are on borrowed land, and may be asked to relocate at any moment (Omer).

The farm began on a lot in Santa Cruz in 1990, and expanded to include a second garden location in 1994. In 1998, the original lot was sold as city property for housing development, and the HGP consolidated at the second and current location (History). The current plot is owned by a local Santa Cruz resident, and is leased to HGP for a small monthly price (Omer). In 1998 the City of Santa Cruz devised a plan for a new location for the HGP, a 614-acre area bordering the university (History). However, the HGP has faced numerous barriers to this plan, like a source of water and adequate funding to construct the site.

Because the HGP cannot guarantee the length of time they will spend on a plot, certain projects must either be sacrificed or implemented with the knowledge that they may not be completed. For instance, the HGP could plant an orchard, but fruit trees take years to bear adequate fruit. The HGP can either invest resources to grow fruit trees with the hopes that they will be at the location in five years, or they can focus on crops like berries that will yield fruits each year. These tradeoffs are common themes of the sustainable, urban agriculture movement. However, the HGP embraces these challenges, and remains optimistic that wherever they are located, their original goals will prevail.

As is the case with many environmental movements, issues arise when we try to sort urban agricultural projects into one of two opposing categories. Nathan McClintock, a professor of Urban Planning, claims that scholars either praise urban farms for their positive contributions to food security, sustainable education, and community-building, or they question the authenticity of urban farms based on the concern that these farms focus too much on the financial aspect. (McClintock 148). However, the HGP may not fit neatly into one category, as it has largely succeeded in linking sustainability, social progress, and community involvement with marketing skills and financial gains.

In 1990, the HGP arose to combat issues of homelessness and food insecurity in Santa Cruz, and throughout the years the HGP has not wavered from its original goals. The HGP believes in “deeds, not words” (Omer), and this is reflected in their commitment to acting in the best interest of the homeless population and the sustainable agriculture movement.