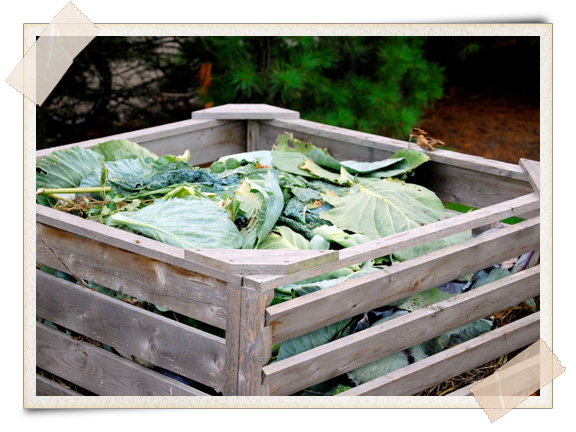 One way to understand the blend of ingredients in your compost pile is by using the C/N ratio (carbon/nitrogen ratio). Quite frankly, the chance of the average person measuring and monitoring the carbon and nitrogen quantities of her organic material is almost nil. If composting required this sort of drudgery, no one would do it.

However, by using all of the organic refuse a family produces, including humanure, urine, food refuse, weeds from the garden, and grass clippings, with some materials from the larger agricultural community such as a little straw or hay, and maybe some rotting saw- dust or some collected leaves from the municipality, one can get a good mix of carbon and nitrogen for successful thermophilic com- posting.

For microorganisms, carbon is the basic building block of life and is a source of energy, but nitrogen is also necessary for such things as proteins, genetic material and cell structure. For a balanced diet, microorganisms that digest compost need about 30 parts of carbon for every part of nitrogen they consume. If there’s too much nitrogen, the microorganisms can’t use it all and the excess is lost in the form of smelly ammonia gas. Nitrogen loss due to excess nitrogen in a compost pile (a low C/N ratio) can be over 60%. At a C/N ratio of 30 or 35 to 1, only one half of one percent of the nitrogen will be lost (see Table 3.1). That’s why you don’t want too much nitrogen in your compost — the nitrogen will be lost to the air in the form of ammonia gas, and nitrogen is too valuable for plants to allow it to escape into the atmosphere.17 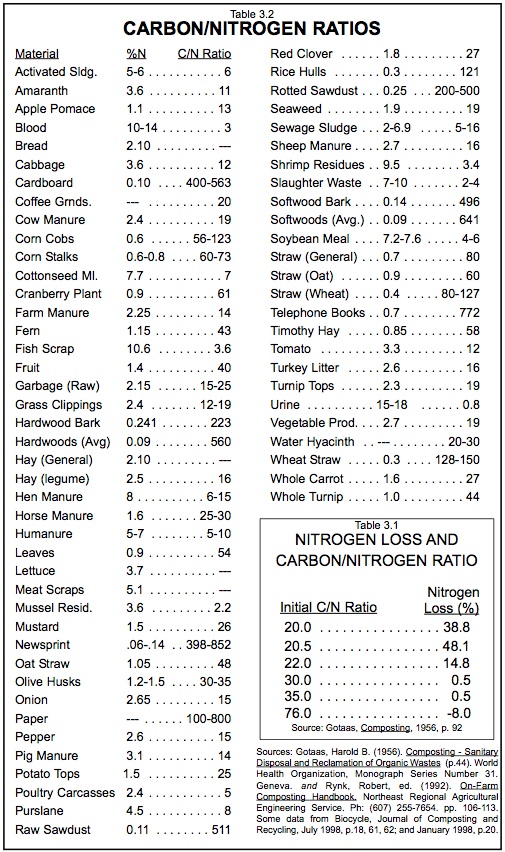 That’s also why humanure and urine alone will not compost. They contain too much nitrogen and not enough carbon, and microorganisms, like humans, gag at the thought of eating it. Since there’s nothing worse than the thought of several billion gagging microorganisms, a carbon-based material must be added to the humanure in order to make it into an appealing dinner. Plant cellu- lose is a carbon-based material, and therefore plant by-products such as hay, straw, weeds or even paper products if ground to the proper consistency, will provide the needed carbon. Kitchen food scraps are generally C/N balanced, and they can be readily added to humanure compost. Sawdust (preferably not kiln-dried) is a good carbon material for balancing the nitrogen of humanure.

Sawmill sawdust has a moisture content of 40-65%, which is good for compost.

Lumber yard sawdust, on the other hand, is kiln- dried and is biologically inert due to dehydration. Therefore, it is not as desirable in compost unless rehydrated with water (or urine) before being added to the compost pile. Also, lumber yard sawdust nowadays can often be contaminated with wood preservatives such as chromated copper arsenate (from “pressure treated lumber”). Both chromium and arsenic are human carcinogens, so it would be wise to avoid such lumber — now banned by the EPA.

Some backyard composters refer to organic materials as “browns” and “greens.” The browns (such as dried leaves) supply carbon, and the greens (such as fresh grass clippings) supply nitrogen. It’s recommended that two to three volumes of browns be mixed with one volume of greens in order to produce a mix with the correct C/N ratio for composting. However, since most backyard composters are not humanure composters, many have a pile of material sitting in their compost bin showing very little activity. What is usually missing is nitrogen as well as moisture, two critical ingredients to any compost pile. Both of these are provided by humanure when collected with urine and a carbon cover material. The humanure mix can be quite brown, but is also quite high in nitrogen. So the “brown/green” approach doesn’t really work, nor is it necessary, when composting humanure along with other household organic material. Let’s face it, humanure composters are in a class by themselves.

Part Two in a series by Joe Jenkins