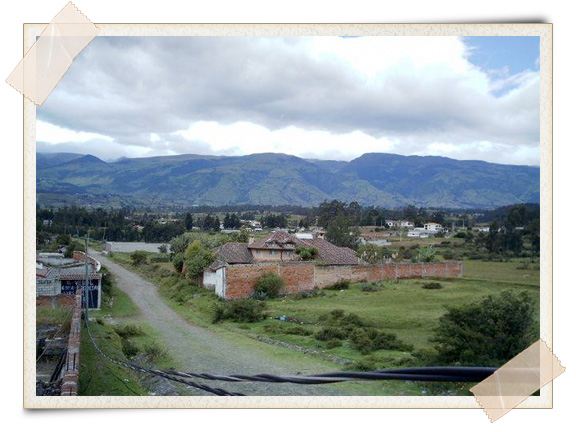 This story was submitted by Peaks Over Poverty.

Peaks Over Poverty seeks to connect rural mountain people with outdoor enthusiasts to address common interests in healthy, sustainable living and the conservation of mountain resources. We help outdoor enthusiasts deepen their experiences through education and fundraising activities. Funds support community-led development that empowers rural people to improve their well-being through environmental stewardship.

In 1976, Luis Fernando was born and raised on the slopes of Illalo in a small, red brick house. The town of La Merced, in the province of Pichincha, is a pueblo with a population of around 1500 people, nestled in a valley below the peaks of Illalo. He was the last of seven kids, five boys and two girls, who grew up in a one-room house underneath the parenthood of two indentured servants. In the last of a series of attempts at agrarian reform, laws were passed and land was released from the systematic stronghold of Ecuador’s colonial past, the Hacienda System.

When agrarian reform reached La Merced in the early eighties, Fernando’s parents were awarded a seven-hectare plot of land. Land that they previously lived and worked on for the majority of their lives. After the reform, they continued to farm livestock and subsistence crops (corn, habas-legume often substituted for beans, squash, and potatoes) now as stewards instead of servants. In the beginning years of Fernando’s youth, he assisted his parents in tending to the livestock and other labors related to growing crops. Upon reaching the early years of adulthood, Fernando and some of his brothers moved down the hill and into the charming town of La Merced where he would explore other directions for his life. However, on January 20th of 2000, Fernando’s parents made a “decision” that changed his life forever.

According to Fernando, he enjoyed a relatively normal life until a year or so before that fateful day in January. From the ages of 18-23, he apprenticed under a well-known, local painter who took his artwork to sell in Quito. The compensation for his work was nothing incredible but he got by and he was said to be quite good. He went out dancing with his friends, had drinks but never too much (a common problem in his family and many men in the area), and lived without many stresses. Then in 1999, when Fernando was in his early twenties, his sister died of what was said to be stomach cancer. Beginning this year Fernando’s spiral of life would rapidly spin downward and unravel. His father’s alcoholism became worse and as Fernando put it, “his mind went bad.” At the same time, a man from Quito approached the farmstead with a “proposal” to buy their land.

“I remember my family saying, ‘What else can we do?’ but I had a really bad feeling that something was very wrong.”

The story goes that a man from the big city got his father drunk and manipulated him into selling their land for a bargain price of 25 times less than the going rate. On the 20th of January, his father and mother signed a legal document that relinquished their ownership of the property. Fernando was enraged by the drunken decision his father had made and alone in his strong opposition and subsequent willingness to fight back. Three months later, a tractor came accompanied by armed guards and dogs. They tore up the only road leading to the top of Illalo where other members of the community lived. In an attempt to further scare his family away, they killed some of his mother’s cuyes (guinea pigs). Fernando bravely confronted the armed men by standing in front of the tractor and taking the butt of a gun to his skull.

In an effort to win back his families land, Fernando took his case to court. He found a job working his neighbor’s land for six dollars a day but the “legal fees”, including a string of corrupt lawyers and judges, were thousands of dollars beyond his means. Out of apathy and defeatism, everyone but his sister abandoned Fernando and refused to support him in the cause. The spiral of stress, depression and loneliness began to turn faster and faster.

“I remember thinking this is not really happening…thinking I am having visions…like I was trapped in a nightmare. I stopped painting because I could no longer concentrate.”

Then one night, he hit bottom with an attempt to kill himself by drinking rat poison. He doesn’t remember much of anything but he managed to stumble to where his parents were staying. He knocked on the door repeatedly and upon letting him in, he collapsed. They brought him to the emergency room where when he gained consciousness, the doctors informed him that his good physical condition protected him from never coming back. Fernando went to a psychologist and confided in his neighbor and boss about his situation. His psychologist told him he needed to continue to fight for the sake of his mental well being, and his neighbor/boss promised to support him. Fernando made it his life’s goal to win back his land and someday have peace of mind. He knew if he didn’t try that he might never find that peace. So began Fernando’s life as a farmer on the slopes of Ilalo.

Farming here is not an easy way of life by any means. It demands dangerous and very labor intensive work. Issues such as soil erosion from deforestation leading to landslides, climate change: periods of drought or overabundance of water, and disease from too much water or mono-culture agriculture (planting an area of land with only one variety of crop). In the seven months of my stay here, I have seen Fernando lose many things concerning agriculture: a significant area of grazing land to slash and burn agriculture techniques, a bull to the steep banks of the creek, two fields of his crops destroyed by hail or drought.

In 2002, Fernando’s neighbor and former employer sold his land to Steve Sherwood, who works with the non-profit Ekorural, and his partner Myriam Paredes, a Rural Sociologist. As professionals in the world of community and sustainable development, they transformed the previous vacation home into a full-functioning organic farm and CSA that employs many appropriate technologies and efforts to improve Ilalo; most importantly the harvesting of rain water, sloping agriculture land technologies, natural pest management techniques and irrigation ditches. At first, Fernando was skeptical and stubborn to some of the technologies and methods of farming. A proud man by necessity and nature, he retained farming practices that were passed down for generations from the Hacienda system: in general, practices respectful to modernization and production at the expense of environmental harmony, health and sustainability.
Over the years, Fernando has seen first-hand the benefits of working with the technologies promoted by Ekorural. As a result, he now uses irrigation ditches as well as slope agriculture land technology to avoid soil erosion on the land he continues to fight for to this day. In addition, Fernando has taken over the production and management of the CSA, furthering his skill set, access to a new market, and exposure to people from all over the world.

During our conversation, Fernando told me that even though he is fighting the land battle alone, he has paid over $20,000 in lawyer and court fees, and he works sun up to sundown to keep his mother in her house and his land at his fingertips, he has found some peace. “Aprendi a vivir asi.” (I learned to live like this).

Contributed by Kristy Lynn Allen, who is volunteering with rural farmers in La Merced, a rural mountain community an hour from Ecuador’s capital city Quito. Kristy describes the courage that kept a highland farmer afloat in his struggle to regain control over his family’s land.