African art is not based on a single tradition. It is influence by the traditions of many diverse cultures, all of which have their own way of doing things depending on their social, economic and geographic location.  Similarly, homesteads across the nation consist of different structures that serve divergent purposes, such as cooking, eating, sleeping, protecting animals at night and storing food. African people build homesteads in different shapes depending on the experience and culture of the people.

In my opinion, since its ancestral beginnings, Kenya’s art and architecture has undergone many transformations. One traditional structure still in use is the storage facility. No one knows its history, but people give credit to their forefathers for its conception.  In the remote lowlands of Kerio-Valley, Kenya, a mixed farming community of the Kalenjin tribe, a sub-tribe, known as the Tugen, still stake claim to one of the oldest granaries still in use.  It is called “The Traditional Granary,” known as “choge” in the local language.  Here are two similar granaries still owned by the community, one for food storage and seed saving; the other for sleeping. 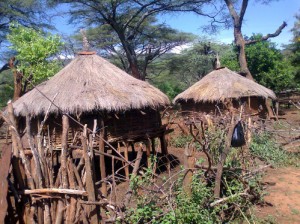 Both are raised, but are distinguished by the placement of the door. Sleeping granaries were designed by farmers who practice mixed farming and live with their animals near grazing fields.  In the granary for sleeping, the door is positioned on the bottom of the floor. This is to prevent mosquitoes entering inside for a bite at night, and the people believe this as an effective way to prevent malaria, a rampant, killer disease in the area. The sleeping granary is slightly higher to allow room for cooking and eating as inside the granary there is only bedding for sleeping. For the purpose of this essay, I will focus instead on the granary used as a storage facility.

Visiting Mrs. Linah Kobilo’s homestead, it is clear that the traditional granary still plays a vital role in food storage. At 52 years old with a family of 6, and two granaries in her homestead, Mrs. Linah Kobilo is one of the leading organic farmers in the Kapchelonge village. As she climbed inside the granary to remove some millet for flour, she revealed that, since she was young, traditional granaries have been the primary means of food storage and have the capacity to keep food for more than 5 years.  The granary is revered by Kenyan communities and considered an important structure for every homestead. According to Mrs. Linah the granary is a representation of a farmer’s strength and wealth, as it indicates that a farmer is hardworking and can provide food and security for the family.  In contrast, an empty granary signifies laziness.  The granary is also advantageous to any man who wants to marry, as a full granary demonstrates his hard work and intent to provide for his family.

A traditional granary is a round, walled shaped structure about 8ft high, raised 1 metre above the ground.  The roof is conical in shape. It is built using locally available materials such as grass, poles, rafters, mud, cow dung and ash.  Typically, the granary is located 4 metres away from the main house.  It can be scaled down and built to adapt various storage requirements, inputs and harvests.  In her 5-acre land, Mrs. Kobilo practices mixed farming; growing maize, beans, cowpeas, groundnuts, pumpkin, sorghum and millet. She has a large number of fruit trees and keeps indigenous breeds of poultry and other livestock. Maize and millet are an everyday food source, and she grinds it to produce flour for making “ugali,” a delicacy that is highly nutritious in carbohydrates and eaten with all kind of vegetables, meat, and milk.

According to Mrs. Kobilo, construction requires “a well experienced, skilled craftsman who does not require a tool box, but needs to be guided by wisdom and experience.”  However, she added that the construction relies on both genders.  The role of a man is to assemble the building materials and spearhead construction, and a woman to prepare the inside of the granary.  The man must collect materials like poles, rafters, and rope from preferred indigenous species such as Acacia Mellifera, Dichrostachys Cinerea, Bridelia Micrantha, Dalbergia Arbutifolia, Prunus Africana, and Olea Capensis.  Once he lays the foundation and completes construction, he finishes his task by thatching the roof with a special tall grass.  To prepare the inside of the granary, the woman must collect grass, prepare mud, mix it with cow dung, and ash.  This mixture is then smeared on the inside wall and floor to smooth the surface of the granary and repel pests.

Since they are so highly valued, granaries are also built to last.  Though the grasses used to thatch the roof are perishable, one needs only to add another layer when new produce is harvested and re-smear the floor and walls. The roofing and poles used are from dense specially selected trees, which cannot be destroyed by termites and other pests.  Communities have also established regulations to protect granaries.  For example, it is taboo to burn or destroy a granary.  Stealing from a small-scale farmer’s granary is also forbidden, and Mrs. Linah revealed that a known thief will face dire consequences. 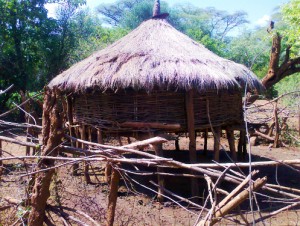 More than anything, however, granaries help the small-scale farmer survive in a climate that is not always conducive to growth. With rainfall below 900 mm annually, the area is prone to severe drought and the typical small-scale farmer will face many challenges if he does not plan well.  Without adequate storage of food and seeds, hunger is inevitable. Thus, it is crucial for each homestead to store abundant food in order to prepare for future unpredictable conditions.

According to the National Cereals and Produce Board of Kenya (NCPB), there is a deficit of 1.3 million metric tonnes of maize needed to feed the hungry in the country.  Yet, Mrs. Linah is not wary of constant reports from the media, non-governmental organizations and government, warning about the necessity of food shortage.  With her granary, Mrs. Linah has made sure that enough food is stored for her family till next harvesting season. She also saves seeds, which she hangs on the roof of the granary after a careful selection from the healthier and strongest plants. The conservation of selected seeds enhances the genetic potential of crops, saving specific varieties of millet, sorghum, pumpkin and maize favourable to harsh climatic conditions as well as being self-reliant for each planting season.

In addition, the traditional granary significantly reduces insect infestation and mildew losses for the small-scale farmer.  Mrs. Linah says, “Though the produce is placed in the floor, it is hard for the disastrous grain weevil of Sitophilus granaries to attack the grain.” Its eggs are deposited inside the grain kernels, nicknamed “Osama” by the locals. She burns neem tree for ash and sprinkles the cereals as a preventive measure.  The granary floor and wall is also smeared with mud mixed with cow dung and ash as a repellent to insects and pests. The granary is then closed for a number of days afterwards for fumigation and disinfecting purposes.

Drying of the harvests in a hot sunny day of 25-30° C helps not only to prevent insect attack, but also to reduce moisture content. . High moistures cause contamination of grains resulting in Aflatoxins that are highly damaging to the liver when consumed. The contamination can occur before or after harvests and when drying is delayed or not done adequately. A poor storage facility encourages contamination of stored grains mostly influenced by factors varying with the geographical conditions of a particular area. Without the aid of UV light, it is hard to detect the contamination, and small-scale farmer often doubt that their hard-earned produce is affected.

In order to protect her granary, Mrs.Linah has created an enclosure that serves as a protection for both the granary and her sheep. While most farmers keep their harvests inside their houses for theft reasons, she says the inclusion of the sheep can act as a remedy and a signal. One of the sheep is fitted with a bell around her neck, and if there is any commotion, Mrs. Linah will be alerted. To prevent rodents, she has tamed 3 cats that keep watch over the granary (notice the white and black cat in the picture below lying beneath the granary). She sells the cereals at the price depending on the demand, 1kg of maize fetches ksh.50, while 1kg of millet earns her ksh.80 for an income. 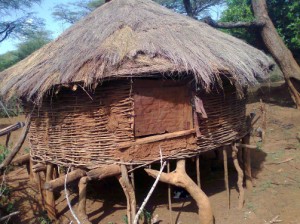 While food shortages continue to plague the country, Mrs. Linah has the answer—traditional granaries. She believes that the traditional granary can be used as a tool to fight hunger and allows farmers to save seeds.  This is particularly helpful because of the unpredictable climate conditions in Kenya today.  Mrs. Linah wants to increase small-scale farmers’ awareness of the traditional granary, as she feels that its importance should not be underestimated, because it is effective, simple, a cheap, and a way of saving food for the family, and the long term services offered by the granary storage. She advocates for the traditional granary as a solution to fighting hunger in a homestead.