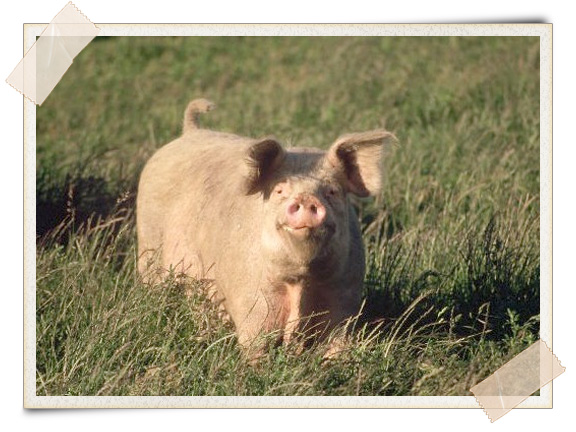 Sadly most pig farms in Vietnam are far from being integrated. Feces and urine are allowed to flow together, and this slurry is discharged into nearby black-water lagoons where at times nothing grows but a slimy scum, not even duckweed. Water from these lagoons is often used to wash and cool down pigs. Disease is rampant. Antibiotics proliferate. The stench is unbearable.

In spite of the enormous pollution that the pig farmer generates, he makes little money. The price of soy bean meal, fish meal, and rice bran (main ingredients in pig feed) has risen dramatically in recent times, while the price of pork has declined. The main cost in raising pigs is the cost of feed (up to 70%). The pig farmer in Vietnam has simply become the means by which large feed companies make money.

Pigs, like humans, have inefficient digestive systems compared to many simpler organisms. A fair percentage of the nutrients eaten by the pig remain in its feces. Of course methanogens can convert fecal nutrients into methane, but in this case, a lot of nutrients are not returned to the food chain.

What we propose here is that pig waste be processed in the same manner as human waste: that the feces of the pig be collected and processed by the combined action of BSF larvae and red worms, and that the urine of the pig be flushed to a duckweed pond. The larvae, red worms and duckweed can be processed and fed back to the pig. In the picture above, we see BSF larvae grown in the Mekong on nothing other than pig feces. Below we see the biopods in which they were cultivated.

Many pig farmers in Vietnam make rice wine, and the mash from this process is fed to pigs to offset the cost of feed. Gasifier heat can now be used in the distillation of rice wine. This eliminates the environmental and health problems associated with the burning of low-grade biomass. Gasifier heat can also be used to blanch or cook unprocessed vegetable matter such as fresh taro leaves, sweet potato vines and banana stems. 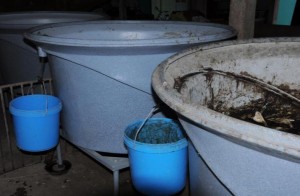 Also many pig farmers search for different types of waste to feed to their pigs. However they are reluctant to feed these wastes directly to their pigs for fear of the transmission of disease. But with gasification and fermentation technologies, the pig farmer is free to cook or ferment many types of waste. Large quantities of restaurant and institutional food waste are available, as well many types of market waste such as vegetable waste, fish and chicken offal, and so forth. Those pig farmers who operate just outside the city in proximity to large sources of waste enjoy a distinct advantage over those who do not.

After the pig farmer prepares and cooks his own feed, he does not have to dry and store it, as in the case of a feed company. He can feed the freshly cooked or fermented material immediately to his pigs. This eliminates a costly drying step and results in a substantial savings in the cost of feed.

So we see that the pig farmer in Vietnam is in an entirely different position than before:

1. By making use of BSF larvae, red worms and duckweed, the pig farmer eliminates the odor and pollution associated with pig waste.
2. In so doing he recycles a substantial portion of the nutrients in pig waste, and he feeds these nutrients back to pigs, poultry or fish.
3. He locates his farm as closely as possible to urban areas to take advantage of the large amounts of waste generated there.
4. He employs the pig as a scavenger to dispose of many different types of waste nutrients.
5. He cooks wastes with gasifier heat, or he ferments it with lactic acid bacteria.
6. With gasifier heat he also distills rice wine in a smokeless and pollution-free manner.
7. He grows taro and other fast-growing plants to feed to his pigs, and at times he blanches, cooks or ferments these plants prior to feeding.
8. He composts with a fleece most of the non-putrescent biomass that he generates.
9. He blends biochar, worm castings and compost, and he forms a co-op with other pig farmers to export high-value soil amendments.
10. Only with the sale of soil amendment products, he covers a large portion of his costs.
11. He buys virtually nothing from feed companies, and for the first time in his life, he is in a position to make money.
12. On the one site, he produces food, fuel, feed and fertilizer, as we see in the diagram below: 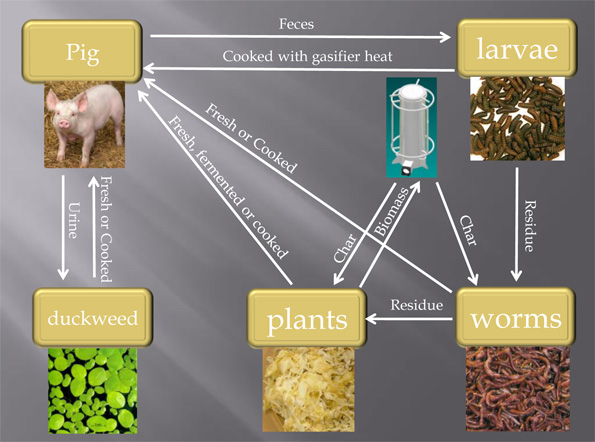 It is easy to make similar diagrams involving chickens, rabbits, goats, cows, fish and so forth. The following features fish and chickens: 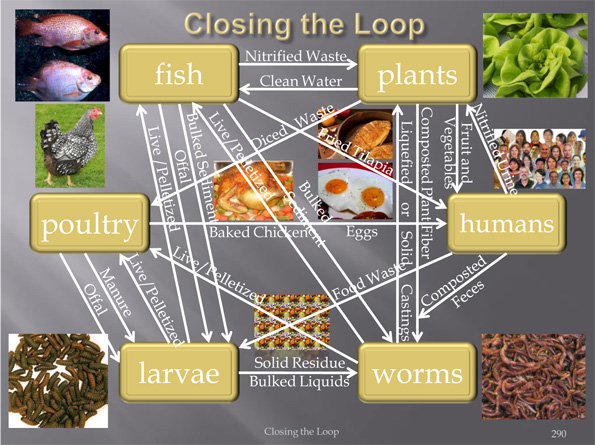