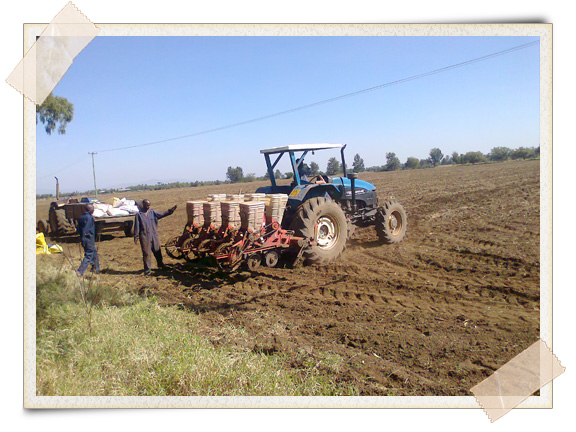 In Kenya, most farmers are skeptical of organic farming practices and their relevance to modern day agriculture. However, if these farmers only looked beyond their initial judgments, I am convinced that they would find clear evidence of its worth.  In my opinion, organic farming is the most trusted, efficient, and successful practice available to farmers today. It is the kind of farming that enables the farmer to earn a decent living while simultaneously growing on a healthy land, hence the popular saying, “healthy soils, healthier crops, and healthier people.” In Kenya, this has caused large scale farmers to rethink the importance of organic farming and incorporate it into their practices.

Chemusian Farm Ltd is located in the outskirts of Nakuru, a town 160km northwest of Nairobi in the Heart of Great Rift Valley.  Here, agriculture is the main source of income, and the town has earned the name “The Farmers Capital of Kenya.”  Both small scale and large scale farming is practiced in this region, though Chemusian Farm is a large scale mixed farm operation.

As a large scale, mixed farm, crops like corn and wheat, and pasture establishment are cultivated while dairy animals are also being reared. Typically, large scale mixed farms also are an indication therefore; that, the farm spends lots of money in purchasing farm inputs, majorly synthetic fertilizers during planting season.  Previously at Chemusian, with over 500 dairy cows raised using an under zero-grazing system, the animals were fed with nutrient dense fodders and other required supplements available as trace elements.  The feed is then partially absorbed by the cows, and the materials that are unabsorbed will be, mostly partially absorbed. The unabsorbed are excreted in the form of urine or manure. Everyday huge volumes of feed wastes and cow dung are being harvested and dumped. 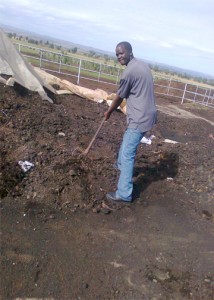 In the past few years, however, Chemusian Farm has changed its system, as fertilizers are no longer being purchased from stores. Now, manure is being collected and composted, and sometimes the cow waste is transported and spread on farmland as a fertilizers to be ploughed down later. In order to boost soil fertility, in 2009, the farm’s management initiated an organic fertilizer production project, which requires that farmer’s compost using locally available materials, (i.e., feed waste and cow dung). Composting is done by placing materials in layers, and each layer is then sprinkled with an “EM” (Effective Microbes) solution at a ratio of 1litre of EM to 100 litres of water. Ash is also sprinkled on each layer in small quantities. Finally, a polythene sheet is placed on each layer, allowing a metabolic reaction to take place.  After three weeks, the compost is ready to be harvested, sieved, packed and stored for later use.

Yet the questions still remains—why use organic fertilizers? I asked the farm supervisor in charge of planting this question, and he responded by discussing all of the immense changes that have taken place at Chemusian Farm.  Since first initiating the compost fertilizer production project, the production of corn has improved and is expected to double this year. “A feat that has not been in accomplished in years prior”.

The farm supervisor attributes this increase in production to the use of organic manures and believes that an organic fertilizer has rejuvenated the soil fertility.  This has resulted in an increase in yields, directly supporting the notion that low production can be caused by a lack of fertility in soils and not merely by drought.  (Drought is a concern in the region as Nakuru has a dry sub-humid equatorial climate.  In addition, due to its location on the floor of Rift Valley, Nakuru is engulfed with whirlwinds of dust, the name literally meaning “place of wind” (MCN 1999)). Furthermore, the supervisor informed me that, nowadays, the management asks not only about how much milk is being produced, but also about the amount of cow waste being collected and prepared for compost use.

Given that Nakuru gets an average rainfall of about 950mm, my hypothesis is that crop failure and poor yields are directly caused by poor soil fertility rather than drought.  As a result, I’ve been wondering if operant-condition principles- a form of behaviorism based on the premise that when reinforcing or rewarding a behavior occurs with greater frequency. It operates on the environment and is maintained by its consequences to continue occurring. If it can be applied to our soils here in Nakuru by rewarding/ reinforcing the soils with manures to boost productivity following a good produce. 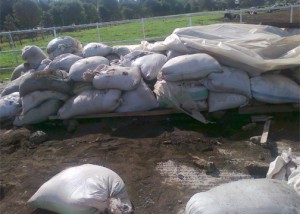 As it is a planting season, the farmer need not purchase synthetic fertilizers or wait for the costly, unreliable government-subsidy programs on chemical fertilizers.  Farmers need to realize that they have their own readily available organic fertilizers—that is: With the rising cost of chemical fertilizers and the depletion of soil fertility due to soil tillage over a long period of time, more and more farmers are turning to organic fertilizers.  Additionally, high chemical usage has increased the acidity of soils and the destruction of beneficial micro-organisms in the soils. Besides composting, other integrated organic practices are also being utilized, such as planting of beans to act as green manures and to fix nitrogen in some plots.