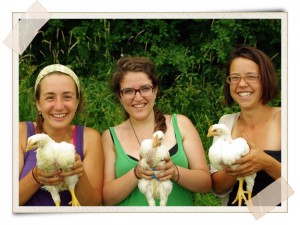 Forty kilometers west of downtown Montréal lies the quiet town of Sainte-Anne-de-Bellevue, home to the Macdonald Campus of McGill University. Here, students have taken a farming initiative, and on one and a quarter acre, the McGill, Macdonald Student-Run Ecological Gardens (MSEG) operates a small, yet invaluable, vegetable production system. The student-run gardens have several objectives (see the box below), but first and foremost they are concerned with providing the opportunity for students to learn about and enjoy ecological agriculture. The MSEG program is intimately linked with other student projects by supplying vegetables and labor support to ecologically minded university groups. The students working with MSEG come from many paths of life. Some students are native Quebeçois with a background in agriculture. Others come from the city of Montréal with no farming experience at all. A few come from the United States or the wider international community. What they all share in common, however, is a passion for understanding and implementing sustainability in agriculture, and getting dirty. 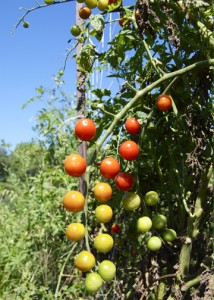 The McGill, Macdonald Student-Run Ecological Gardens currently produces over 100 vegetable varieties including many common favorites such as Roma tomatoes, Black Beauty eggplants, Hungarian Hot Wax peppers, and Bright Lights chard. More unique varieties include the Hakurei turnip, Green Zebra and Wapsipinicon tomatoes (slightly fuzzy, yellow tomatoes), and several Asian green hybrids. Although they are not seeking organic certification, the farm uses organic practices, and is always open to new, innovative ecological agriculture techniques. Last year they had a small flock of chickens and a human-powered, mobile, chicken tractor! The chicken tractor was a bottomless chicken coop that could be easily moved around a field to prevent the over-fertilization of one area. Also, the farm is available for students to perform lab trials or take samples for research projects.

The vegetables produced by the students are sold through several different outlets including MSEG’s community-supported-agriculture (CSA) shares, the McGill University Farmers’ Market, the Sainte-Anne-de-Bellevue Farmers’ Market, a market table at Macdonald Campus, and the student-run Out of the Garden Project, an on campus cafe that serves high quality, homemade, and local, out of the garden, meals to students at Macdonald Campus. MSEG also donates surplus vegetables to the student group Happy Belly, a club that collects near expiration food from local grocery stores and prepares a free vegetarian or vegan meal, which is open to the entire school community on a weekly basis and normally feeds around 60 people. The student-run gardens also collaborate with a group called Farm to School. The Farm to School program works with a local elementary school, and uses visits to MSEG as an instrument in integrating farming and agriculture into the school science curriculum. This year the students in the Farm to School program are in the first and second grade, and they will be learning about plants and insects in the gardens. 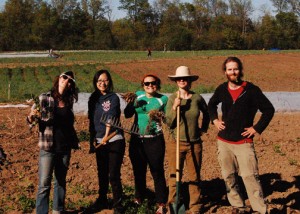 The student-run gardens operate their horticultural production on two separate fields. The first field is located in the Macdonald Campus Horticultural Centre and is only a quarter acre. This is the flagship farm space for MSEG. In Senneville, one sleepy town over, McGill owns agricultural land surrounded by the 245 hectare Morgan Arboretum, a forest reserve. In MSEG’s second season, McGill began loaning one acre of this farm land to the student-run gardens, and for several years a few acres have been rented to Les Jardins Carya, a private, vegetable production organization. The fields of these two farming groups touch, and MSEG and Les Jardins Carya often work together to achieve a common goal. In exchange for mentoring, advice, and the occasional loaned tool from the more established Les Jardins Carya, MSEG sends over a representative once a week to offer a few hours of free farm labor. This idea of cooperation and learning from each other is central to the ecological ideology of the student-run gardens. 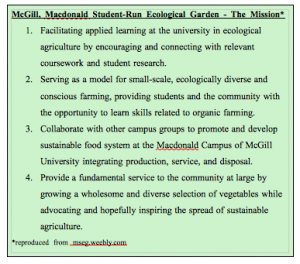 The McGill, Macdonald Student-Run Ecological Gardens have practiced ecological agriculture since its founding. This year the students implemented a farming system known as biointensive agriculture. While getting started with this new method, they are following the model of a successful biointensive farm, Les Jardins de la Grelinette, a 1.5 acre farm located in Sainte-Armand, Québec. The owner, Jean-Martin Fortier, has published a guidebook for biointensive agriculture titled Le Jardinier-Maraîche. MSEG chose to structure their own biointensive system after Fortier’s because the two farms have much in common. Both gardens are of similar size and are located in the same climate. Their production goals are the same as well: producing high quality vegetables in a small amount of space in an efficient and sustainable way. But perhaps the convincing reason MSEG chose to model their farm after Les Jardins de la Grelinette is because Jean-Martin Fortier is himself a McGill graduate.

Biointensive agriculture is a generic term for high density, organic productions, but it is important to note that there are some brand name methods that use biointensive agriculture. Most research on the subject will lead you to the well known GROW BIOINTENSIVE® by Ecology Action, a farming system that outlines highly specific methods, steps, and rules. It is easy to confuse this popular brand with the general ideology of biointensive farming. The student-run ecological gardens are practicing biointensive agriculture, but their system is not yet established enough to fulfill all of the requirements of the trademarked systems, nor are all the requirements applicable to their type of farm. For example, the student-run ecological gardens do not need to aim for the highest calorie density, while GROW BIOINTENSIVE® encourages small scale farmers to consider calorie planting.

Biointensive agriculture is an organic production system that requires careful planning. It aims to maximize yields in small spaces by protecting soil fertility and structure in the long term, and by having an optimal rotation and companion planting plan. Biointensive agriculture usually employs raised beds. This year MSEG has a small tractor for the first time. The BCS walk-behind tractor allowed them to construct permanent raised beds. Raised beds reduce soil compaction in planted areas (no person or machine is ever allowed on the bed!), encouraging better soil drainage and more soil accessibility for deep rooting plants. In the cold climate of Montréal raised beds have another advantage: the soil warms faster in the spring.

In addition to raised beds, the student-run ecological gardens hope to gain funding for caterpillar tunnels to extend the growing season for cold sensitive plants. Caterpillar tunnels are constructed from a series of pipe arches pounded into the ground with a clear plastic sheet secured around them. It is a low cost alternative to using a high tunnel or hoop house. An added advantage of using caterpillar tunnels is that the same pipes can be covered with floating row cover or shade cloth when necessitated. For MSEG, the caterpillar tunnels would be especially important for growing the Solanaceae family, which includes tomatoes and peppers. Tomatoes are one of the farm’s most profitable crops, and in Montréal their growing season is cut especially short. Although MSEG has not yet been able to get caterpillar tunnels, they do have smaller, flexible hoops set up for floating-row cover.

Without large machinery, the student-run gardens have tried multiple seeders. Last year MSEG used the Planet Junior Seeder, which is a single row seeder. This year they upgraded to the Glaser Seeder, a single row seeder that has a clear hopper to keep seeds from spilling, three seed hole sizes, and a rear roller to press down the seeds. However, MSEG has still found that the three seed hole sizes do not accommodate the range of seed sizes they use. In addition to the Glaser, they bought a six-row seeder for the first time. The six row seeder allows the students to plant dense crops with more ease. For example, MSEG uses their six row seeder to plant mesclun greens which are tightly grown and harvested looseleaf. Yet, the sad reality is that most hand seeders are fussy and work optimally only when the plant beds are smooth. After the implementation of raised beds, the soil surface at the student-run gardens is more uniform, making seeding an easier task.

One of the most important aspects of their biointensive farming operation is the addition of compost. The student-run gardens apply compost to the raised beds as part of plant bed preparation before seeding. The compost has a number of benefits for the farm. Applying the compost to the raised beds helps build up the amount of plant accessible soil. Compost is also a source of soil organic matter. Keeping adequate levels of soil organic matter encourages proper soil aeration and pore size, good soil aggregation (meaning the soil clumps just the way it should), and water retention. Compost is also a source of nitrogen, a major plant macronutrient. The student-run ecological gardens are not producing their own compost, but hope to create composting facilities in the future. For MSEG, having the capability to produce compost would mean completing their nutrient cycle and reducing expenses.

Like so many other student farming and gardening initiatives, the McGill, Macdonald Student Gardens are hoping to help others understand that ecological agriculture is imperative in a world where soil and ecological degradation is widespread. By providing the opportunity for other students to purchase, eat, and grow vegetables that are produced sustainably, locally, and with a variety of ecological practices, they are helping a greater community get back in touch with food production.