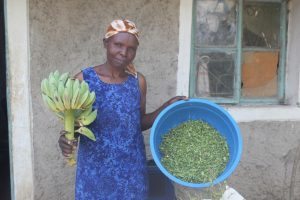 Aoko grew up in a large family, the fifth of 12 children, not far from the port city of Kisumu, Kenya. As a child, she loved helping her mother with farmwork. As an adult, she has applied much of the knowledge and many of the techniques she learned in her childhood on her own farm. She relies on one technique, the medicinal uses of moringa, daily; Aoko uses milled moringa to cure sick livestock. She saw the moringa successfully treat a wide array of diseases that afflicted her animals, which made her wonder if the plant would have similar health benefits for people. After some experimentation, she created a recipe for banana-moringa porridge, known locally as uji.

Aoko’s recipe is simple to follow: First she harvests the moringa leaves and peels odhigo bananas, both of which she dries in the shade. Once dry, Aoko mills these ingredients to create a flour-like consistency. Finally, she mixes the milled ingredients with millet flour to make the uji. (Millet is the flour traditionally used to make uji. Sorghum and maize flour can also be used.) The end result: a porridge that tastes great and has improved the health of her ailing community members. (Aoko decided to add bananas because they have traditionally been used to heal stomach ulcers. They also impart great flavor.)

Aoko’s innovation has helped improve health, nutrition, and food security in her community. She’s seen the greatest improvements in health in the children who have eaten her medicinal uji. “I feel elated when parents who have used my banana-moringa uji confess that their children were better off in health,” she said. Now, many community members have started making Aoko’s medicinal ugi. She hopes her recipe continues to spread and helps many more people heal and improve their health.