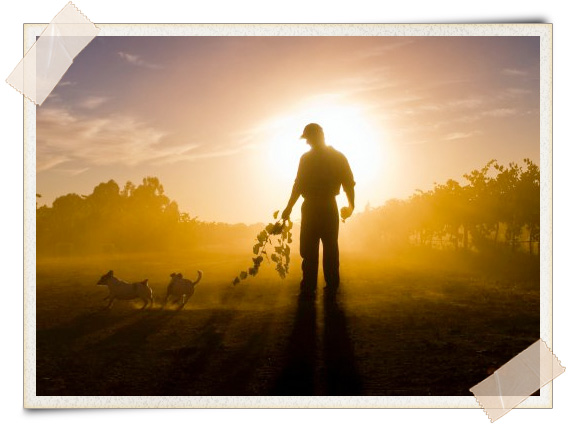 Feeling a little overwhelmed? Is the needle on the stress-o-meter topped out?  Need one more thing to do in August?

It’s been a busy season up until now, and yet there is still the second half of the season to finish up before work slows down. Mid season blues are common this time of year- here are some thoughts on the subject.

It may be hard to think of January right now, but that’s where the farmer’s story usually starts. Having rested from the previous growing season, seed catalogs appear in the mail and thoughts of Spring instill hope that this year will be a banner year. Excitement centers on new varieties to trial, and new ideas, systems or tools to test out. Optimism prevails on every front. Lots of new things to experiment with. Spring is a fresh beginning.

Seeds are ordered, greenhouses fired up, plants started. Fields dry out and crops are planted in the ground.  Warm weather and the long days of Spring coincide perfectly to get the myriad of farm tasks accomplished. With some good weather, the farm is off and running.

But around July and August here in Vermont, the reality of earlier optimistic planning finds most farmers without enough time, juggling a few too many balls at once. The chaos level rises, and a ball or two get dropped. The farm moves at full bore- planted acreage is at the max. To boot, multiple plantings of succession crops (like greens) require preparing beds, planting, cultivation, harvesting and tilling in of crops all within a week’s time frame. And these different succession crops stand next to long-season crops that have another one to three months in the ground. Besides being fully planted with crops, fields may be overridden with of a bonus crop of weeds. Knowing that the end of the season is closer than it once was, desire for weed free fields wanes. Focus changes to getting crops out of the ground and sold- and putting money in the bank. Weedy fields contribute to the overall chaos that mid summer can bring. Projects that were planned for this year fall hopelessly to the bottom of the To-Do list. Farm stress can be at an all time high.

In the fall, fields begin empty out, cover crops sown, and the hectic-ness of farm management lessens. There is still no shortage of farm work to do, for crops need to be harvested, packed and marketed. But the end of the season is in sight.  Once everything is harvested and fields are put to bed for the winter, farmers can finally EXHALE, as their slower winter season begins.

For those of you readers that are familiar with my writings, you know that I keep a farm crop journal. This journal details inputs and yields on crops I grow so I can figure out how profitable they are. But another aspect of the crop journal is to record events and the pulse of farm life during the course of the year, much like the familiar daily diary. I may write,” Four frosts in late May” or for last year, “ Rained for 8 weeks solid.” I review these notes in January before I plan for the next season, to refresh my memory which tends be habitually short. By January, it seems my mind has been reformatted by winter’s amnesiatic effect and I forget how hectic the preceding season was (just a few months earlier!) or what things went drastically wrong. It took me a couple of decades to realize this pattern, hence the diary entries in the crop journal as a reminder. One year, I thumbed through the previous season’s crop journal, and there was a page that had big letters in magic marker scrawled across it saying,” OMG! Never do THIS again!” I paused, and wondered where it came from. It kind of looks like my handwriting…

Obviously, I need help remembering, and I need help to change habits so I don’t find myself in the exact same frustrated and chaotic situation during the next growing season.  Because plans that are made in January manifest themselves mid season, now is the time to think about plans for next season. It seems counterintuitive at first, but now is when you clearly see the need for changes. You are surrounded by your work. Although the slower pace of winter makes it a good time to plan, it is easy to forget the feeling of mid season.

Ask yourself, is everything the way you want it to be on your farm? Do you want to be in this situation next year at this time?  If so, great. You can duplicate your current strategy for next year. But if you see the need for changes, then now is the perfect time to take 10 minutes and write them down. It need not be detailed or lengthy, just a rough sketch of what would be different next year. Put it in a place with other papers to review next winter, like your seed order file, or tax documents. It may be as simple as: “reduce escarole by half, no summer spinach (but maybe more in fall), step up mechanical weed control, need to reduce overall workload in May (fall fertilize? buy in transplants?), weeds and deer out of control, need more help in June.”

Another way to plan for future changes is by listing all the crops you now grow and commenting next to each crop, such as “more” “less” “OK” or naming varieties that work better than others.  Keep it short and simple.

Change is hard. The path of least resistance is doing what is familiar and what you have done for years. But if you recognize that something is amiss now, and you want to make positive changes, action needs to be taken to make those changes real. What will change? Who will make the changes? When will the changes take place? Besides being hard, change can be scary- but remember, you can always change back the following year to the way things are now. That’s not a lot of downside for the prospect of some real positive steps forward.

Besides quickly pencilling out some plans for next year, another useful task to do right now is take a field inventory.  Since most crops for the season are in the ground (or have been harvested) you can roughly project what your yearend sales will be. Grab the page of crop yields from the front of a Johnny’s Seeds catalog and walk your fields with a pad of paper and a pen. Estimate the row feet of each crop and figure what the yield may be. Next, figure what the anticipated price you’ll receive for the crop, and write down the result. You’ll end up with a total field inventory that you hope to sell, but also get a feel for which crops are worth more per row foot than other crops. Taking field inventory isn’t too time consuming, maybe an hour or so, but it will help you decide where to put your efforts if your time is spread thin.

And for just a little more time invested, you can project what expenses you will have until the end of the year, resulting in a projected net profit for the year. Payroll will probably the biggest expense: estimate how many workers and workweeks are needed to finish out the season. Look at last year’s books as a gauge for other projected expenses. You can get a pretty good idea where you’re your net profit will be at the end of the year.

My last piece of advice is to take a break. Go on a mini vacation, even a day. And give your employees some time off as well. Getting out of Dodge for a little R&R is refreshing for all, and gives needed distance from the farm. Working too hard for too long creates tunnel vision, and lack of perspective. You’ll return to work fresh and see things differently. Life is short, take time to enjoy it.