The Moringa tree (Moringa oleifera) has many names throughout the world, likely due to its profligate uses. It is called the ‘drumstick tree’ due to the shape of its seed pods, the ‘horseradish tree’ because of the faint scent and flavor of horseradish that the tree’s roots give off, and the ‘ben oil tree’ drawn from the oil that is pressed from the seeds. The most explicit of all its names, though, is the ‘miracle tree’ which is inspired by this unassuming tree’s seemingly endless benefits. Ayurvedic medicine (the millenia-old tradition of herbal and dietary medicinal practices from India) has long made use of the Moringa, but now, having been inspected through the lens of modern science it has increasingly come of 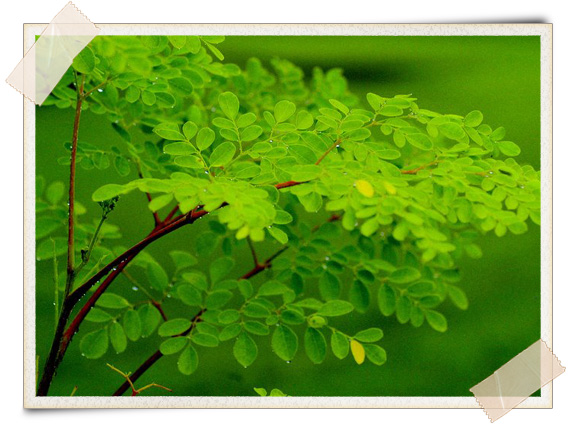 interest to people all over the world as a solution to several disparate problems. Having value as a food item, a medicinal stock, a source of food oil and biofuel, and a water purifier, there is little wonder why it came to be known as the ‘miracle tree’.

Nearly every part of the tree is in some way edible. The roots, with their horseradish flavor, are stripped of their bark because of its high alkaloid content, mixed with vinegar and used as a condiment (Parrotta, 2009). According to Ted Radovich, young green seed pods which are high in ascorbic acid are boiled, steamed or pickled like string beans or asparagus and are a common addition to soups and stews in the tree’s native areas (2009). The seeds contain 30-35% oil  that is high in palmetic, stearic, behmic, and oleic acids and has similar flavor and properties to olive oil making it a highly nutritive alternative to other vegetable oils (Garcia-Fayos et al, 2010). The flowers are also sometimes eaten, though this practice will prevent seed pod growth. The real nutritional value of the Moringa tree, however, is in the leaves. Small, tripinnate and tender, they are similar in appearance to the leaves of North America’s native Black Locust tree. They are typically eaten or cooked fresh, though powders, extracts and teas do manage to retain much of the nutritional value of the leaves. The Moringa leaves’ nutritional contents are eye-popping to say the least.

All values based on common food values per 100 g/weight; from Nutritive Value of Indian Foods, Gopalan, et al., 1989.

As if this were not enough, the leaves also have considerable contents of trace minerals, beta-carotene, thiamin and riboflavin while the protein present has “…significant quantities of all the essential amino acids,” making it a complete protein (Parrotta, 2009). It is then immediately apparent that this plant represents a nutritional goldmine. Because it is grown almost exclusively in the parts of the world that are most malnourished its value as a food item becomes all that much more clear. These are areas where reliable and sustainable sources of protein and vitamins are scarce. Protein and calcium  are typically sourced from the meat and milk of livestock, an expensive and labor-intensive practice that requires 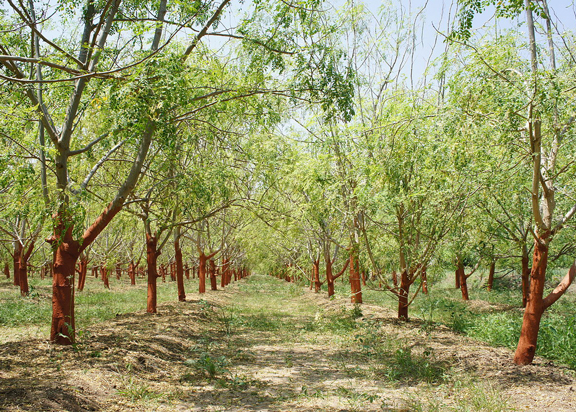 space, infrastructure and fodder. Therefore, a family who might not have all the necessary requirements for a goat or cow can instead plant a couple Moringa trees and have all their protein needs fulfilled with the high vitamin, mineral and potassium contents to boot. Additionally, there is substantial literature promoting its use as fodder. Radovich cites studies wherein up to 50% of traditional feed was replaced with Moringa leaves resulting in high rates of weight gain (2009). This simple tree could therefore pose at least part of the solution to the nutritional famine present in much of the developing world.

Moringa’s useful properties are not limited to the edible, however. There are considerable medicinal attributes that began as folk medicine but have since been corroborated by scientific study. Poultices made from leaves and bark act as antimicrobial agents when applied directly to wounds while leaf extracts are well known to be antifungal and antibacterial in nature (Radovich, 2009). Radovich goes on to state that because the Moringa is in the Brassicales order it contains isothiocyanates which have been shown to have antitumor and anti-carcinogenic properties, a claim that is backed up by studies at Johns Hopkins University (2009).

Ben oil, the name given to the oil pressed from Moringa seeds due to the presence of the unique behenic acid, is likewise useful beyond the kitchen. Long lauded for its ability to act as a lubricant for fine machinery such as watches and clocks, it is also being considered by various groups as a source of fuel oil as the seeds contain 30-35% oil (Garcia-Fayos et al., 2010). Further studies have demonstrated that the oilcake, or the organic material left over from the oil pressing, has some remarkable properties as well. Parrotta cites one wherein this oilcake was proven to be an effective fertilizer (2009). The National Research Council of the National Academies, in their second volume of The Lost Crops of Africa, espouse the work of various groups operating in Africa that have sponsored the use of Moringa oilcakes as a flocculant (coagulant) in turbid water while simultaneously assisting in the removal of bacterial and viral populations at the (2006).

Extracts taken from leaves “…have been found to increase Rhizobium root nodulation, nodule weight, and nitrogenase activity in mung bean (Vigna mungo) when applied to seeds or as a root dressing” according to Parrotta (2009). The hardy fibers that can be extracted from the tree’s roots have traditionally been used in making paper, mats, and cordage throughout its realm, while the mucilaginous gum present in the stems are used in animal skin tanning (Radovich, 2009).

The Moringa tree originated from a broad swath of northern India and southern Nepal stretching from western border of Pakistan to the eastern border of Bangladesh. Its range of distribution has increased greatly; according to Parrotta:

It is cultivated and has become naturalized in other parts of Pakistan, India, and Nepal, as well as in Afghanistan, Bangladesh, Sri Lanka, Southeast Asia, West Asia, the Arabian peninsula, East and West Africa, throughout the West Indies and southern Florida, in Central and South America from Mexico to Peru, as well as in Brazil and Paraguay  (2009). 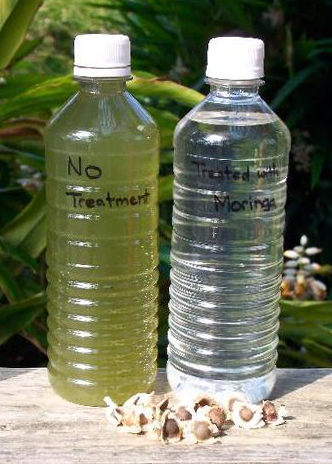 It prefers recently alluviated soils (soil that has had major deposits of sediment and nutrients made by inundation of a river or stream, creating a fertile soil composure), especially well drained sandy loam types (Parrotta, 2009). It grows in areas reaching from sea level to about 1400 meters (4,500 feet) above sea level with full sun exposure. Because it is native to subtropical climes with  low rainfall, Moringa is considered drought tolerant. Indeed, it has been reported to grow well in arid regions averaging less than 300 millimeters (11.8 inches) of annual rainfall (Radovich, 2009), making it a prime candidate for cultivation in drought prone areas.

The Moringa tree takes very well to domesticated cultivation and proves to be a fairly easy and straightforward crop to grow. In favorable conditions growth is rapid: 1-2 meters in the first 3 years and reaching an average height of 10-12 meters in maturity (Parrotta, 2009). Fruit production is similarly high, ranging from 600-1600 pods annually after the first three years with harvests occurring twice a year (Radovich, 2009). It can be propagated either from seed or cutting, though the latter is generally considered preferable as resultant fruit production is more plentiful and of a higher quality than from seed (National Research Council, 2006). Propagation from seed appears to be superior in semiarid regions as root development is more vigorous (Parrotta, 2009). Seed viability is something of a concern for rural and resource-deprived areas however as it decays at an exponential rate reaching 0% viability after three months if not held in cold storage or hermetically sealed containers (Radovich, 2009). When grown in block or row patterns the tree prefers a minimal spacing of 3×3 meters with best results at a spacing of 5×5 meters. Due to its rapidity of growth after cutting, it is well suited to coppicing and use as a living fence. In fact, it is typical for growers to pollard their trees much like other orchard crops as it reduces crown spread, making for easier harvesting of leaves and pods while promoting new branch growth (Radovich, 2009).

Clearly, there is a lot to consider in regards to the Moringa tree. As it has already been exported for cultivation throughout the developing world and beyond, there is reason to believe that it could be further exploited for use in supplementing the diets of some of the world’s most malnourished areas. There are, however, other considerations to be made about the spread of Moringa cultivation, namely rising Western interest in superfoods. As this market grows there is no reason to believe that Moringa products will not ultimately become as popular as the acai berry or quinoa. Considering that there are limited places where Moringa can be grown in North America it is conceivable that as occidental demand rises it will be increasingly met with supply from the developing world, potentially making it unaffordable to the people who most need it. That being said, Moringa is a crop that holds great promise for resolving some of the world’s most pressing agricultural issues and deserves further investigation as such. 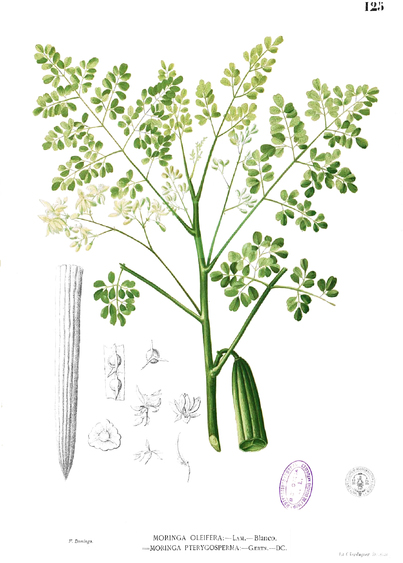 For more information about Moringa, its benefits, and how it is cultivated, please refer to the bibliography listed below.