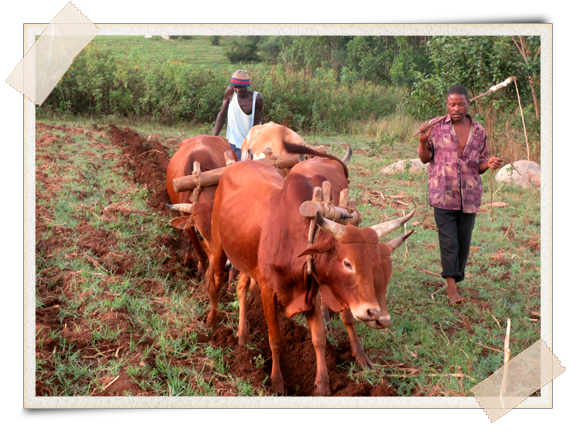 Not many truly American stories begin in a place like Kosodo village. Every once in a while though, we come across a story that matches the humble ideals etched into the base of the Statue of Liberty. Caleb Omolo’s story starts with four older siblings and six younger. The fifth child in a family of eleven, Caleb grew up in extreme poverty. That was before his father succumbed to lung cancer, and Caleb’s mother was left to support eleven children alone in rural Kenya. Despite the dire circumstance of his upbringing, luck fell on Caleb when he was accepted at SUNY New Paltz, a medium-sized state school ninety minutes north of New York City.

Caleb went on to major in Geography, and after graduating from New Paltz would stay in America for thirty years, sending money home to support his family. In the back of his mind, though, Caleb always dreamed of returning home, taking the lessons he’d learned in the US and applying them there. He wanted not only to send his money back to help his family survive, but to return with knowledge that would help generations of Kenyans reverse the trends that were destroying the livelihoods of farmers nationwide.

Five years ago Caleb finally made the reverse migration back to his home, but not before stumbling upon the growing sustainable farming and permaculture movement on the web. For thirty years Caleb had been thinking of the living conditions in rural Kenya, where most families were struggling to keep their land fertile after years of intensive, chemical-dependent agricultural production. The soil quality and fertility dropped precipitously and Kenyan farmers were trapped in the cycle of adding increasing amounts of fertilizers to achieve the same crop yields. Like addicts chasing the dragon, every year required more inputs to get the same output. These industrial agricultural inputs also destroy native microorganisms and earthworms, making the soil less productive. In the long run, as the soil degrades, many farms are deserted as farmers search for more fertile land. 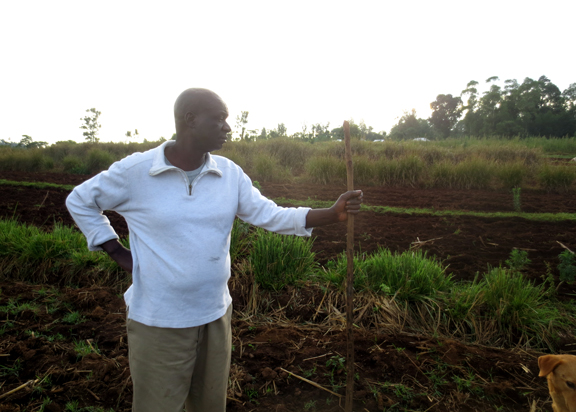 the American heartland) had also made the land much more susceptible to soil runoff, which not only damaged the fecundity of the soil, but led to massive pollution going into Lake Victoria, the largest body of fresh water in Africa. When Caleb left Kenya, his family and others were struggling to get by. When Caleb returned to Kenya, even the land was struggling to get by. Many in the region he grew up in were slipping from poverty into hunger despite adopting the techniques and materials from the United States, the biggest producer of food in the world.

Caleb had trouble understanding what had gone so wrong when people did everything they thought they were supposed to do. They followed a model of success and achieved greater and greater failure. Permaculture seemed to offer Caleb the answer he was looking for. He saw that the principles of permaculture could be incorporated into all levels of agriculture and even architecture, community development and improving social interactions and cooperation between farmers.

With these ideas in mind he started his farm in Kosodo Village. Within the district of Rhongo, southeast of beautiful lake Victoria, Caleb’s one-man permaculture movement began. The farm now grows a variety of fruits and crops as well as raising animals and fish. The type of farm Caleb runs is designated as a “shareholder” farm in Kenya. It provides all the nutritional needs of the farmer and family but manages to sell some of what it grows and raises as well. It is a kind of subsistence plus profit model that is diametrically opposed to the monoculture farming that has swept aside the subsistence farming methodologies of a few generations ago.

As the farm grows almost all of that Caleb eats, it also focuses on larger staple crops such as corn and groundnuts (peanuts). This is typical of many smallholder farms in Kenya, but Caleb manages without any industrial fertilizers. The animals Caleb raises are housed within the “compound,” a group of small buildings in the center of the farm. The compound is also where a permaculture “food forest” is housed, providing many of the fruits and other small crops. The larger staple crops and fish are grown outside of the central compound further afield. 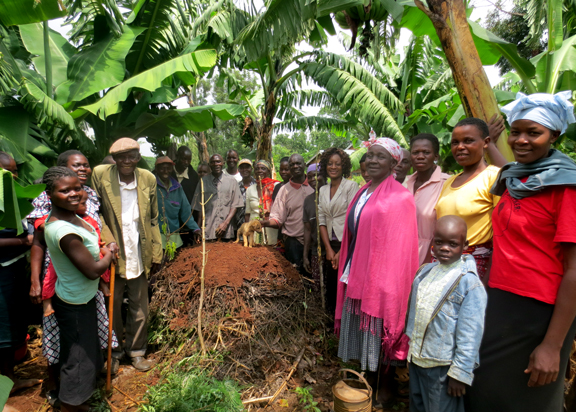 Five years of putting his research into practice has taught Caleb a great deal. He realized that there is a strong need to farm with nature rather than against it and when a farm learns to use natures’ powers the bounty can be large. Caleb’s increased production has allowed him to not only feed his family, but to bring ample food to market and improve his personal livelihood. The three principals of permaculture that Caleb lives by are: care for the earth, care for the people, and share the surplus.

Contrary to what some believe, permaculture and sustainable agriculture movements that “turn back the clock” on many of the fertilizers and chemicals scientists have developed since the 1950’s, are not a movement “against science.” On the contrary, Caleb’s methods require a greater understanding of biology, hydrology, and paleontology than ever before. Sustainable agriculture requires constant hypotheses, tests, and experimentation. The movement strives to take the traditional knowledge of thousands of years of farming and modern science to harness the innate abilities the biosphere has provided for farmers to increase their crop yields in the most natural, safest, and least toxic way.

Using an abundance of locally available resources, Caleb’s farm has transformed into a 100% organic farm. Caleb’s farm strives to improve the relationships that are the foundation to any agricultural production system:; plants, soil, water, animals and the community at large. It is a system where humans are integrated into nature and the environment.

One of the most unique and important aspects of Caleb’s sustainable techniques are the application of Vetiver grass. Like an iceberg, the depth and mass of Vetiver grass is completely hidden from view. While appearing relatively normal from the surface, beneath the soil Vetiver grass plunges meters down and meters wide. The roots of the grass grow so fast, and far, and abundantly that a few rows can significantly reduce soil erosion.

In 1980, while Caleb was still living and working in the United States, the World Bank quietly introduced the grass to Africa. The goal was not only to fix soil erosion but also to purify agricultural waste from upland streams and rivers. It was an experiment on soil and water conservation, that research has proven very successful.

The Vetiver Grass when planted in single rows, about 15cms apart, forms natural hedges, which are very effective in controlling and slowing water movement. 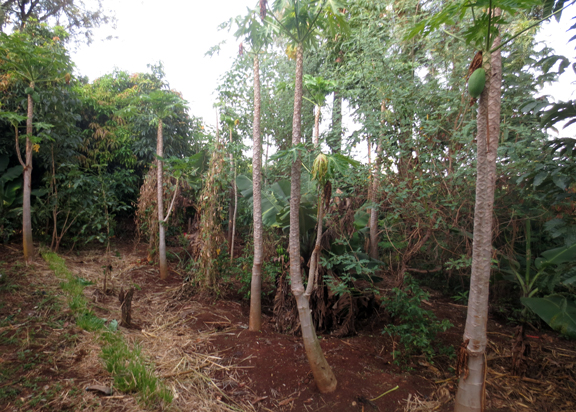 This technique stimulates the soils ability to absorb water and to retain it for longer periods of time. The hedgerow also helps divert runoff water. The roots also aid in improving the soils populations of microorganisms and nutrients. This is crucially important in areas that have been divested of their populations of microorganisms from years of using industrial fertilizers.

The Vetiver technique is very valuable to farmers around Kenya, whether farming in dry or wet environments, flat or sloped, fertile or poor soils.  Vetiver grass is helping save Africa’s dwindling top soils, and the deep and fast growing root system also makes Vetiver very drought resistant and highly suitable for steep slope rehabilitation and stabilization.

Many of the permaculture techniques Caleb learned in the United States, and the Vetiver grass technique that greeted Caleb on his return, have not only enhanced Caleb’s small farm, but become the cornerstone of his efforts to spread his knowledge to neighbors and small farmers throughout Kenya. He works with several farmer groups and is always seeking collaboration from the international agriculture community.

Caleb is dedicated to bringing permaculture principles to a wider audience throughout rural Kenya. His mission is to work with local farmers to help promote permaculture and sustainable agriculture. Part of Caleb’s success has been tied to the hands-on methodology with which he has strived to change one farm at a time, getting in the fields as a fellow farmer and not a traditional instructor. The farmers share traditional knowledge and Caleb new innovations so together they can learn to improve their farming techniques.  This grassroots approach helps both the farmers and Caleb achieve a productive and environmentally friendly method of agriculture. 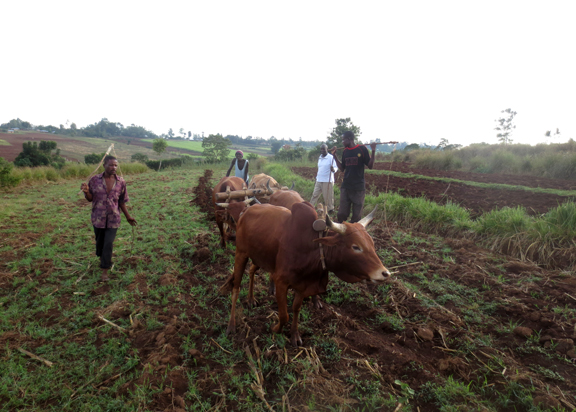 For information on volunteering or visiting Caleb’s farm in Kenya please visit www.kosodopermaculture.com