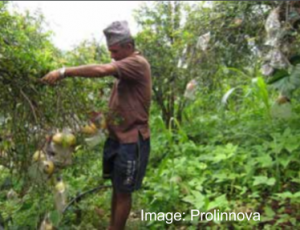 Ramechhap district, located in the mid-hills of the Central Development Region of Nepal, has been identified as one of the most vulnerable to climate change in the country. Longer, increasingly severe droughts have diminished agricultural water stores, forcing smallholder farmers to turn to drought-resistant crops. Pomegranates, due to their ability to grow well in low-water conditions, have thus become quite popular.

Hira Lal Acharaya pioneered pomegranate growing in Ramechhap. Early on, he noticed fruit flies damaging his crop. Unsure of a solution, he reached out to agricultural experts, who suggested he cover the crop with netting. Yet flies managed to get through the nets and continued to cause damage. Unhappy with the results, Heera Lal began experimenting on his own. He found success when he covered the fruits with small jute bags, but the cost of the bags made this solution prohibitive. Plastic bags kept out the flies, but led to poor-quality fruit. Next, he tried bagging the fruit with local newspaper. This technique successfully kept the flies off while allowing the fruit to grow and ripen well. Hira Lal had discovered a viable, low-cost solution! With documentation and dissemination help from Prolinnova, Hira Lal has shared his technique with more than 500 farmers across Nepal.

Learn more about this farmer innovation from Prolinnova.

Climate change is negatively impacting farmers around the world. Unpredictable and erratic weather patterns, lack of water, and inconsistent harvests are devastating to farmers whose livelihoods depend on steady production. Hira Lal’s innovation has provided farmers with an affordable way to combat the negative effects of climate change and secure reliable income streams. Steady income is essential for farmers’ ability to continue farming, their ability to send their children to school, their food security, and much more.