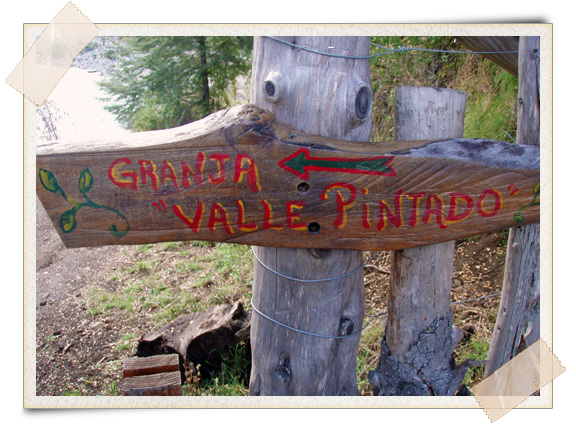 The trail veered off of the main dirt road into the woods, I could hear the river in the distance, “are we walking in the right direction?” I asked. Continuing down the path, the beautiful Rio Azul finally came into view. We meandered through a few farms and past a rickety swinging bridge until a small hand painted wooden sign read, Granja Valle Pintada, or “Farm of the Painted Valley”. Up the path we went, and as soon as the hand-made earthen buildings came into view, we were greeted by two friendly WWOOFers. I knew we were at the right place.

Alex Edleson, the caretaker and farm manager at Valle Pintada, along with seven others, invested in this property almost ten years ago. The farm, as he puts it, is a community space, for everyone, and it has been “lent” the land that it sits on by the property shareholders. With a background teaching in Waldorf education, and a deep understanding of Rudolf Steiner´s community agriculture ideals, Alex, with the help of others, has created a welcoming place for people to come and work together growing real food. Inspired by the book Farms of Tomorrow Revisited, Alex believes that “with an empowered community that understands the need for local food, the needs of the farm and the farmer can be met.” It is through this ethic, and the desire to grow wholesome organic food for the people of his community, that led Alex to initiate the first CSA in Argentina or as it is called there, Granja Associativa.

The farm is nestled in a small valley adjacent to the Rio Azul, and paying close attention to the weather, especially frosts, is a key component to the management of the operation. Currently they have peach and apple trees and are growing a number of vegetables such as, squash, potatoes, cabbage, rutabaga, tomatoes, kale, green beans, leeks, strawberries, daikon, and a few others. A well-planned rotation is used, and abono verde or green manure, comprised of rye, clover, and oats, is implemented in all of the beds to feed the soil. 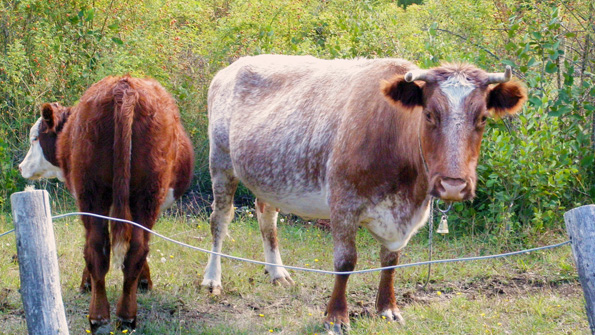 Another interesting aspect of the granja is Alex´s use of their dairy cow´s urine. It is mixed with water at a 1:5 ratio and is used to supply the plants with extra Nitrogen. At times, he will also mix water with well cured compost, similar to the biodyanmic preparation or compost tea, and use it as a fertilizer throughout the beds. A handmade greenhouse adorns the edge of the field made of bamboo supports and a lower structural wall made of stone-filled industrial pallets. This recycled material greenhouse is home to his tomatoes, melons, green beans, and squash. All water is from a spring, and is occasionally pumped to a gravity cistern above the garden. With its strategic location in the valley, wind breaks, and fruit trees, Alex has created a unique microclimate that helps in frost prevention, and enables his crops to flourish for the twelve families invested in his CSA. 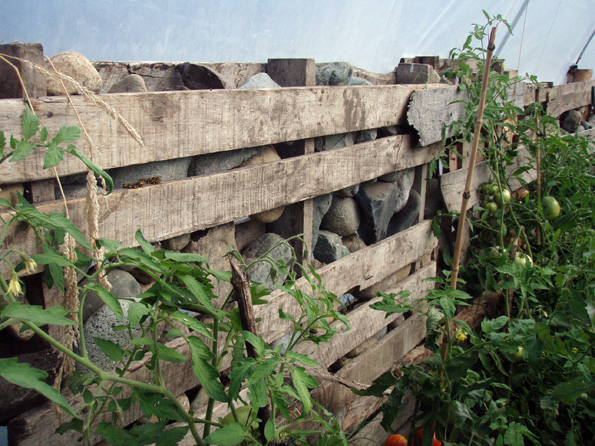 Starting the first Granja Associotiva or CSA in Argentina certainly came with its challenges. With the belief that community based agriculture will save the small diversified farm, Alex found the help of twelve families living in El Bolson, the town just over the hill from his valley. Alex believes that the word consumer gives rives to a passive participation in reality and says that “nobody is specifically a consumer; no one is free from what they consume.” Since most people in Argentina have never heard of a CSA, he was able to explain its value using the guiding principals of Steiner´s Associative Economics, which emphasizes the development of a conscious coordination of producers, distributors, and consumers. It understands the global economy as a single, closed domain, through which human beings meet one another’s needs.

Valle Pintada supplies twelve families almost the entire year with not only fresh vegetables and fruits, but also value added products such as chutneys, jams, krauts, cheeses, and even a little homemade beer. Alex has created a very unique system to work with the budget of the average Argentine family, a model that could certainly be implemented in low income areas of the U.S. and U.K. as well as in other countries who are new to this type of agriculture. Each year he holds four assemblies, to meet with the families and discuss the farm´s successes and needs. During the winter assembly, he lays out the budget for the following season. In the U.S., this is generally when the families pay the full amount of the CSA up front. In Argentina, this can be a bit pricey, so the families agree to pay 60 percent of the annual cost up front, and the final amount in installments throughout the rest of the season. This is where Alex says, “The family and the farmer are now invested, together, in the most trialing part of the year, where all of your time, energy, and money go into the land, with very little return until the spring.” This is what community agriculture is all about, with everyone invested, everyone succeeds or fails together, everyone shares the risk and in turn works hard throughout the season. 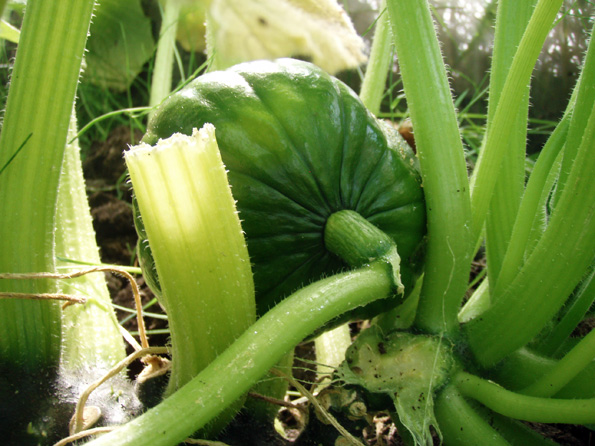 Alex believes that all goods produced from the farm should go to the families; this is why he includes all of his value added products in the weekly pickup, but with a little twist. Alex has created a very unique 1 to 5 point system to represent each good. Though it is more or less arbitrary, it accounts for the different costs of each value added product. For instance cheeses are 5 points, Jams are 4 points, and herbs are 1 point. Based on the estimated quantity of value added goods, independent of share cost, the families are allotted a certain amount of points for the season. At the pick up each week, they then can ´spend´ the points however they choose. What a great way to add a little diversity to the CSA experience, all while accurately representing the costs of your value added products. Alex is a visionary, and due to his creative thinking and systems like these, he has been able to cultivate a robust CSA, not just with families that show up and buy, but anyone who comes out to work and is invested in its prosperity. 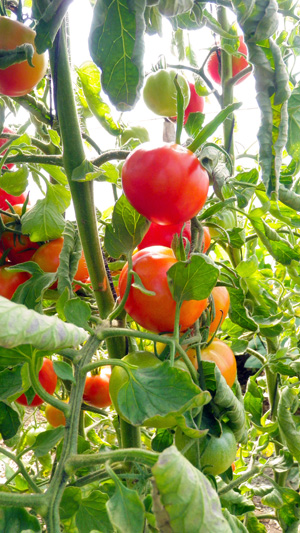 “This land has a special history” Alex says, “it lies on the site of the old Doña Rosa campground, where the wizened old woman who owned the place would walk around to the campers offering them fresh bread from her earthen oven.” Apparently she was a witch with a green thumb, and could grow crops that nobody else could grow, all due to the fact that the area around El Bolson can receive a frost any day of the year. This, as you can imagine, leads any vegetable producer to get creative. Alex has been getting creative through seed saving and the introduction of cold hearty plants such as Siberian tomatoes. Each season he marks the plants that produce the best seed, and plants them the following year. Slowly he is creating more locally adapted cold hearty plants, and as the Thomas Jefferson Quote goes, “The greatest service which can be rendered to any country is to add a useful plant to its culture.” Alex is doing just that, and with the top 10 seed companies of the world accounting for 67% of the global proprietary seed market, this is exactly what we need to be doing. He is also developing a seed bank adjacent to his house, out of wind and insect pollination range of the garden. Not only will this help Valle Pintada, but also it will connect other local growers, seed savers, and farmers of the North Western United States who share a very similar climate. Alex and the Valle Pintada community have really helped lay a foundation for flourishing organic agriculture in Argentina.

As the visit came to an end, our discussion again turned from systems to ethics. With a hint of Steiner in the air, it was clear that Alex has a passion for the land, and truly believes in what he is doing. This passion is a reoccurring theme in organic farmers, and those who operate a system on holistic principals; as opposed to the classic westernized, reductionist approach of simply treating the symptoms. The direction, sadly, that organics could be going. As the demand for organic food increases, many producers move to maximizing profits by implementing the input heavy monoculture approach, while still working within the certified organic framework. This is the mindset that Alex is avoiding. He does not use chemicals. He works with nature, not against it. Through seed saving, Alex is using the ancient and holistic approach to plant breeding known as “horizontal resistance”, which is a breeding technique that focuses on improving the overall survival ability of plant populations through utilizing the partial resistance of multiple genes, as opposed to the method of breeding for single gene resistance, known as “vertical resistance”. Alex is a visionary with a close connection to the land and people of his community, making Granja Valle Pintada a unique gem that anyone can learn something from.