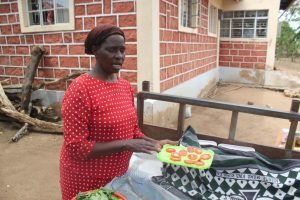 Helen, one of nine children, grew up on helping out on her parents’ farm. Once finishing senior school, she went on to receive a certificate in nursing, leaving farming behind. The 63-year-old spent years working for the government, recently moving on to practicing nursing privately; a career farming was always far from her mind. That is, until a drought in 2003 led to poor harvests and a drastic spike in food insecurity. Remembering back to her childhood when she would watch her mother sun dry meat to provide her family with a year-long supply, Helen had an idea: sun drying excess produce for times of scarcity.

Building off of her mother’s technique for sun drying meat, Helen began experimenting and sun drying many different types of vegetables. She soon found that by washing the vegetables, immersing them in hot water for five minutes, and then drying them in the sun on trays and tarps (occasionally turning round fruits and vegetables to expose all sides to the sun) she was able to preserve a wide range of produce for many months. She has used the technique to dry many crops, including amarantus, tomatoes, potatoes, and leafy greens.

Helen and her family have relied the sun drying technique since she developed it in 2003. Since then, other community members have begun using it as well. 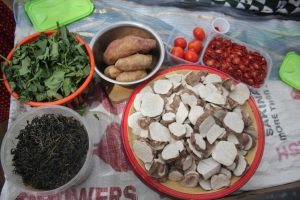 A variety of fresh produce, some already dried and some ready to be dried.

Easily learned and not needing external inputs, Helen’s innovation has ensured her family and community has food increased food security; in times of scarcity, the sun-dried foods provide a consistent, nutrient dense food supply. With unpredictable weather conditions becoming the norm, food preservation techniques like Helen’s will play an increasingly important role in making food security and food sovereignty a reality for all—especially the 2 billion whose livelihoods depend on smallholder farmers.