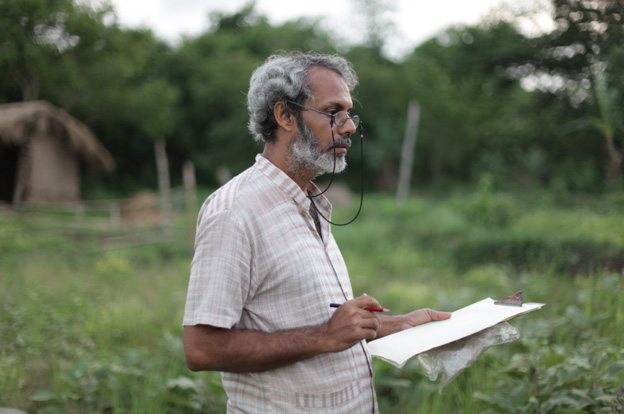 Below the surface of farms across eastern and central India live colonies of termites. Held at bay by heavy rains during the monsoon season, these termites will surface and feed on crops if a dry spell hits during the normally wet months—as few as one to two weeks of no rain can lead to devastating damage to crops and destroy harvests. Sufficient irrigation could theoretically solve this termite problem, but this solution is expensive and impractical for the resource-poor farmers, especially where surface irrigation infrastructure (such as canals and ponds) is absent. Desperate for a more feasible solution, Debal Deb innovated a method of termite control on these farms without resorting to irrigation. Instead, he turned to mulch.

To start, Deb collects green leaves and dry leaf litter from around his farm and the surrounding area, including farm hedges, forests, private orchards, and roadside plantations. Both green and dry leaves are spread over the farm soil as mulch, covering the base of each plant. The mulch retains soil moisture around the plants during the dry spells. In winter, dewfall will also trickle underneath the mulch cover. During dry spells, termites come out to feed and, instead of attacking the crops, they attack the leaf mulch. Additionally, because the termites consume and rapidly decompose the leaves, they facilitate the recycling of nutrients to the soil and enhance the soil quality around the crops.

A Growing Culture partnered with Debal Deb and Center for Interdisciplinary Studies and Basudha Trust in Odisha, India, to document this technique, safeguarding the knowledge for generations to come.

Farmers across Odisha have adopted Deb’s mulching technique as a means to control termites and protect their crops. Because they are able to gather the green and dry leaves from their property, the solution has not only saved the farmers’ crops but also effectively saved them money by eliminating the need for external inputs. This also means that farmers can sustain this practice in the long run, as they don’t have to worry about whether they have the money to buy the inputs each year.