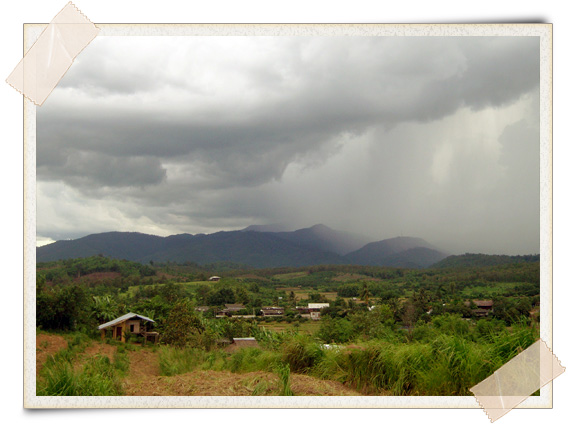 Project Concept: To experiment with and model an integrally sustainable way of living in the wet/dry tropics. This project aims for sustainability not only in the physical environment, but also in the social environment, our physical bodies, and the spiritual, emotional, and intellectual realms. Permaculture is the system that will primarily describe how the project moves forward on a physical plane.

The 10-acre (four hectare) site is situated in the low hills of northern Thailand, between the conventional rice/soy/corn farms of the local village and a beautiful expanse of second growth national forest. It features demonstrations of humanure composting toilet systems, earthen buildings, and a medium scale water harvesting system, including a 2-million liter dam and about 500 meters of swales. The project also is host to production gardens and a diverse food forest, with over 40 varieties of fruit, established in 2007-2010. The project serves as an education center, hosting frequent permaculture design courses on site and a number of building workshops and internships throughout the year. Adjacent to Panya are two other sustainable living projects, including Pun Pun Educational Center, a seed saving center and education center for Southeast Asian activists as well as international sustainable living enthusiasts. As a group of communities, these three projects aim to be as self-sufficient as possible, model a joyous, integrated, healthy way of life, while continuing to learn and share along the way.

Detailed Project Description: The project was proposed in 2002, and received sufficient funding for the purchase of land in 2004, and then a second installment of funding helped to get the project officially rolling in 2006. In all, 12 individuals each donated $4,000 toward the project, and since the initial investment, no additional outside funding has been needed. It has achieved economic self-sufficiency within a two year period through the hosting of permaculture design courses, internships, and natural building courses.  By the end of 2010, Panya had becoming the first volunteer-run, profit-sharing permaculture education center of its kind. 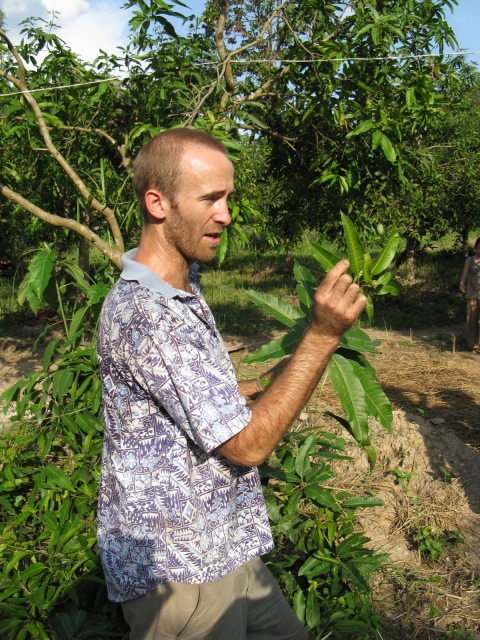 Education: The model of starting as an education center worked very well for this community, and is highly recommended, as each workshop provides three key services: it helps to build the infrastructure of the project, it helps to fund the project, and it shares the knowledge and enthusiasm with others.

In November of 2006, the first permaculture design course was taught by Geoff Lawton and Thai permaculture teacher Loong Yoot. The course was attended by a mixed crowd of 30, including Local Thai students, Panya Project community members, and international students.

Since then, the Panya Project has hosted courses taught by Cam Wilson, Ethan Roland, Chris Shanks, Melissa Breed, Christian Shearer, Richard Perkins, and John Champagne. The courses at Panya always receive high accolade, and students regularly give feedback indicating that they leave feeling inspired to make change in the world. Along the way, the Panya Project has also hosted school groups, including a yearly week-long educational immersion for high-school students from the International School of Bangkok.

Many of the structures on the property were built as part of the workshops and internships as well, including a two bedroom adobe house. There are plans to continue building using earthen techniques to provide sufficient space for students and community members.

Permaculture Outreach and Consultation: As an extension of the educational aspect of the community, one of the community members, Christian Shearer, is an active permaculture design course teacher, having taught in Thailand, Malaysia, India, Taiwan and the US. He is also a lead designer for Terra Genesis International and does design work out of Panya.

Earthworks: The first course culminated in an integrated final design for the site, and within two weeks the earthworks were in, leaving a 2-million liter (500,000 gallon) dam at a high point on the property, and about 500 meters of water-harvesting swales. In truth, this dam did not hold water.  For five years the community has struggled with water, especially in the dry months of March, April and May. In the winter of 2010, Panya was generously donated a bentonite clay / fibre pond liner, which should remediate the situation. As of this writing, it has yet to be installed. In the coming years, this water system should make the Panya Project water independent, using the abundance of the monsoon rains to carry them through the hot, dry months. It should also help to build the water table for the benefit of the entire local ecosystem. 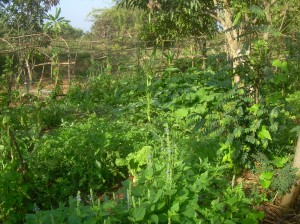 Vegetable and Herb Garden: During the first PDC held at the site, a veggie garden on contour was put in place near the kitchen. Each year the garden expands, and though the community is not yet self-sufficient, each year brings them closer to achieving that goal. By the winter of 2010/11, Panya had 37 annual garden beds complete with drip irrigation, and full of food. Of course, this is in addition to all the perennial vegetables on site.

Animals: The Panya Project hopes to integrate animals into its systems as well. Fish, prawns, and ducks in the ponds, cattle and water buffalo for dairy and meat as well as grass management and fertilizer, pigs for food waste recycling and compost turning, and chickens for eggs and meat. Because of the turnover of volunteers at the Panya Project, the members have stuck to chickens and fish.

Natural Building: The Panya Project uses two main forms of earthen building in constructing its infrastructure. Adobe is well known throughout the world, using sun-dried bricks. Wattle and cob is a technique that is believed to have started with Jo Jandai at Pun Pun Educational Center. It uses a combination of stick-frame and earthen materials to sculpt the structure. Panya also uses eucalyptus wood, bamboo and second hand materials that are readily available for timber framed structures. By the summer of 2008, two years into the project, there are six earthen structures, two bungalow style huts, and a large open-air “sala” where the courses are taught, meals are cooked and enjoyed, and where the library and office are currently located.

It is vision of the community that additional small earthen structures would be built so that all students and community members could have a more-than-adequate place to stay for their time at Panya. They hope that each person can thrive in all of their endeavors, and a wonderful place to sleep is important for that.

The addition of a ferro-cement sauna at the top of the hill has added to the human sustainability of the site, and being all wood heated from pruning off the mango trees, it is zero cost to operate as well. 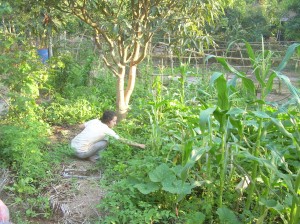 Personal Development: The community imperfectly strives to encourage each individual to explore their own beings, using whatever wisdom tradition, rituals, or practices that work for them. It is important to the community at Panya that each person be aware of how their own beliefs and attitudes shape and define the world they experience. Physical health through yoga, swimming, working, and good nutrition are encouraged and practiced, as are meditation, contemplation, and reflection for the well beings of the spiritual, emotional, and psychological aspects of each person. Compassionate communication and supportive interactions are also important parts of daily life.

Another goal of the community is to continue to learn and grow, which is often addressed through guest teachers, evening discussions, and diving into new projects. In this way, even the intellectual aspects of each individual are kept fine-tuned.

1. November to May, the dry months: These months are devoted to teaching courses, building earthen structures, working on vegetable gardens etc.

2. June to October, the wet months: These months are devoted to working on the broad acre. This is the time to plant trees, mulch, and work on any earthmoving projects.

2006-2010: Build the infrastructure for the project, including all the water systems, buildings, access (roads and paths), food forests, and gardens. Plant the fruit trees, the timber crops, and the perennials. Dig and establish the fish ponds and aquaculture systems. Set up infrastructure for animals including barns, movable pens, fences, and milking stations. Spread the news! Use the site as a vehicle for the spread of ideas including permaculture, natural building, integral living, and the importance of balance for a joyous life.

2010 and into the future: Expand the education facilities and capabilities of the project. Focus more on outreach, consultation and service. Fine-tune the systems, and welcome the coming of fruit from the wide variety of food crops on the land. Research and implement new and creative ways of becoming ever more self-sufficient, and sharing the bounty we harvest. 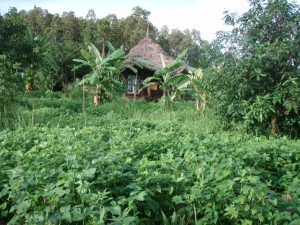 The Panya Project has a detailed design laid out to be implemented, but the people of the project have also realized the importance of being open to change in every moment, as well as being unattached to where they are going, where they have been, or where they are at the present time. The future is unknown, and that is exciting!

Project Needs: The project is doing very well, thriving both in the educational aspect as well as in the ecological aspect of the site.  The money the farm uses is kept to a minimum and this has allowed Panya to thrive.

In the coming year (2011/2012), Panya will be rebuilding their main building facility, and this will take a large influx of money, the whole project is expected to cost the community about $7,000. And though they were donated the pond liner for their dam, the project will still cost them $1500 to complete. Most likely the community will have to borrow from friends and supporters to make this happen.  If anyone would like to donate toward this effort, please contact them at: [email protected]