The Reverse Phenology of Faidherbia albida

Faidherbia albida is a unique tree species native to Africa, the Middle East, and India1. Faidherbia albida is a member of the family Fabaceae, subfamily Mimosoideae, and tribe Acaciaea2. It is a thorny tree that produces yellow flowers and orange to brown colored seed pods, which fall about three months after the flowers bloom. The pod often curls and thus the tree is commonly known as the Apple-Ring Acacia2 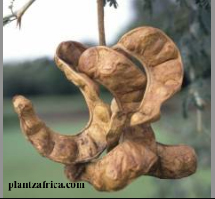 Faidherbia albida in the Rainy Season

Soil is a resource that must be managed and maintained. In dry climates, soil is susceptible to erosion and soil fertility is low. Restoring organic matter to the soil is one method to mitigate these concerns. Soil organic matter is plant or animal residues that are in various stages of decomposition. The addition of soil organic matter adds plant nutrients to the soil. Soil organic matter also allows soil particles to aggregate. In turn, proper soil aggregation improves soil aeration and water holding capacity while reducing surface crusting and erosion5. 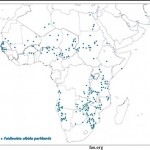 In semi-arid and arid regions, trees with a traditional phenology will shed their leaves in the dry season. Without moisture the leaves decompose slowly on the soil surface. The organic matter is permanently lost from the system, and the nutrients are taken from the soil as the plant produces leaves are removed. However, Faidherbia albida sheds its leaves in the rainy season. The moisture encourages microbial growth and supports the decomposition of the leaves. The decomposed leaf matter becomes incorporated into the soil in the form of soil organic matter. In this way, Faidherbia albida improves nutrient cycling in drier climates6.

In a 1992 study performed in Niger, soil samples were taken in areas planted with Faidherbia albida and compared to soil samples from areas without the tree. Samples taken near the tree had a higher nutrient composition with more vital plant macronutrients: nitrogen, phosphorus, and potassium. The soils influenced by Faidherbia albida also appeared to have increased water-holdingand cation-exchange capacity, a measure of how well soil particles can retain positively charged ions (ex. calcium, magnesium, potassium, sodium, aluminum, etc.)7,8. Because of the better soil quality in the vicinity of Faidherbia albida, maize yields have been reported at 200-400% above the national averages in Malawi and Zambia9. Synthetic fertilizers containing nitrogen, phosphorus, and potassium are not used or available in many areas of the Sahel. Farmers have come to rely on Faidherbia albida as a technique in conservation agriculture.

Faidherbia albida in the Dry Season

During the dry season Faidherbia albida is fully foliated. It provides shade for people, livestock, plants, and the soil. The shade helps soil retain moisture, a precious resource during the dry season. In fact, soil water retention can increase by 40% under the foliage of Faidherbia albida than in an open field6. In the Sahel, soil surface temperatures can climb as high as 140˚F. .These extreme temperatures will stunt crop growth and may cause crop failure. The shade provided by Faidherbia albida controls the soil surface temperature and allows the farmer to grow a wider range of crops, as the farmer is no longer limited to only the most heat tolerant of species7. 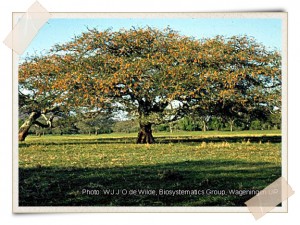 Another advantage of having foliated trees during the dry season is that the leaves and seed pods can be used to feed ruminants. Feeding livestock can be difficult when resources are so limited by the minimal rainfall. Faidherbia albida is a leguminous tree, meaning it has the capability to fix atmospheric nitrogen. Nitrogen is a necessary component in proteins, and therefore legumes and leguminous trees are an important source of protein for ruminants in general. During the dry season their role is even more significant, as most trees are defoliated and grasses lose nutrient quality. The grasses alone cannot provide enough protein to keep livestock healthy10. The foliage of Faidherbia albida is used for fodder, and the seed pods are a palatable supplement to the animals’ diets. The pods can be used for dairy cows and goats. Goats especially enjoy Faidherbia albida and have been found to prefer it over other forage species11. A final additional benefit of foliage in the dry season is that animals will tend to congregate in the shade of the tree where they can eat fallen seed pods. The animals’ excrement in turn fertilizes the Faidherbia albida tree and any crops planted beneath its limbs, completing a complex nutrient cycle involving the soil, Faidherbia albida, crops, animals, and people.