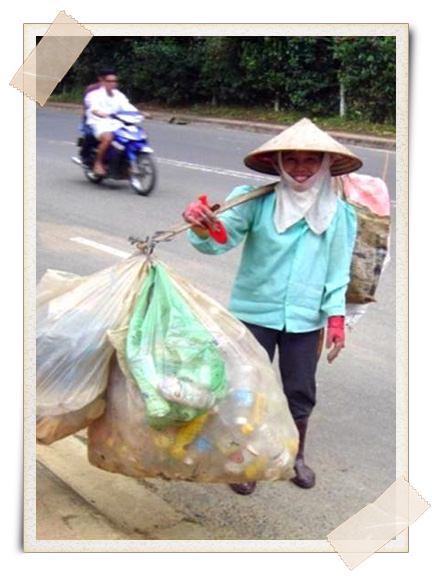 If bio-waste is stored and processed on site, and is not commingled with other types of residential waste, then it becomes a lot easier for scavengers to hand sort and recover recyclables. Both the quantity and quality of recyclables recovered by scavengers will greatly increase.

Since no large company, private or public, has ever been able to compete with scavengers in the recycling of residential waste in Vietnam, it would be unwise to exclude their involvement in any proposal to dispose and recycle residential waste(1). The lady referred to in the introduction is, no doubt as you guessed, a scavenger (see here her picture). Scavengers are the only people in Vietnam who know how to make money in the initial collection of raw waste from households. Scavengers who work landfills do not have to buy waste, and therefore they can make as much as 100,000 VND or $5.00 USD per day.

1. by protecting them from mafia middlemen who typically exploit their labor;
2. by encouraging them to form cooperatives free of middleman control;
3. by helping them to negotiate and obtain the highest prices for their recyclables;
4. by equipping them with gloves, face masks and other safety equipment;
5. by monitoring their health, especially their exposure to toxic substances;
6. by leveling fines on households co-mingling food waste with everything else;
7. by granting tax incentives to companies manufacturing goods from recyclables recovered by scavengers;
8. by restricting the import of recycled materials into Vietnam that undermine the scavenger economy;
9. by providing scavengers with carts that would allow them to transport waste with ease and efficiency;
10. by greatly expanding the scope of their activities;
11. and most importantly, by continually celebrating their status as the champions and heroes of the entire recycling effort in Vietnam.

Only by empowering scavengers, greatly expanding the scope of their activities and maximizing their profitability, will a sound micro-economic base be created that permits virtually all household waste to be recycled properly. The definition of the word “scavenger” has to be expanded to include many people who would not normally fall into this category.

If bio-waste is source-separated and processed in mesophilic bins, scavengers should be able to recover well over half of the remaining waste. Only a small percentage of the residential waste stream remains.

The first step in processing this remaining waste would be to shred it to a grain size less than 60 mm. Shredding is needed to liberate organics from inorganics. This would be followed by screening at about 20 mm. The accordion screen is a flexible, non-blinding screen that is ideal for such waste applications. The plus-20 mm fraction would be separated manually by scavengers into two groups: organic and inorganic. 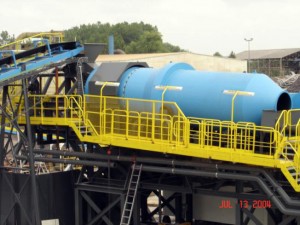 The minus-20 mm fraction, too small for hand separation, can be separated by means of a dense medium separator. These waste separators employ inexpensive sand in suspension as a separating medium(2).  The grain size of the sand situates between 15 and 50 microns. These separators operate at a density of 1.6, neatly separating the minus 20 mm fraction into organic and inorganic fractions. Some of these separators are quite big and can process up to 80 tons per hour. They have been installed at some of the largest recycling centers in the world, both in Europe and the USA.

The incineration of PVC produces dioxin, the active ingredient in Agent Orange, correctly labeled as one of the most deadly substances known to mankind(3). Incineration without separation is a mindless waste of money. It puts at risk the health of plant workers, and it inevitably does great damage to the surrounding environment.

Incineration makes sense, therefore, only if it targets non-biodegradable, non-recyclable and non-toxic waste of a relatively high calorific value.

At times the organic fraction isolated from municipal solid waste by means of these sand separators has a calorific value as high a 6,500 kcal/kg, and generally it is so clean (that is, free of mercury, lead, thallium, cadmium and so forth) that it can be routed to cement kilns as an alternative fuel. These dense medium separators are also used to isolate PVC from waste-derived fuels going to cement kilns. But in this instance, separations are made at a 1.25 density. At this density, PVC sinks, and almost all other organic materials float. These separators are also used to recover copper wire from waste-derived fuels. Copper catalyzes the formation of dioxin in cement kilns, and it must be accurately isolated and eliminated.

HOLCIM in Vietnam has set up numerous recycling programs where various types of waste are routed to cement kilns.4 Making cement is a high-temperature process, and the residence time of materials in cement kilns is far longer than in incinerators. With their high temperatures and long residence times, cement kilns are quite effective in cracking and destroying many pollutants, including dioxin. Ash within cement kilns gets vitrified, is rendered inert and harmlessly remains within the cement.

Unfortunately cement kiln operators tend to be quite selective in the quantity and type of waste that they want, and generally they do not accept all waste. Therefore there is always a niche that incineration should occupy within a sound waste management strategy. The most obvious use for incineration heat lies in power generation. Since incinerators would only receive waste of a relatively high calorific value, they would not have to utilize natural gas as a topping fuel in order to attain high operating temperatures. Unlike owners of coal-fired power stations, incinerator owners would pay nothing for fuel – in this case, a waste-derived fuel of a calorific value similar to that of many steam coals. In other words, the incineration of waste, within a framework of source separation, scavenger separation and dense medium separation, can easily become one of the most profitable means of generating electricity.

The second installment in the series Making Waste our Greatest Resource.  Read the first installment here: The Small-Scale Production of Food, Fuel, Feed and Fertilizer

Notes:
(1) On the importance of scavengers throughout the world in the recycling of waste, please see:
http://www.nytimes.com/2009/08/05/opinion/05chaturvedi.html?th&emc=th
(2) This dense medium process is fully described at: http://www.esrla.com/pdf/separation.pdf
(3) “The EPA makes no bones about the chemical’s potency, saying that dioxin, a known carcinogen, is the most deadly substance known to humankind.” See: www.myhouseisyourhouse.org/new_green_pdf/revolution.pdf
(4) See for example: http://www.adidas-group.com/en/sustainability/Environment/case_studies/2007_waste_co_processing_vietnam.aspx