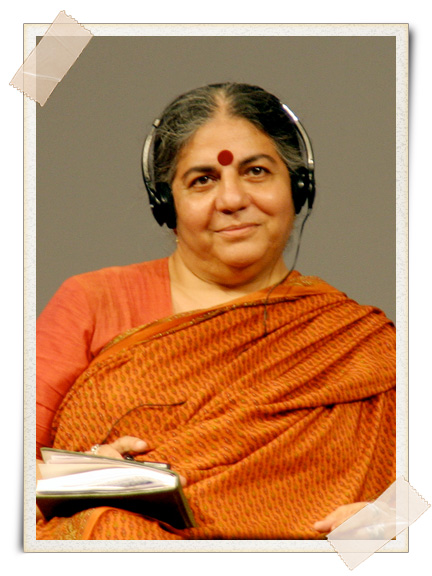 Dr. Vandana Shiva needs little introduction as a prominent environmental, social justice and anti-GM activist.  In 2010, she received the Sydney Peace Prize and was named by Guardian UK in March 2011 as one of the top 100 women in the world.

In the following interview, she explains the work done at the organisation she founded in 1987 – Navdanya Biodiversity Conservation Farm and Bija Vidyapeeth, the research and training farm. She reiterates that ecological farming is pro-peace, pro- biodiversity, pro-culture and pro-livelihood for the poor.

She spoke to us recently during “Grandmother’s University” at Navdanya, Dehradun, India.  The three day course was intended to celebrate Traditional knowledge, Biodiversity and Sustainable livelihoods in an era of globalisation where these are coming under increasing pressure. Not only is this traditional knowledge disappearing, knowledge as a commons is being appropriated and patented by corporations to be sold for abnormal profit.

The participants of the course interacted with the Garhwali women of the Himalayan hills, who had traveled far to teach us some of their wisdom.

The wisdom of grandmothers is in Dr Shiva’s words, “our capacity to love, unconditionally. In our society of competition, of insecurity and fear, that steadiness of love and compassion is brought to the next generation. Just because they are grandmothers, they have a long view. It’s called sustainability in today’s jargon. It’s really a thinking about future generations – not just of me, myself, today.”

Dr. Shiva answers here questions about the myth of GM, how to feed cities, the shadows of growth and development, and the role of civil society.

The importance of saving seeds:
We visited the seed bank within the Navdanya Biodiversity farm, which distributes valuable traditional seeds to farmers.  By interacting with the co-ordinators of Navdanya – Rukmini who oversees about 100 villages in the Garhwal region (Uttarakhand district, N. India), and Jumana who works with farmers in the Vidarbha region of Maharashtra, which has the maximum number of suicides in the country due to the economic hardships caused by Bt Cotton; the importance of saving traditional seed varieties against the onslaught of hybrid and GM seeds became amply clear.

Navdanya is now a network of seed keepers and organic producers across 16 states in India. It has helped set up 54 community seed banks across the country, and has trained half a million farmers in sustainable agriculture. It is also actively involved in reviving indigenous knowledge, creating awareness about the problems of GM foods and the rights of people against biopiracy in the face of globalisation and climate change.

Here’s a recording in part, of a session by Dr. Vandana Shiva at Navdanya, where she clearly explains four kinds of seeds – open pollination, green revolution varieties, hybrid varieties and GM seeds. This distinction is fundamentally important to understand the arguments against genetic engineering.  She also describes how the cost of GM seeds and pesticide use soar astronomically, which are major factors behind the indebtedness and consequent suicide of farmers.   (Kindly excuse the poor lighting conditions in the room, which is more than made up by Dr Shiva’s articulate discourse)

About the Writer:
Bhavani Prakash is the Founder of Eco WALK the Talk .com. She is passionate about the role of individuals and communities in bringing about the much needed change we need to see in the world.  She was an economist in her previous avatar, and is now an environmental and social justice activist using social media as well as offline community participation in her advocacy of a greener, fairer and happier planet. She writes and conducts talks and workshops on sustainability and can be contacted at bhavani[at]ecowalkthetalk.com. Follow Eco WALK the Talk on Facebook, Twitter, Linked IN and YouTube.