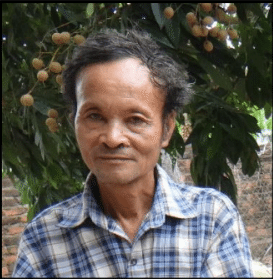 As a boy, Dam Van Vuong  lived on his parents’ farm in Hanoi, Vietnam. From a young age Vuong felt farming wasn’t his calling. He wanted something new, something different, so he pursued his dream of becoming a mining engineer. After completing his studies, he proudly worked in the mines and lectured at a college in Quang Ninh Province.

Throughout his career, lessons from his agricultural upbringing remained with him. When in the mines, he recognized that the frequent use of TNT destroyed the surrounding natural environment and that what people obtain from mining is less beneficial than what is destroyed in the process. It was this realization that drew him back to agriculture.

Mr. Vuong started his own farm in 2012. Drawing from his limited childhood knowledge, he knew worms were “a farmer’s friend” and decided to use vermiculture to build healthy soil. He gathered information from the internet but felt there was an important component missing: microorganisms. He studied microorganisms and how to incorporate them into a farm. Eventually, he created a technique for feeding his red worms effective microorganisms (EM) in order to create rich, healthy soil.

Vuong mixes cow manure and organic matter (he uses Water Hyacinth), which he inoculates with EM and leaves to sit for one week. He then adds the red worms, feeding them every three days. Once there is enough compost, he adds more EM. This eliminates odor and reduces fungi and other bacteria, which can be harmful to plants. The end result is a beautiful black soil.

Mr. Vuong has turned his technique into a business. He owns a soil farm, where he uses his technique to make compost that he sells to local farmers. A member of a Forum for Agriculture in North Vietnam, he believes that we need to move away from chemicals towards more natural systems to improve people’s health and the environment–especially our soils. He believes his technique of using EM with vermiculture is one way to achieve this, which is why he shares his story and technique widely.

Mr. Vuong’s compost has enabled the farmers in his community to eliminate the need for and use of chemical fertilizers, which has far-reaching positive effects on the environment and his community member’s health. Fewer synthetic fertilizers means less chemical runoff (which has extensive negative impacts such as contaminated groundwater and aquatic dead zones). Additionally, it reduces human exposure to toxins. Ultimately, compost reduces dependence on fossil-fuel-based inputs. In the long term, Vuong’s compost improves the quality of the soil (chemical fertilizers deplete soils over time) by creating a healthy micro-ecosystem.

In collaboration with Vietnamese organizations i-Nature and Center for Creativity and Sustainability, A Growing Culture helped Mr. Vuong document his technique. Read more about the documentation project here.